From dividends to growth to overall stability, these stocks will give your portfolio a great mix.

Healthcare was a safe place to invest your money even before the pandemic. But now -- with one in three people who've been hospitalized with COVID-19 facing long-term health problems after discharge -- demand could heighten beyond the normal care that will resume post-pandemic. And that's why you should consider adding some top healthcare stocks to your portfolio, if you haven't already done so.

Three healthcare stocks you should be able to comfortably hold for at least the next decade are Abbott Laboratories (ABT -0.56%), Johnson & Johnson (JNJ 0.09%), and Intuitive Surgical (ISRG -0.68%). From testing to robotic surgery to vaccines and pharmaceuticals, they will give you exposure to many different areas of medical care. 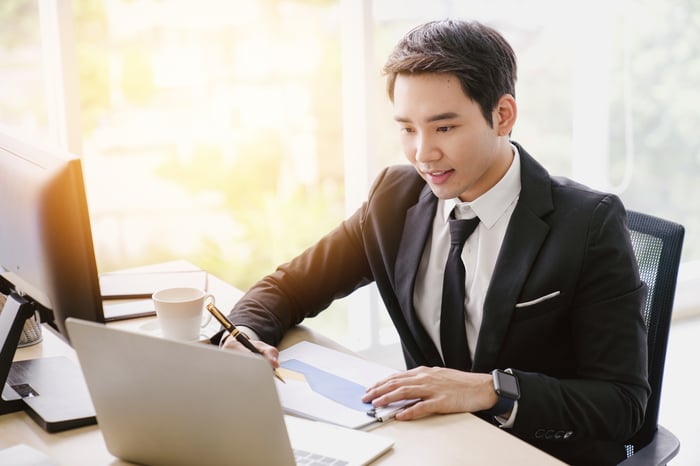 Abbott is a top healthcare stock, as its business is both versatile and robust. It made headlines last year when it unveiled a rapid $5 COVID-19 test that could deliver results within 15 minutes. While mass vaccinations are reducing demand for testing, given the ongoing health problems the coronavirus appears to cause, it's possible the company's tests will continue to be needed.

In 2020, sales of $34.6 billion represented an 8.5% rise, and a big part of that was due to testing. The company's diagnostics segment generated $10.8 billion in revenue, which was more than 31% of its top line (in 2019, the segment brought in 24%), making it easily the company's best-performing division.

Even if demand for testing does largely subside, remember that Abbott's operations are vast. Its medical device business (the largest component of its revenue) and its nutritional offerings help to ensure that the company isn't too dependent on any one revenue source. That stability means you won't have to worry about the business or its bottom line, which has been more than 10% of revenue for the past two years.

Another great reason to hold the stock is that it pays a dividend that yields 1.5%, which is right in line with the S&P 500 average. And with a payout ratio of just 34%, it is a solid income stock that is on the cusp of becoming a Dividend King, having raised its payouts for 49 years in a row.

Whether you are looking for stability or just a great source of recurring income, Abbott is a stock you should consider for your portfolio.

A dividend payer with an even more storied history, Johnson & Johnson raised its payout in April for the 59th year in a row. At 2.6%, its yield is higher than Abbott's, and its payout ratio of 53% shows no reason for concern.

But the dividend is just one reason to like Johnson & Johnson. The company's COVID-19 vaccine is one of three that have been granted an emergency use authorization from the U.S. Food and Drug Administration (the others are from Moderna and Pfizer/BioNTech). And with multiple variants of COVID-19 creating new issues, annual booster shots may be necessary, potentially delivering multiple years of recurring revenue for Johnson & Johnson. This year alone, the company could generate up to $10 billion in revenue from its vaccine.

Health officials hit pause on the company's vaccine earlier this month after it was linked to blood clots. However, the rollout has since resumed as the government believes the benefits far outweigh the risks. Out of almost 8 million people who were given the vaccine, 15 had blood clots. Given the relatively low risk, it's not likely that will be enough to discourage people from taking the vaccine. But with $80 billion plus in annual revenue, its vaccine sales aren't exactly going to make or break the company, either.

Like Abbott, Johnson & Johnson is well-diversified and generates revenue from multiple areas -- this company will likely do well even if its vaccine struggles to generate the sales the company is hoping for. Pharmaceutical sales grew 8% to $45.6 billion in 2020 and accounted for more than half (55%) of the company's total revenue of $82.6 billion. Medical devices contributed $23 billion (28%) despite falling 12%, and consumer health sales rose by 1% and added the remaining $14.1 billion (17%) in revenue.

Although its sales were flat last year, strong demand for its vaccine could change that in the years ahead and turn Johnson & Johnson into a more attractive growth stock. The company will also have more opportunities in treating autoimmune diseases after acquiring Momenta Pharmaceuticals last year in a move that will bolster its pipeline. One of the key assets it acquired in the deal was nipocalimab, a monoclonal antibody that could generate over $1 billion in peak annual sales all on its own. These exciting growth opportunities combined with the company's diverse operations and strong dividend make Johnson & Johnson an investment you can buy and forget about, for at least the next decade.

The only stock of these three that doesn't pay its shareholders a dividend is Intuitive Surgical. But it more than makes up for that with growth opportunities. Robot-assisted surgery is an exciting area to invest in with great potential for long-term returns; according to the website ResearchAndMarkets, the global market for robotic surgical devices will be worth $4.7 billion in 2030 and is growing at a compound annual rate of 14.1%, which will rise to 15.4% in 2025.

Intuitive Surgical's iconic da Vinci surgical devices can tap into that potential. And if there are more procedures due to the long-term effects of COVID-19, demand could be even stronger than what analysts are currently forecasting, as they likely wouldn't have factored that into their projections. Thus far, the pandemic has hurt the company's business because hospitals have been deferring procedures. But as coronavirus hospitalizations come down, which should happen as more people are vaccinated, that should clear the way for hospitals to resume regular day-to-day operations.

And there are already signs of that. On April 20, Intuitive released its first-quarter earnings for the period ending March 31. The number of da Vinci procedures rose 16% year over year. That was a sharp improvement from the previous quarter, when the number of procedures was up by only 6%. And for all of 2020, the growth rate was just 1%.

The company also shipped 298 da Vinci surgical systems during the first quarter, a 26% increase from the prior-year period. Although it shipped more devices (326) in the fourth quarter of 2020, that was down 3% from the previous year.

Things are looking up for Intuitive Surgical as hospitals look to be getting back to normal. And with the industry experiencing significant growth, this stock could deliver some great returns for investors over the next 10-plus years.