Please ensure Javascript is enabled for purposes of website accessibility
Log In Help Join The Motley Fool
Free Article Join Over 1 Million Premium Members And Get More In-Depth Stock Guidance and Research
By Jennifer Saibil - Apr 28, 2021 at 6:16AM

The credit card company has had a tough year, and it's not over. Does that take it out of the running for your portfolio?

American Express (AXP 1.28%), card issuer to the elite, is having a rough time exiting its coronavirus woes. Its stock tanked on its first-quarter earnings report after it missed its revenue forecast, but there were glimmers of a return to growth.

A unique model in several ways

American Express is the third-largest credit card company, but it works differently than Visa and Mastercard. Both of those companies are really payment processors that work with banks, bringing in transaction fees when a customer uses their branded cards, but sparing them any customer loans of their own. American Express, on the other hand, acts as its own bank, and was affected by the pandemic in similar ways to banks, including having to hand over millions of funds toward provisions for credit losses, taking away from the bottom line. 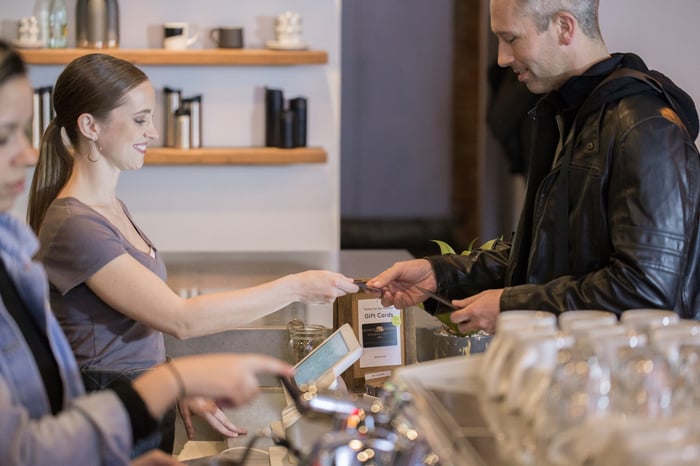 Despite that, American Express remained profitable throughout the pandemic.

In addition, American Express' clientele is generally in higher income brackets, and it has a large focus on travel and entertainment. Having a more well-off client base is typically an advantage, but it became a liability while people stayed home and saved their money for essentials.

Visa and Mastercard are also both still reporting year-over-year sales decreases. Visa's revenue was down 2% for the quarter ending March 31, following a 6% drop for the period ending Dec. 31. Mastercard reports first-quarter earnings on Thursday.

Despite the sales miss, American Express still reported a lot of progress in the first quarter. Sales dropped 12% (slightly more than analysts were expecting), but minus travel and entertainment, spending increased 11% from the corresponding quarter in 2019. Sales decreases have improved in each consecutive quarter of the pandemic, and the past few weeks, as vaccines have been rolled out, there's been a notable increase in travel and entertainment spending.

That's an important development for American Express, because until travel resumes, cardholder spending is likely to remain suppressed. An internal report found that 76% of respondents are planning a trip even though they can't travel yet, and 64% said they miss traveling so much that they would be willing to forgo a month of social media to travel.

Earnings per share came in at $2.74 compared to the estimated $1.61. There were other bright spots as well, such as improved retention rates and fee-based cards up 35% from the fourth quarter.

Over the past few years, American Express has invested in its digital features, offering financial technology solutions for businesses and individuals. A record 88% of U.S. cardholders made digital payments in the first quarter. The company is also making progress with Kabbage, a small business fintech platform that it acquired last year, which it makes available for its merchant base.

American Express now offers "Pay It, Plan It," a buy now, pay later (BNPL) feature for cardholders. BNPL has become a popular way to pay, with PayPal Holdings launching it and companies such as Affirm Holdings making it available through many merchants. American Express cardholders made 6 million purchases with the Pay It, Plan It feature and created more than $5 billion in accounts receivable. Pay It, Plan It allows customers to make bigger purchases than some of them otherwise would, and this could help increase spending.

Finally, the company is making headway into its China bid, where it was the first foreign payments network approved to clear transactions last June. It's already added 14 million merchants there and expects it to become a significant market over time.

As for the rest of 2021, CFO Jeff Campbell reiterated that the company expects travel to increase to 70% of pre-pandemic levels by Q4, and to completely recover by 2022.

American Express' stock has gained 75% over the past year, and despite the stock's decline after the earnings report, it's still up 24% year to date after resuming its climb to all-time highs. Investors are confident in the long-term outlook, and American Express is a great stock to consider for your portfolio.