Please ensure Javascript is enabled for purposes of website accessibility
Log In Help Join The Motley Fool
Free Article Join Over 1 Million Premium Members And Get More In-Depth Stock Guidance and Research
By Alex Carchidi - Apr 28, 2021 at 7:42AM

If you wear contact lenses or eyeglasses, you're in STARR's target market.

Quietly growing companies in mundane markets are often quite sneaky. With the possible exception of Warren Buffett, few people have the foresight to see something like a gum company as a lucrative investment. But sometimes there's a glimmer of greatness in unlikely places upon closer inspection.

In that vein, vision correction may not seem like a white-hot sector that demands immediate investment. Eyeglasses couldn't possibly be a major growth segment, right? While it doesn't make glasses, STAAR Surgical (STAA -3.41%) does make implantable lenses for vision correction, and it's been growing like wildfire for years. There might not be anything that's a sure thing in the stock market, but I'm of the opinion that this company is pretty darn close to a guaranteed win long-term. 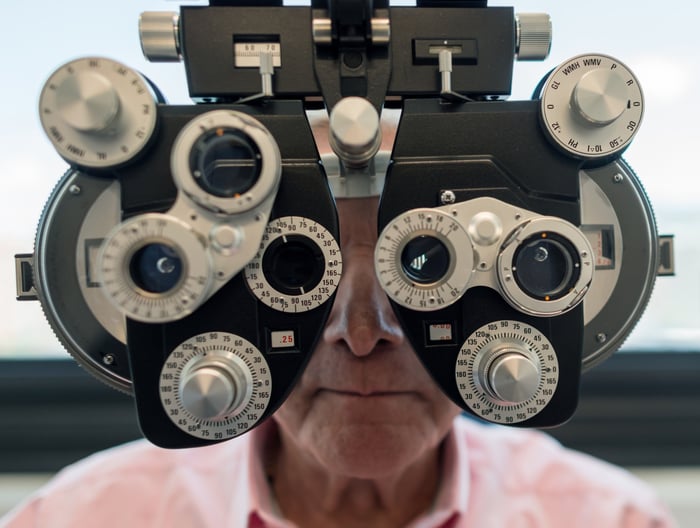 Vision correction is an evergreen source of revenue

As powerful as human eyes are, they're not perfect. Eyeglasses have been around for centuries, and contact lenses have been around for decades. STAAR's bread and butter is its EVO ICL implantable collamer lens product, which constituted 86% of its yearly sales as of 2019. Once an ophthalmic surgeon implants the lens just behind the iris, the patient's vision is durably corrected after their eye heals. Compared to other interventions like eyeglasses or contact lenses, the EVO ICL is pricier, but it's more convenient in the long run. Patients with implanted lenes don't need to purchase consumables like saline or fresh contact lenses, nor do they need to keep a supply of microfiber cloths and isopropyl alcohol as is necessary for cleaning glasses. Plus, implanted lenses are impossible to lose or damage by mishandling because the patient never needs to handle them in the first place.

While the company is profitable and growing its quarterly revenue by 18.3% year over year, it's also in the long run where shareholders stand to gain the most from an investment made today. By 2050, more than half of all people may need vision correction for their myopia. That's an even higher percentage than now, when more than 25% of people need it. The upward trend is likely a result of the modern lifestyle, wherein people spend an increasing amount of time doing myopia-inducing activities. Research suggests two main causes: Looking at electronic devices for extended periods of time, and a gradual reduction in outdoor activities.

STAAR will experience enduring and increasing demand for its products over time so long as people keep looking at screens for a large portion of their waking hours.

STAAR is the leader in its markets

Aside from its growing market, STAAR is currently a leading competitor in its industry as a result of its consistent advertising and sales activity. While the refractive lens market only grew by a few percentage points in 2019, STAAR grew by 33%. This means that the company is gobbling up market share from competitors. That's doubtlessly due to its increasing penetration of the Chinese market, where it has posted back-to-back increases in quarterly sales revenue in excess of 34% year over year. It plans to deepen penetration of the European and South Korean markets next. If its yearly sales figures after deepening its newest markets in 2018 and 2019 are any indication, upwards of 20% revenue growth is on the table for the next couple of years.

Management is applying consistent effort to increase its margins over time while also working to increase market share. From the low point of 2016, when its trailing operating margin rested at negative 15.3%, cost savings and other improvements led to the margin rising to 4.83% in 2020. Even during the disruption of the pandemic when its manufacturing facilities were forced to halt production, STAAR was also able to improve its gross margin year over year. 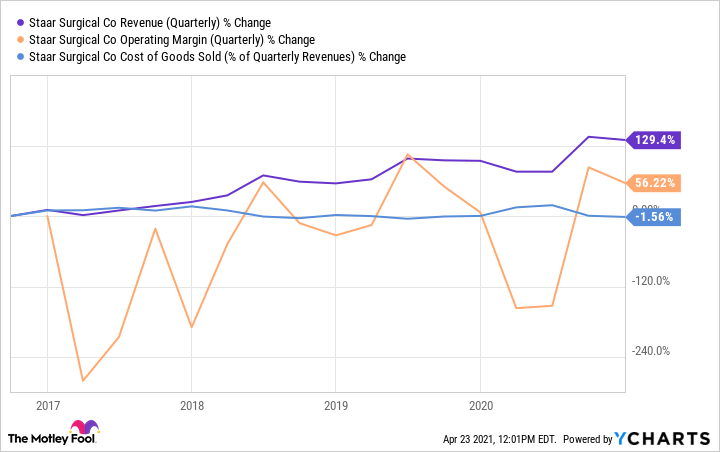 Is now the right time to buy?

While there's no specific set of catalysts which investors should be on the lookout for, there also aren't any major downside threats on the radar. Aside from its sky-high price to earnings multiple of 1,110, that is. So, buying the stock now could be the right call, with the understanding that it would likely be quite vulnerable in the event of a correction. Still, with a long-hold play like STAAR Surgical, the most important thing for shareholders to do is to establish their position and then sit back and wait. The company's future holds great growth, and the longer potential buyers sit on the fence, the more likely they are to miss out on this stock's compounding value.