Please ensure Javascript is enabled for purposes of website accessibility
Log In Help Join The Motley Fool
Free Article Join Over 1 Million Premium Members And Get More In-Depth Stock Guidance and Research
By Courtney Carlsen - Updated Apr 29, 2021 at 10:36AM

The private student loan provider saw its stock at bargain prices last year amid the pandemic.

In 2020, a confluence of factors arising from the coronavirus pandemic hurt student loan lender SLM (SLM 3.76%), better known as Sallie Mae. The lender's stock price took a hit as a result, stuck as low as $6 at one point -- down 50% from its February peak. At one point, the lender saw its price-to-earnings (P/E) ratio drop under 4.

The drastic drop in stock price had gone too far, and the company decided to do something about it. In the latter half of last year and into this year, Sallie Mae committed to buying back a significant amount of stock at rock-bottom prices. This has helped boost the stock's price by 55% this year as of Thursday morning's prices.

Despite buying back nearly 49 million shares during the first quarter, Sallie Mae is still priced cheap, with a P/E ratio just over 6. With a return to normalcy likely on the way in the second half of this year, the company's CEO believes the price is still too cheap, and is looking to take advantage of a strong loan market to raise cash.

A return to college campuses

When I last wrote about the student lender, declining enrollments and loans in forbearance were the story. According to the National Student Clearinghouse Research Center, postsecondary enrollment was down 3.3% in the fall, with freshmen enrollment down 13%. These numbers improved modestly in the spring semester, with enrollments down 2.9% from the same semester last year. One positive for the lender is that, despite the pandemic, graduate enrollments are actually up 4.3% compared with last spring. 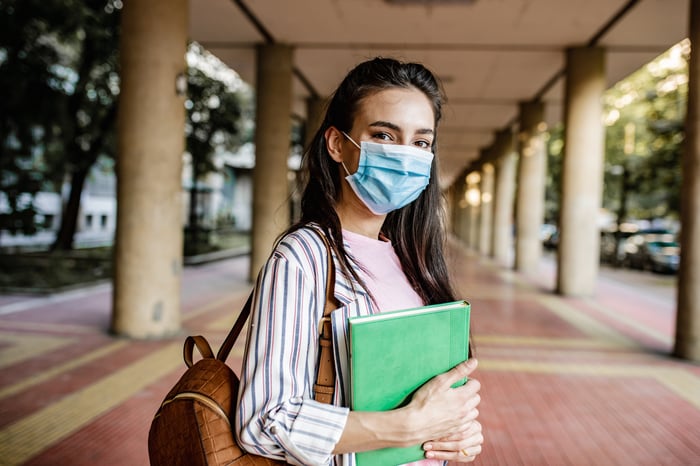 With that being said, the company expected to see 6% to 7% growth in private education loan originations for the full year 2021. Embedded in those expectations was a decrease in loan originations during the first half of the year followed by a rebound in the fall. So far it has played out that way.

CEO Jonathan Witter is encouraged by the current trends with vaccine distributions and what it means for the broader economy. As we trend more toward normalcy, many schools have given the green light to students to come back to school on campus in the fall. This would be a positive development for the lender.

The lender has reason to be encouraged. Loan quality on current loans issued remains high, and loan performance is in line with previous years, showing minimal impact from the pandemic thus far. The average FICO score for borrowers is 751, compared to 746 last year. Additionally, loans 30 days delinquent and charge-offs were 2.1% and 1.3%, respectively, down from 2.8% and 1.5% in the fourth quarter last year.

The company still has $1.2 billion in allowances for loan losses. This should be more than enough, even with management expecting delinquent loans and charge-offs to increase to 3% and 1.8% by year-end. Sallie Mae sees conditions improving with originations growing in the fall semester and beyond.

Taking advantage of a natural arbitrage

Witter says the reason the company sold a big chunk of loans is to take advantage of market conditions. He says there is a natural arbitrage in the whole loan markets and equity markets. Specifically, he says conditions for selling loans are favorable and that the company will do this to generate cash flow and then return that cash to investors in the form of share repurchases at a time when the company's stock valuation is cheap.

The stock has benefited, but will the business recover?

Witter has said that as long as the arbitrage exists between the whole loan markets and the company's share price, it will continue to operate a hybrid model of holding some loans while selling others, and using those proceeds to buy back stock. These efforts should continue to support the stock price throughout the year.

While there's reason to be optimistic, the improvement the business is seeing hasn't entirely come to fruition. Yet the stock is moving as if it has, thanks to the company's aggressive share repurchase strategy. The drastic reduction in share count has allowed the company to raise its guided diluted earnings per share range to $2.95 to $3.15, according to generally accepted accounting principles (GAAP), up from its previous guidance of $2.20 to $2.40.

Sallie Mae has gone on an incredible run, with the stock up 55% year to date. The company's aggressive share repurchase strategy has certainly served as a tailwind for the stock, and likely will for the rest of the year. The stock is still cheap, and its P/E ratio of 6.3 still puts it near the low end of its 10-year valuation range.

For investors it's encouraging to see the company aggressively returning capital to shareholders. However, improving economic conditions and student enrollments are the real story here. For me, I'd like to see these improvements in the company's earnings, which would be indicated by a growing loan portfolio and growth to the top and bottom lines. And if private loan originations grow in the mid-single digits by the end of the year that management expects, investors have reason to be encouraged about the future of the lender that holds a 54% share of the private student loan market.

Students are Returning to Campus: Is This Deep Value Stock a Buy?