Please ensure Javascript is enabled for purposes of website accessibility
Log In Help Join The Motley Fool
Free Article Join Over 1 Million Premium Members And Get More In-Depth Stock Guidance and Research
By Jim Halley - Apr 29, 2021 at 9:41AM

Flowers Foods, one of the largest makers of packaged bakery goods in the United States, is a great stock for retirees no matter how you slice it.

Safe, consistent, income growth –- that's what retirees like to see in their investments. What they don't want is drama for their equities, meaning they want dependable white-bread type investments. What could be more white bread than Flower Foods (FLO 1.37%), which produces Wonder bread and other well-known bakery brands?

The company's shares are up nearly 8% over the past 12 months, and nearly 5% so far this year. That's nothing spectacular considering how well the overall market has done, but what you get with Flowers is consistency. the stock's five-year beta -- a measure of the stock's volatility versus the S&P 500 -- is just 0.280. In layman's terms, Flower Foods stock is 72% less likely to fluctuate and exhibit volatile behavior when compared to the broader market over the long run. What's also predictable is the company's commitment to a dividend. 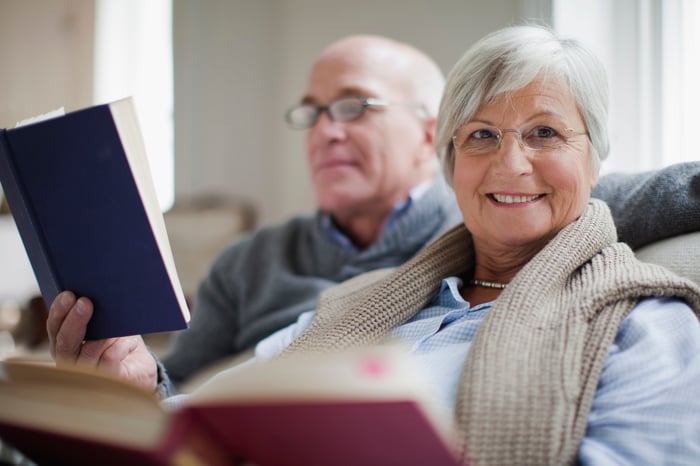 A company focused on making bread

Flowers Foods, based in Thomasville, Ga., has been in business since 1919. Its brands include Nature's Own bread and buns, Canyon Bakehouse, the top gluten-free selling bread in the U.S., Tastykake cakes, pies and donuts, Dave's Killer Bread, the top-selling organic bread in the U.S., Mrs. Freshley's baked snacks, and of course, Wonder bread. The company said its brands reach 85% of the U.S. population, thanks to Flower's direct-store delivery.

The consumer staples company reported $4.4 billion in sales last year, up 6.4% year over year. While foodservice sales were down because fewer people went out to eat, the company did well enough in consumer sales to more than make up for the difference. Adjusted EBITDA was $522 million for 2020, up 11.9% year over year, though annual net income in 2020 was a reported $152.3 million, down 7.3% compared to 2019.

However, here's the bottom line: Flower Foods has been steadily increasing its sales and operating income over the last 10 years. 2020 was an affirmation to the bread-maker's resilience. 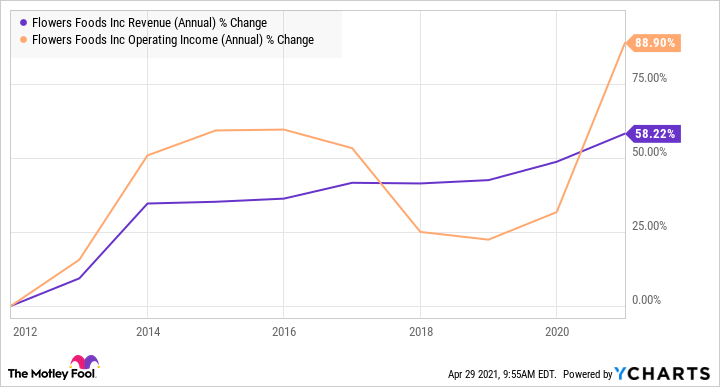 A growing level of debt is one concern

The company's payout ratio has declined over the past 10 years and its current rate of 46.3% means the dividend isn't likely to face a cut any time soon.

Though it has been around for more than 100 years, the company continues to innovate. Last year, it added several additions to its various lines, including gluten-free Canyon Bakehouse burger buns, and brioche bread for Nature's Own hamburger and hot dog buns and dinner rolls. This year, the company is adding rye bread to the Dave's Killer Bread selections and more gluten-free selections for the Canyon Bakehouse brand.

That innovation comes with a cost though. Thanks to plant improvements last year, the company has $1.32 billion in debt but only $307.5 million in cash and its debt has risen over the past few years. Last year, the company's debt to equity ratio went down a bit to 1.42, but that's still less than ideal.

The company's guidance for 2021 points to a drop in revenue between 2% to 4%. Last year, many traditional food companies did well because people ate more meals at home, so it's likely as more people go back to work, fewer meals will be eaten at home and that means fewer baked goods being consumed. 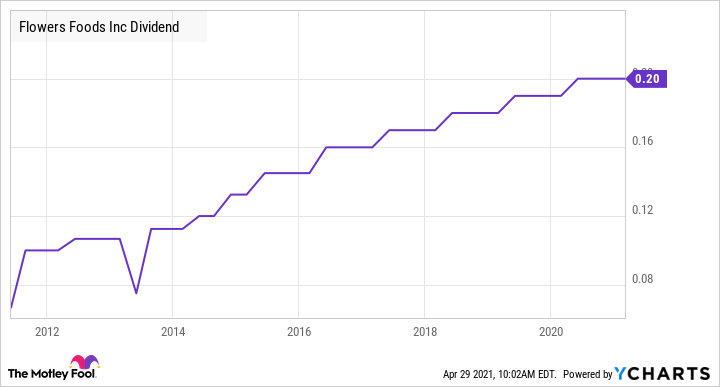 A company still on the rise

Though Flowers has been around more than a century, there's a lot of potential for growth with its health-emphasis brands, something CEO Ryals McMullian pointed to in his company's fourth-quarter earnings call. In its fourth-quarter report, the company said that yearly sales for Nature's Own were up 17%, Dave's Killer Bread sales had jumped 31% and Canyon Bakehouse saw a 36% rise.

The pandemic devastated many smaller bakeries that make health-oriented bread, but Flowers' overall strength puts it in a good spot to take over market share. When the pandemic hit and many companies had to deal with supply shortages, Flowers, already accustomed to panic buying during hurricane season, focused on streamlining its portfolio and focusing on its primary brands.

The company has done a good job of promoting its branded retail items, with revenue in that sector up 13.7% over the past year.

Flowers' emphasis on efficiency is paying off as well. Last year, gross margin was a reported 50% compared to 47.7% the prior two years.

There's also potential for growth in the industry overall. Bread is a staple in our diet and that's not likely to change anytime soon. According to a report from Mordor Intelligence, the compound annual growth rate for bread sales in North America is 4.8% through 2025.

There are a lot of reasons why Flowers is a good stock for retirees. Low volatility, a dividend that has been steadily increasing and predictable growth are the main ones.