Earnings season is reflecting a big bounce for this industry, but some wonder how much more upward momentum it could have.

Friday morning threatened to bring a downbeat end to what has been a strong week. Compelling earnings reports from some of the largest companies in the market had set a positive tone in recent days, but investors seemed reluctant to send major market benchmarks further into record territory despite encouraging signs of economic recovery. As of 11:15 a.m. EDT, the Dow Jones Industrial Average (^DJI 0.23%) was down 245 points to 33,816. The S&P 500 (^GSPC 0.36%) fell 29 points to 4,183, and the Nasdaq Composite (^IXIC 0.00%) dropped 74 points to 14,008.

In the past few weeks, we've heard from some of the biggest companies in industries like technology, banking, and manufacturing. On Friday, energy weighed in, as oil majors ExxonMobil (XOM -1.80%) and Chevron (CVX -1.32%) released their quarterly results. Their results reflected the substantial rise in oil prices from the pandemic-affected plunge in energy in the first quarter of 2020, but shareholder reaction seemed to raise doubt about how much further the energy industry will bounce back. 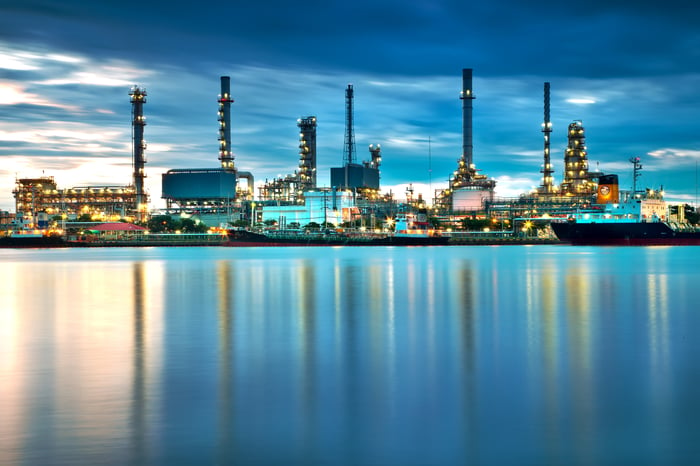 ExxonMobil gets back to business

Shares of ExxonMobil were lower by about 2% on Friday morning. The oil giant saw an impressive return to profitability, showing the success that the company has had in making the most of a tough environment.

ExxonMobil posted net income of $2.73 billion in the first quarter of 2021, reversing its $610 million loss in the year-ago period. The company boosted its production modestly to 3.8 million barrels per day on an oil-equivalent basis, incorporating both its crude oil and natural gas production. The biggest contributor to growth came from increased realized prices for energy products, with a 42% boost for crude oil and 33% for natural gas. Exxon's chemical business also performed well, with strong demand from industrial customers.

Not all of the news was positive. In the downstream refining and marketing business, margins rose slightly but remained near their lowest levels in a decade due to oversupply and high inventory levels. Winter storm disruptions also weighed on the division, although refining activity managed to come in roughly flat to where it was three months before.

Even as oil prices have largely recovered to pre-pandemic levels, Exxon's stock is still down 20% from where it was at the beginning of 2020. That implies either that share prices have further to rebound or that investors are skeptical that the bounce in energy will be able to last.

Meanwhile, Chevron shares were down more than 3% Friday morning. The company's results didn't look as upbeat as ExxonMobil's, which explains at least some of the weaker stock performance.

Chevron's business saw clear divisions between its upstream production and downstream refining and marketing operations. Segment net income for upstream was down about 20% from year-earlier levels, but much of that resulted from a one-time gain in the year-ago period. Earnings in the U.S. upstream market soared nearly four times year over year, as oil and natural gas prices soared. Domestic production levels were up only about 1%, however, and internationally, production fell 6%.

Downstream operations took a hit from a combination of lower margins and reduced throughput. Oversupply conditions seemed to weigh on results, especially in the international realm.

Chevron has managed to make it through a tough period in the oil and gas markets while still maintaining its balance sheet in healthy condition. It also recently boosted its dividend by $0.05 to a new quarterly payout of $1.34 per share, rewarding income investors.

Chevron and ExxonMobil have better opportunities with oil prices at current levels than they had this time last year. But there's plenty of uncertainty about whether further gains in energy will come in the near future.

If oil continues to rise toward the $100-per-barrel mark, then it could signal an economic boom that could help the sector take a leadership role in a bull market. Until evidence points in one direction or the other, however, shareholders need to be prepared for volatility among these and other energy stocks.