Please ensure Javascript is enabled for purposes of website accessibility
Log In Help Join The Motley Fool
Free Article Join Over 1 Million Premium Members And Get More In-Depth Stock Guidance and Research
By Beth McKenna - May 5, 2021 at 9:37PM

The 3D printing company now has more than a half-billion dollars in cash, which makes it ready to pounce on attractive acquisition targets.

Shares of Stratasys (SSYS 0.99%) fell 4.2% Wednesday, following the 3D printing company's release of its first-quarter 2021 results before the market open.

We can probably attribute a good portion of the stock's decline to market dynamics in general. Stocks in the technology realm -- especially those of companies that aren't profitable -- were under pressure Wednesday, driven by renewed concerns that inflation could increase and push up U.S. interest rates.

For some context, shares of Stratasys' rival 3D Systems dropped 2.6% Wednesday. (3D Systems is scheduled to report its Q1 results Monday, May 10. Here's what to watch in 3D Systems' report.) 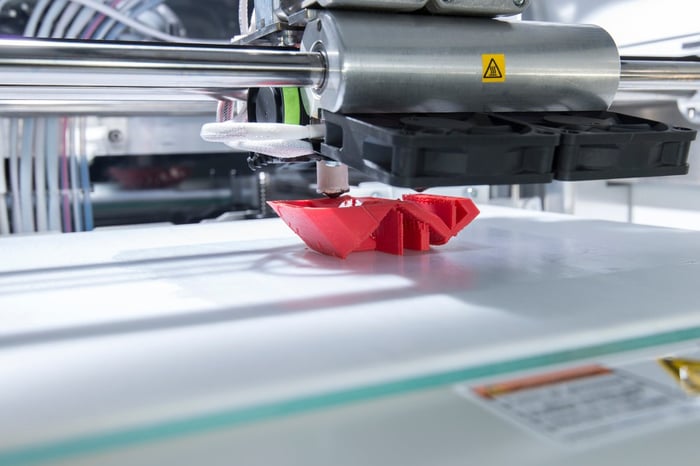 Wall Street was looking for Stratasys to post an adjusted loss per share of $0.06 on revenue of $132.3 million. So the company edged by the top-line expectation and hit the bottom-line estimate on the bull's-eye.

The company generated $22.8 million of cash from operations during the quarter, up from $11.3 million in the year-ago period. Thanks in part to a capital raise of $230 million, it ended the quarter with $530.4 million in cash and cash equivalents.

With more than a half-billion dollars in liquid funds and no debt, Stratasys' balance sheet is robust.

The 41% year-over-year surge in 3D printer revenue is a good sign. Sales of systems are generally a leading indicator of sorts. Assuming these systems are well utilized, investors can usually expect that growth in print materials will soon follow. This is important because print materials sport high profit margins.

Here's part of what CEO Yoav Zeif had to say in the earnings release:

I am pleased with our performance in the first quarter that drove 41% growth in system revenues. Thanks to our team's dedication and successful execution, Stratasys delivered solid results and is well-positioned at the forefront of our industry, as end markets continue to recover [from the COVID-19 pandemic] and 3D printing industry growth accelerates. [...]

With a fortress balance sheet and multiple growth opportunities in front of us, we are poised to build incremental value for our shareholders.

Expounding on Zeif's mention of the company's end markets continuing to recover, the pandemic caused the temporary closures of many companies in the industrial sector, which is a key vertical for Stratasys.

For the second quarter of 2021, management guided for revenue to grow in the mid-teens percentages year over year. That was in line with Wall Street's expectations, as going into the report, analysts were modeling for Q2 revenue growth of about 15% year over year.

A mixed bag of a report

In short, Stratasys' report was a mixed bag. The company's Q1 results on both the top and bottom lines were far from inspiring. But its 3D printer sales performance, ability to churn out cash from operations, and huge cash position are encouraging.