Please ensure Javascript is enabled for purposes of website accessibility
Log In Help Join The Motley Fool
Free Article Join Over 1 Million Premium Members And Get More In-Depth Stock Guidance and Research
By Zhiyuan Sun - May 5, 2021 at 6:25AM

An unknown biotech has turned its early investors into millionaires over the past month. Can it continue its momentum?

Keep in mind that this is still a development-stage firm with no drug or biologic yet on the market. What's behind such a monstrous rally? 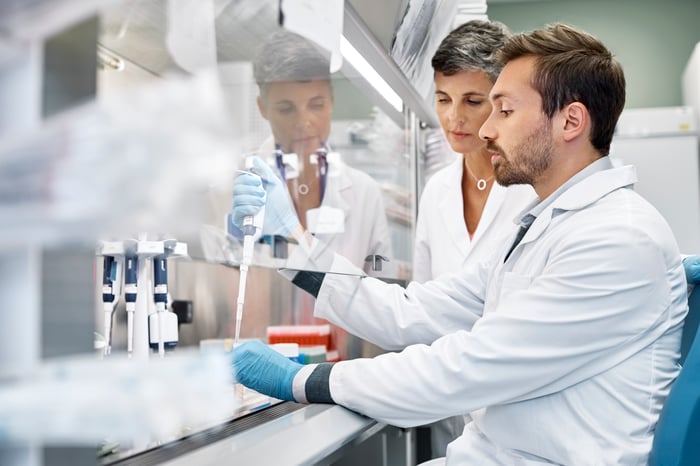 In April, the company secured an exclusive license from Factor Bioscience and Novellus Therapeutics to develop messenger RNA (mRNA) biologics. The technology previously received validation via the success of mRNA coronavirus vaccines, and can be applied to a variety of different fields. Brooklyn Therapeutics is looking to develop mRNA candidates that could enter clinical trials by 2024 for sickle cell anemias, monogenic disorders, and solid/liquid tumors.

Obtaining a preclinical mRNA license wasn't that groundbreaking. However, it did lead to renewed investor interest in the company's sole asset. Back in 2018, the company acquired IRX Therapeutics and its immunotherapy IRX-2. Brooklyn ImmunoTherapeutics is currently investigating IRX-2 for the treatment of head and neck cancer.

Results from a phase 2b controlled study are due by the first half of 2022. If it's successful, keep in mind that novel late-stage cancer immunotherapies such as this have been worth up to $10 billion, even for a few indications. So there is definitely a lot at stake.

What investors may not know is that IRX-2 has been in clinical trials for head and neck cancer for at least 20 years. In an open-label phase 1/2 study from 2005, the survival of 25 head and neck cancer patients who received IRX-2 was compared to those of 25 others in historical cases. Those in the intervention arm had a 56% overall survival compared to 21% in the historical control arm over four years. The p-value for the investigation was 0.03, which suggests that the results were statistically significant at the 95% certainty level.

But the results should definitely raise some eyebrows: The study took place at just one testing center in Mexico City. Moreover, both the IRX-2 patients and those in the historic group were treated by the same surgeon.

During another open-label study published in 2018 by the National Institutes of Health (NIH), 27 head and neck cancer participants who received IRX-2 had an overall survival of 65% by year five. However, that's not particularly impressive, considering that estimates for head and neck cancer survival range between 50% and 66%.

It's also impossible to deduce the efficacy of the therapy based on historical comparisons. Patients who enroll in clinical studies typically receive the best treatment and quality of care (due to generous corporate funding). These can include on-call investigators for patients who develop serious adverse events.

Right now, it's simply too early to speculate on the company's mRNA licensing deals. Similarly, I wouldn't bet on IRX-2 being a successful immunotherapy until I see the results compared to an actual control group. Unless you're fond of all-or-nothing gambles (without knowing the odds), it's best to stay away from Brooklyn ImmunoTherapeutics stock. As of its last annual filing, the company only had $851,000 in net assets, so it will probably take advantage of its latest rally and raise cash via equity financing soon.

Why Brooklyn ImmunoTherapeutics Stock Crushed It in April