Please ensure Javascript is enabled for purposes of website accessibility
Log In Help Join The Motley Fool
Free Article Join Over 1 Million Premium Members And Get More In-Depth Stock Guidance and Research
By Jason Hawthorne - May 5, 2021 at 1:28PM

Good news for the U.S. has been bad news for shareholders.

Although that is up 475% from the beginning of 2020, the drop leaves the stock down 60% from its highs in February. 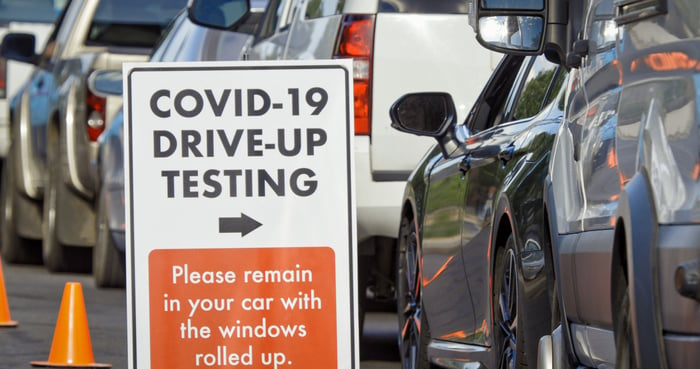 The success in rolling out COVID-19 vaccines has been the driver of Fulgent's continued sell-off this past month. In the fourth quarter, nearly 90% of revenue came from COVID-19 testing as opposed to Fulgent's core genetic testing. The distribution of vaccines and declining cases have resulted in about half the rate of testing compared to the beginning of the year. That's spooked investors who saw the company's volume grow to 3.2 million billable tests last year -- 230 times more than in 2019.

If COVID-19 testing does dissipate, that would leave shareholders with a growing, albeit smaller, business. Projected over a full year, its $37 million in core testing for the fourth quarter would leave the company trading at roughly 14 times sales. That's about twice as high as it entered 2020. Admittedly, COVID-19 isn't going away tomorrow. That said, investors aren't going to buy the stock if they think 90% of sales are drying up.

Fulgent reports earnings on May 6, and the stock may trade violently whether Wall Street interprets the update as positive or negative. The uncertainty surrounding how well COVID-19 testing is holding up, and whether core genetic testing can pick up any slack, creates a scenario where a large group of people will be surprised no matter what the company says.

Although vaccinations are going well, the company has agreements with several local governments, major companies, and school systems. That should create a soft landing for the COVID-19 business over the next year or two. Also, Fulgent's legacy business grew 43% in the fourth quarter -- fast enough to justify the current stock price as long as some COVID-19 testing persists.