Please ensure Javascript is enabled for purposes of website accessibility
Log In Help Join The Motley Fool
Free Article Join Over 1 Million Premium Members And Get More In-Depth Stock Guidance and Research
By Dan Caplinger - May 6, 2021 at 11:59AM

Stocks remained in somewhat of a holding pattern on Thursday morning, as investors tried to figure out the potential future course of the stock market despite a host of countervailing factors pulling indexes in different directions. Major benchmarks once again saw mixed performance, reflecting the efforts among market participants to rotate into the most promising stocks available. As of 11:30 a.m. EDT, the Dow Jones Industrial Average (^DJI -0.86%) was up 107 points to 34,337. The S&P 500 (^GSPC -1.29%) inched higher by 3 points to 4,170, but the Nasdaq Composite (^IXIC -2.01%) fell 58 points to 13,523.

Moderna (MRNA -2.60%) has been one of the most-watched stocks in the market over the past year, but even though the biotech stock announced favorable earnings results, investors are worried about the possible ramifications of efforts going on at the federal government level regarding its COVID-19 vaccine. Meanwhile, Uber Technologies (UBER -3.78%) and Fastly (FSLY -7.02%) both suffered declines after their respective earnings releases. Below, we'll get into the details.

Shares of Moderna were down almost 8% on Thursday morning. Even though the biotech's first-quarter financial report gave shareholders plenty of reason to celebrate, worries about how much money Moderna will be able to reap in the future weighed on investor confidence. 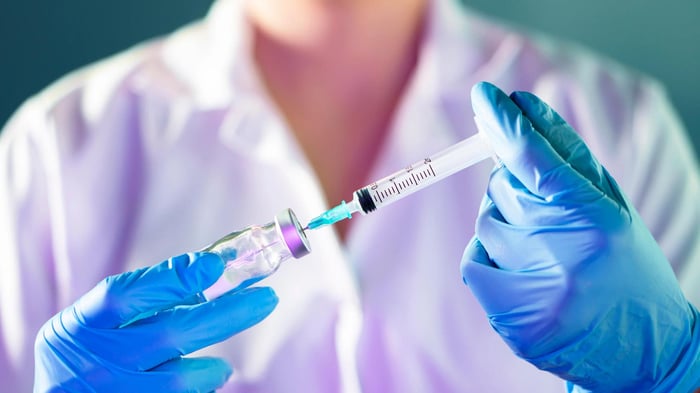 Moderna's numbers reflect its vaccine success. Revenue soared to $1.94 billion in the first quarter, up from just $8 million in the year-ago period. Moderna posted net income of $1.22 billion, which worked out to $2.84 in earnings per share, its first quarterly profit ever.

Yet Moderna also had positive things to say about its future. A study of booster doses in previously vaccinated clinical trial participants showed promising signs in fighting COVID-19 variants, while a study for the vaccine in patients 12 to 17 featured strong efficacy of 96% with no serious safety concerns. Moderna increased its production projections to between 800 million and 1 billion doses in 2021, with the hope of rising to 3 billion doses by 2022.

The federal government could potentially have an impact on future earnings, though, with its support for patent protection waivers internationally. The move, which responds to calls from India and South Africa to allow for generic vaccine production, marks a big shift from past bipartisan support of intellectual property protections. Opponents point out that waivers by themselves wouldn't lead to immediate generic production and would introduce concerns about quality control.

It's unclear whether patent protection will get removed or whether the threat will be enough to lead Moderna and other vaccine producers to license production globally at lower costs than they might otherwise do. The uncertainty, though, is hitting shareholders hard, and it could keep a lid on Moderna's growth until it gets resolved.

Uber's slump came despite gross bookings hitting an all-time high, rising 24% from year-ago levels. The company's mobility division, which includes its ride-hailing service, saw a huge revenue decline of 41% year over year even after adjusting for a one-time accounting item. However, the delivery business saw revenue more than triple over the same time frame. There were some signs of recovery, with trips falling just 13% and the Asia-Pacific region showing a strong rebound. However, ongoing concerns about labor law issues seemed to dampen enthusiasm for the stock.

Meanwhile, Fastly's plunge stemmed from several factors. Quarterly results featured 35% revenue growth and expanded gross margin figures, but adjusted losses widened from year-ago levels. Despite its dollar-based net expansion rate of 139%, however, some concerns about slowing growth rates came into play. The departure of CFO Adriel Lares also raised some nervousness, but the bigger worry is that Fastly might see growth decelerate in the remainder of the year and beyond.

Investors were pleased when stocks soared on favorable growth last year, not questioning whether the size of the stock-price gains was warranted by the business growth rates. Now that stock prices are sometimes falling even with solid fundamentals for businesses, it's evident that investors see the bull market rally as having come too far, too quickly. That could cause short-term choppiness for a while.