Please ensure Javascript is enabled for purposes of website accessibility
Log In Help Join The Motley Fool
Free Article Join Over 1 Million Premium Members And Get More In-Depth Stock Guidance and Research
By Keith Speights - May 7, 2021 at 6:01AM

You'll even have money to spare after buying these three great stocks.

You really can't make a strong argument against the old adage that it takes money to make money. Even if you use a no-commission trading platform like Robinhood and buy relatively inexpensive stocks, you'll need some upfront money to invest.

However, you don't necessarily have to have a lot of money. There are plenty of great stocks you can scoop up with only a few hundred dollars in your account. The possibilities include several of the stocks that rank among the 100 most popular on Robinhood.

But which stocks should you consider? Here are my picks for the three best Robinhood stocks to buy with $300 right now. 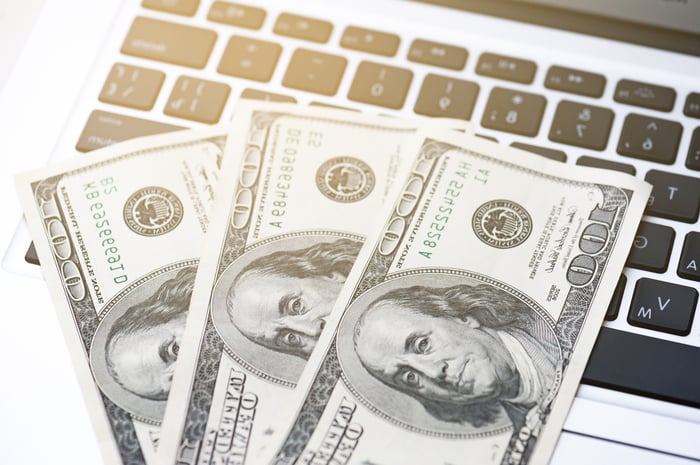 I'd start off by buying the ARK Innovation ETF (ARKK -1.10%). Yes, it's actually an exchange-traded fund (ETF) and not a stock. ARKK trades like a stock, though, and it's one of four ETFs that rank in the Robinhood top 100.

You'll have to use a little over one-third of your $300 to buy ARKK at its current price, but you'll get a lot with that investment. The ETF owns 58 stocks that are innovative disruptors, at least in ARK Invest CEO Cathie Wood's view.

My view is that many of the stocks held by ARKK should be big winners over the long term and help propel the ETF much higher. I especially like the prospects for Teladoc Health and Square, both of which are in ARKK's top 10 holdings.

ARKK is roughly 30% off its peak from earlier this year. I wouldn't worry too much about this decline, though. The pullback allows investors to buy this top ETF at a discount.

You've no doubt heard of the FAANG stocks. Most of these giant tech stocks are too expensive to buy with only $300. However, Apple (AAPL -0.23%) is the lone exception, with its share price currently hovering close to $130.

Apple ranks as the No. 2 most popular stock on Robinhood, and that makes a lot of sense. After all, Apple is the biggest company in the world based on market cap. Its products are used by hundreds of millions of people.

But Apple's popularity and size aren't reasons to buy the stock -- the company's growth prospects are. Apple's iPhone juggernaut continues to roll, fueled by the rise of high-speed 5G networks. I don't look for that to change, especially considering that a foldable iPhone is likely on the way in 2023. You can pretty much bet that it will be a massive commercial success.

The company continues to find new ways to expand its iPhone-based ecosystem. Apple recently launched AirTag, a product that allows you to easily keep track of your stuff. I also expect that augmented reality and virtual reality will provide great growth opportunities over the next few years.

After buying ARKK and Apple, you'll have roughly $70 left of your initial $300. That rules out many of the best stocks on the Robinhood top 100 list. However, you could still buy Pfizer (PFE -1.40%) and have money to spare.

Pfizer stands out as one of the most underappreciated stocks on the market right now, in my view. The big drugmaker just reported a blowout first quarter. Revenue soared 42% year over year to $14.6 billion. Pfizer's earnings trounced analysts' estimates. The company even raised its full-year revenue guidance by more than $10 billion.

But many investors seem to think that Pfizer's huge COVID-19 vaccine sales will only be temporary. However, the company is becoming increasingly confident that annual vaccinations will be required. That means Pfizer could be able to count on strong recurring revenue from its COVID-19 vaccine for years to come.

Pfizer's prospects don't hinge entirely on the one vaccine, though. The company expects to generate at least 6% revenue growth and double-digit earnings growth through 2025, excluding the impact of its COVID-19 vaccine. Pfizer also pays a dividend that yields nearly 4%. Your initial investment will automatically make you more money every quarter, thanks to this juicy dividend.