Please ensure Javascript is enabled for purposes of website accessibility
Log In Help Join The Motley Fool
Free Article Join Over 1 Million Premium Members And Get More In-Depth Stock Guidance and Research
By Rich Smith - Updated May 10, 2021 at 3:08PM

DOGE-1 mission to the moon may not be as big a deal as you think.

"I'm excited for my Mother's Day gift. I just hope it's not Dogecoin," quipped Elon Musk's mother Maye Musk Saturday in the intro to the SpaceX CEO's first-ever hosting of Saturday Night Live. Later in the show, Musk admitted on "Weekend Update" that Dogecoin is "a hustle" -- and this morning, the dog-faced cryptocurrency that began as an internet joke is in the red.

Not to worry, Doge-investors. The very next day after that segment aired, SpaceX announced it will launch a "DOGE-1 Mission to the Moon." 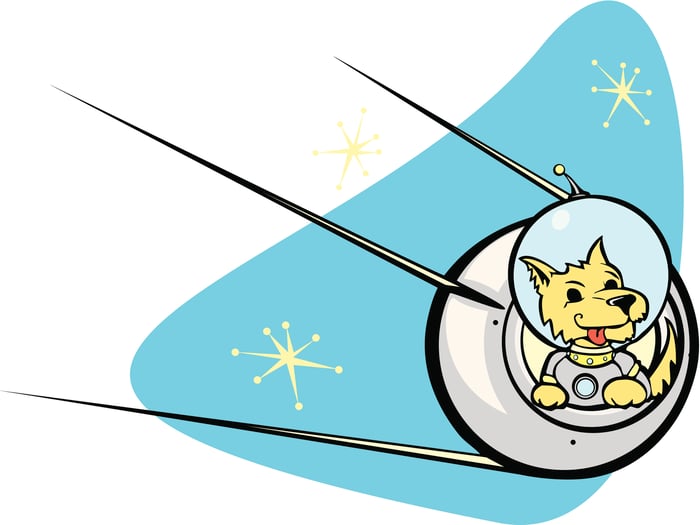 As the company confirmed, Canada's Geometric Energy Corporation, "an intellectual property, manufacturing and logistics firm originally founded on inventing renewable energy technologies," will be allowed to use Dogecoin to pay for the launch of a 40 kilogram (88 pound) cube satellite aboard a SpaceX rocket. The price of this launch wasn't stated, but assuming DOGE-1 will launch as part of SpaceX's now well-established rideshare program, it probably won't be a lot -- no more than $1 million. And despite the advertising tag line, the rocket also won't actually fly "to the moon" but just to low Earth orbit.

But that's not really the point. The point is that Elon Musk, and SpaceX, appear to be validating use of Dogecoin as actual money (and salvaging the value of Dogecoin in the process).

I don't know whether to laugh or cry about the project. But Wall Street seems to have no doubts. Responding to the news last night, GLJ Research founder Gordon Johnson quickly tweeted his reaction:

The company that @SpaceX just contracted with for the moon launch next year, funded by Dogecoin, has 11 employees and does $1.75mn/yr in revenues. Here's their website. Oh... and this is one of Geometric Energy's 11 employees. https://t.co/6GUL2EgcI6 pic.twitter.com/mtFkaLODiY

In short, GLJ thinks Geometric Energy is a joke. And so is Dogecoin.