Please ensure Javascript is enabled for purposes of website accessibility
Log In Help Join The Motley Fool
Free Article Join Over 1 Million Premium Members And Get More In-Depth Stock Guidance and Research
By Keith Speights - May 11, 2021 at 10:12AM

Nano-X Imaging (NNOX 8.98%) (or Nanox) has emerged as a perhaps unlikely Wall Street darling. Analysts have become increasingly bullish about the medical imaging technology company over the last few months. However, that optimism has now taken a major hit.

The company announced its first-quarter results before the market opened on Tuesday, and the healthcare stock plunged nearly 21% in pre-market trading. Here's the surprise in Nanox's first-quarter update that caused its shares to crash. 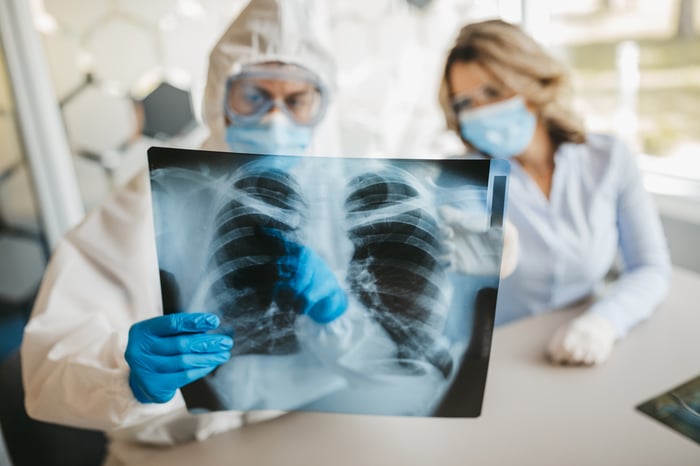 Nanox received Food and Drug Administration clearance for its single-source Nanox Cart X-Ray System in April. It viewed this achievement as a key milestone on its path to win a more important FDA clearance for its multisource device, which is the system that Nanox hopes to broadly commercialize.

The company previously announced that it expected to ship 1,000 multisource units by the first quarter of 2022. Nanox predicted that it would deliver 15,000 systems by the end of 2024. While the latter goal is still a possibility, the former isn't.

Nanox stated in its first-quarter update that it doesn't expect to be able to ship 1,000 multisource units within its original timeline. The company said that it has experienced delays with its third-party supplier of the high-power ceramic tube that's a core component of its innovative X-ray devices. These delays were worsened by the pandemic.

Because of these issues, Nanox is now working with two alternative suppliers. The company is still optimistic that it will be able to ship 1,000 multisource units during 2022 and possibly more. Achieving this goal is still contingent on receiving FDA clearance and similar authorizations from other countries' regulatory agencies for the multisource device.

The rest of Nanox's Q1 news

This unexpected delay was probably all that most investors focused on with Nanox's update. However, the company did have other news, starting with its financial results.

Nanox ended the first quarter with cash and cash equivalents totaling $219.3 million. This reflected a small increase from the company's cash stockpile of $213.5 million as of Dec. 31, 2020.

CEO Ran Poliakine also said that Nanox is "making solid progress" on transferring technology to its Korean subsidiary to produce the silicon MEMs chip that is key to its X-ray devices. A new factory is also being built.

The most crucial milestone for Nanox is its submission of a 510(k) pre-market notification to the FDA for its multisource device. Poliakine said that the company remains on track to file this submission in 2021.