Please ensure Javascript is enabled for purposes of website accessibility
Log In Help Join The Motley Fool
Free Article Join Over 1 Million Premium Members And Get More In-Depth Stock Guidance and Research
By Lee Samaha - May 17, 2021 at 9:48AM

A heavy equipment company and a miner look set to flourish in the current environment.

Given that the market has been stressed recently with fears over rising raw material prices stoking inflation and possibly higher interest rates, it makes sense to start looking at some companies that might benefit from these conditions. Two names that spring to mind are Caterpillar (CAT 1.46%) and copper miner Freeport-McMoRan (FCX -0.16%). Sometimes the charts don't lie, and Caterpillar and Freeport are up 5% and 24%, respectively, in the last month while the S&P 500 is down almost 1%. Here's why both could continue to be big winners in 2021.

It might seem strange to designate highly cyclical stocks like Caterpillar and Freeport as winners from a market sell-off. Still, all cycles are different, and investors need to adjust their playbooks when facing other opposition.

The case for Caterpillar rests on the idea that the global economy will continue its cyclical recovery but will have to adjust to higher raw material prices. The company is well known for its construction and infrastructure equipment. However,  Caterpillar is also a significant player in the energy (oil) and resources (mining and aggregates) equipment sector. A robust long-term recovery in those industries will lead to a substantive increase in the company's profitability. 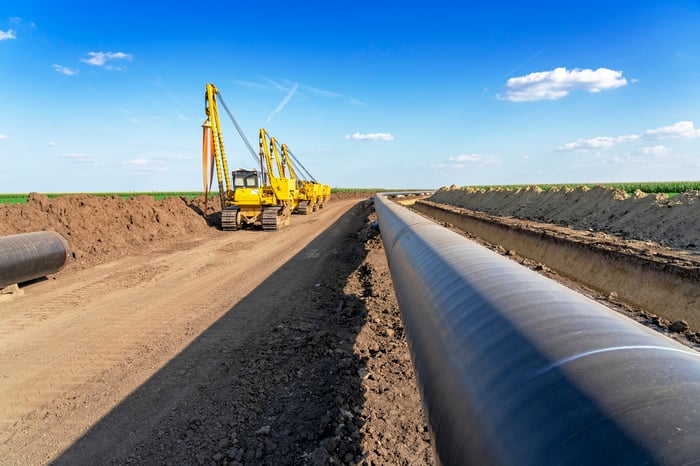 The case for Freeport is far more straightforward. Demand for copper is rising due to economic recovery and long-term growth in renewable energy and electric vehicles (both imply significantly increased demand for copper). So the price of copper will face upward pressure.

Why the current environment is favorable for both stocks

These might be the most famous last words of any investor, but here goes anyway. Probably the best way to monitor the commodity cycle at large is by following a broad-based commodity index like the Thomson Reuters/CoreCommodity CRB Index. As you can see below, commodity prices tend to rise after recessions. This stands to reason as supply is curtailed in line with declining demand levels going into a recession and then has to play catch-up as the demand surges coming out of a recession.

However, there are a couple of crucial differences between the current recession and the previous one. Leading into the last recession there had been a multi-year increase in commodity prices (largely driven by demand from surging growth in China). While going into the current recession, there had been a multi-year drift downwards in prices. The key difference is that the former induces increased investment in supply, while the latter does the opposite.

There are high hopes that the mining industry in particular is set for a multi-year period of capital spending increases. 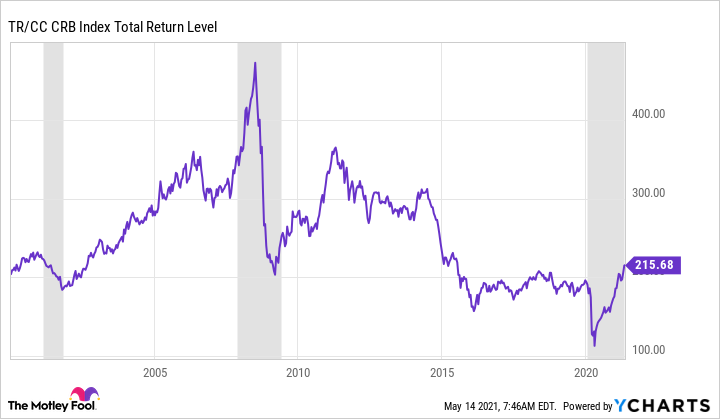 That's a theme reflected in Caterpillar CEO Jim Umpleby's commentary on the recent earnings call, when he spoke of "copper, iron, iron ore, gold" prices as being "very strong" and "having very positive conversations with our mining customers" with "a number of projects that we're tendering that are multi-year in nature." Umpleby sees a gradual improvement taking place rather than a spike. 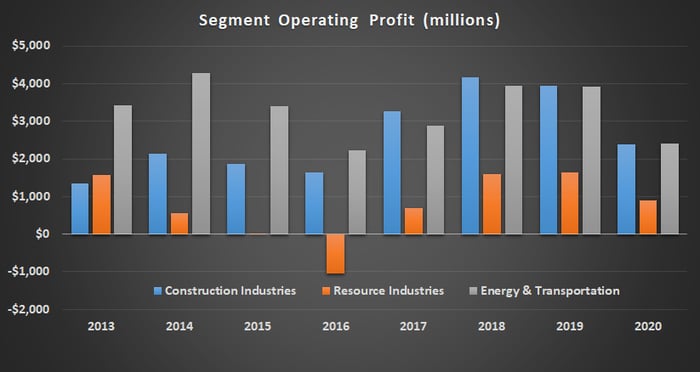 The second difference was highlighted by Freeport CEO Richard Adkerson on his company's recent earnings call. Adkerson spoke of previous commodity cycles being aligned with the economy, and then the post-2000 era emerged where China's surging growth dominated demand trends. 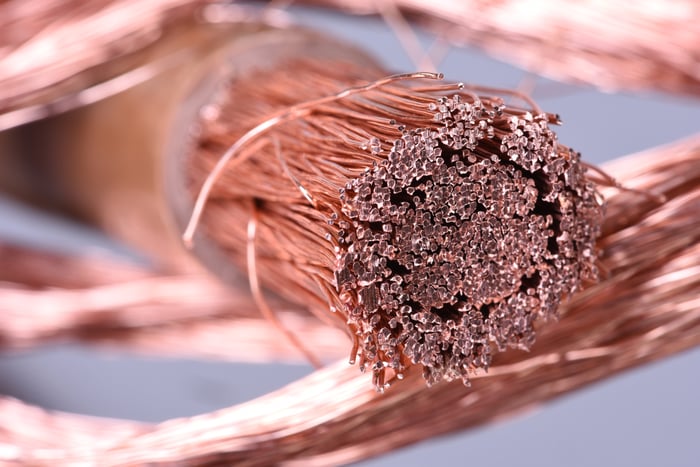 However, the current demand trend for copper in particular is driven by a combination of demand growth from China (albeit at a slower pace), global growth driven by rising living standards in the developing world, and demand from the energy transition. As noted earlier, electric vehicles require a lot more copper wiring, and renewable energy requires copper for transmission and storage. That's great news for Freeport and also for Caterpillar -- Umpleby is also bullish on Caterpillar's prospects to benefit from the growth of electric vehicles.

If the market is selling off because of fears of raw material prices rising and eating into profit margins, it makes sense to buy stocks with positive exposure to those self-same raw materials. In addition, there's evidence to suggest the increase in commodity prices and investment could last over a multi-year timeframe.