Please ensure Javascript is enabled for purposes of website accessibility
Log In Help Join The Motley Fool
Free Article Join Over 1 Million Premium Members And Get More In-Depth Stock Guidance and Research
By Anthony Di Pizio - Updated May 19, 2021 at 12:55PM

Ethereum is up big, but volatility has returned to the crypto markets. That might spell opportunity for the bulls.

It's impossible to navigate the investing world these days without coming across cryptocurrency in some way. It's everywhere -- on your trading platform, on your social media feeds, and even your favorite cable financial news channel. Arguably the second-most-discussed digital asset is Ethereum (ETH -1.79%), which has grabbed headlines recently for its performance compared to Bitcoin, its gorilla-sized big brother.

It's up roughly 24% in the past month alone, whereas Bitcoin is down about 29% over the same period. Ethereum is well off its highs, though, so let's see if now is the time to make an investment. 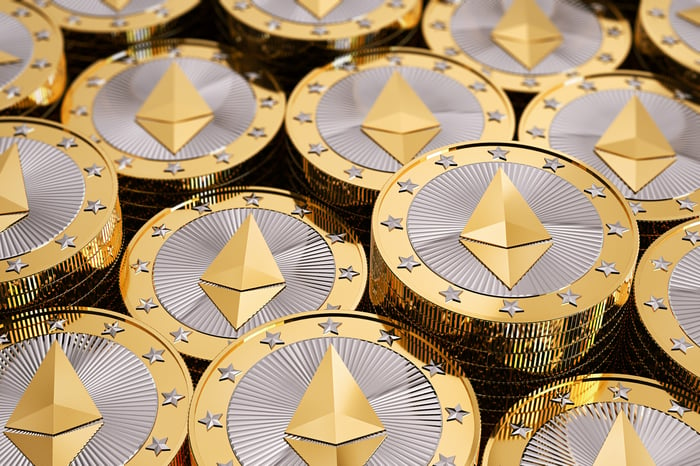 While most cryptocurrencies are known to function exactly as described -- as currencies -- Ethereum is a little different. It's a large platform ecosystem hosting an almost alternative economy, filled with different digital functions redesigning the way we do business. Its community of programmers are constantly developing new uses for the underlying technology, with a growing number of businesses using it as a foundation.

Take non-fungible tokens (NFTs), for example. This is another term making the rounds right now, made famous by a recent digital artwork sale of $69 million. It was paid for in Ether -- the legacy cryptocurrency powering the Ethereum platform -- of course. A buyer in Singapore made the transaction through auction giant Christie's, which helped this new world get endless mainstream media attention.

The Ethereum platform has made technologies like NFTs possible, as its blockchain (the ledger tracking all transactions) has improved materially over Bitcoin's, introducing new functions. The "smart contract" capability on Ethereum allows the owners of valuable intellectual property -- like music or art, for example -- to directly sell their work and earn royalties on each further sale from there on. This digital concept has the power to stifle some of the big headwinds that have hurt the creative industries for decades, including piracy and theft.

The regular, major swings in value for cryptocurrencies are a hurdle to wider adoption. Some investors consider crypto as a store of value, like gold, but others genuinely view them as a replacement for real money. The problem with both uses is that consumers are unlikely to hold an asset that so rapidly changes in value -- both up and down.

It's also making it hard for professional investors to see the investment thesis. In a recent Bank of America survey, 74% of the 200 respondents said Bitcoin was a bubble, and voted it the second-most crowded trade behind technology stocks. It's a possible hint that all of the people who want to own these assets already do, and therefore prices might start to fall. The survey seems small, but those 200 respondents manage over $500 billion in assets. If you consider Ethereum to be in the same league as Bitcoin, perhaps this doesn't bode well.

It's possible that volatility cools off as crypto becomes more accepted, and it's clear Ethereum is here to stay. There are now multiple online art marketplaces that allow users to exchange NFTs for different creative works, in addition to lending and investment services all driven by Ethereum.

Ethereum has a total market value of about $330 billion at Wednesday's prices, compared to $775 billion for Bitcoin. However, it's clear the former has more potential beyond just a vehicle for transactions and price appreciation. Even to date, while still in its infancy, the platform has delivered potentially game-changing advancements to solve problems across different industries, and it appears all that's left is adoption.

While Ethereum is up 24% over the last month, it's down about 34% from its highs, which could represent opportunity for those investors who believe in its future.

Bank of America is an advertising partner of The Ascent, a Motley Fool company. Anthony Di Pizio has no position in any of the stocks mentioned. The Motley Fool owns shares of and recommends Bitcoin. The Motley Fool has a disclosure policy.

Why You Should Be Paying Attention to Ethereum

Ethereum vs. Bitcoin: Which Is the Better Buy?

What's the Difference Between Bitcoin and Ethereum?

Are NFTs a Fad or Are They Here to Stay?