Please ensure Javascript is enabled for purposes of website accessibility
Log In Help Join The Motley Fool
Free Article Join Over 1 Million Premium Members And Get More In-Depth Stock Guidance and Research
By Alex Carchidi - May 19, 2021 at 5:23AM

It doesn't need to sell marijuana to make a profit.

If you want to grow marijuana indoors, it's essential to have plenty of gardening gear, such as fertilizers, grow lights, and hydroponic systems. Why is this relevant to investors, you might ask? Because the cannabis boom is just getting started, and one company in particular is already making a killing by selling the right products to the right customers.

Rather than selling cannabis directly to consumers, GrowGeneration (GRWG 5.69%) focuses on selling hydroponic cultivation equipment and plant nutrients to cannabis companies of all sizes. That means it stands to benefit hugely from the ongoing wave of marijuana legalization in the U.S., and that's exactly what makes it the best cannabis stock of the moment. 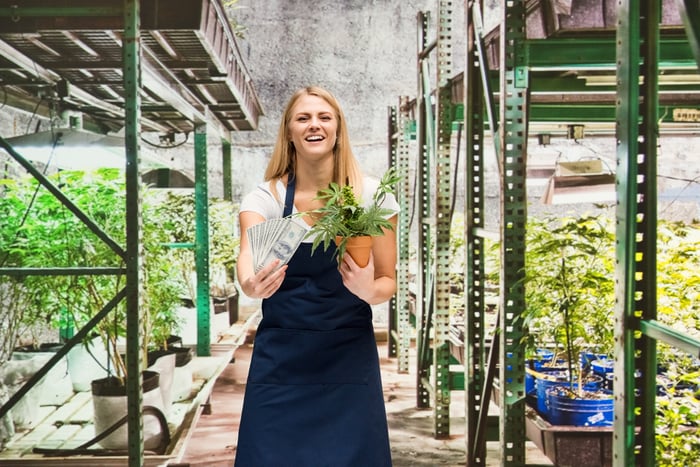 Fresh growth is coming over the next couple of years

GrowGeneration's regional positioning for the cannabis boom is unmatched. By 2023, it'll have 100 retail locations in the U.S., which is nearly double its present total of 52. Its existing stores are concentrated in the hottest cannabis markets, including California, Colorado, Michigan, and Massachusetts. Critically, the company is also setting up new stores in states like Illinois, Pennsylvania, and New York, where recent advancements in legalization will soon give way to burgeoning new cannabis businesses that are hungry for growing gear.

Importantly, each new cannabis grower can contribute to the company's revenue on an ongoing basis. First, customers purchase the environmental controls, grow lights, and hydroponic systems to set up their facilities. Then, these customers can contract with GrowGeneration as their supplier for fertilizers and growing media, which they need recurrently. About 60% of the company's revenue is derived from sales of consumables that are likely to be recurring, so each new customer is quite valuable in the long term.

Even in states that aren't dynamic cannabis markets, management expects that newly opened stores will have a payback period of roughly 1.5 years, which is quite short. Most recently, it leased a location in Mississippi with the hopes of capitalizing on the freshly legalized medicinal cannabis market there. That will support revenue growth down the road, not to mention providing a more immediate boost over the next few quarters.

GrowGeneration's latest earnings report was a bona fide sizzler. In the first quarter of 2021, its revenue exploded by 173% year over year to reach $90 million. Investors will also be pleased to hear that gross margins increased from 27.1% to 28.2%. That margin growth occurred amid a slew of acquisitions, which saw the company gobble up a total of four small hydroponics operators across the country as well as several other businesses. Because the company has little debt, these acquisitions aren't about to put the brakes on future expansion. 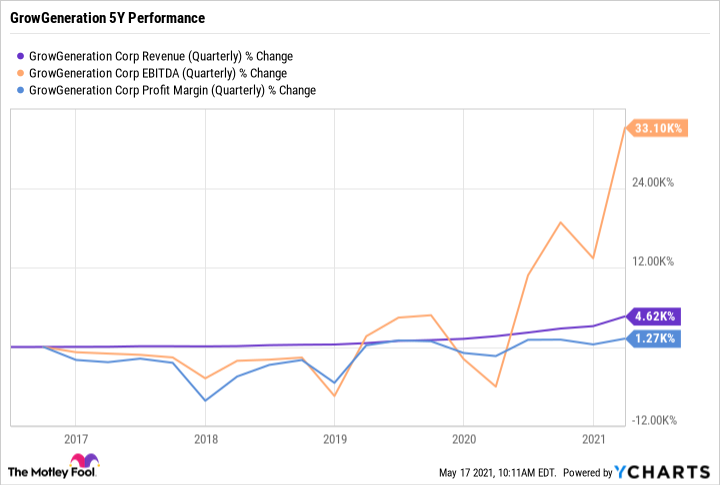 Management was so satisfied with the company's performance that it raised its financial guidance for 2021, estimating that GrowGeneration could make as much as $470 million in revenue and $58 million in adjusted earnings before interest, taxes, depreciation, and amortization (adjusted EBITDA).

While the market's reaction to the news was muted, continued performance like this will be hard to ignore in the future. Overall, GrowGeneration has the ingredients for ongoing robust growth. As long as the cannabis industry in the U.S. continues its upward ascent, it's hard to see how GrowGeneration wouldn't keep soaring right along with it.