Please ensure Javascript is enabled for purposes of website accessibility
Log In Help Join The Motley Fool
Free Article Join Over 1 Million Premium Members And Get More In-Depth Stock Guidance and Research
By Reuben Gregg Brewer - Updated May 20, 2021 at 11:14AM

This REIT takes the lowly strip mall and turns it into something more, and that's worth a premium price.

Real estate investment trust (REIT) Federal Realty (FRT) just bought a shopping center in Virginia. The property is 83% leased, but the Federal Realty says it has big plans for adding value to the asset, which is the core of its approach -- and the reason this landlord is one of the best shopping center REITs in the business. Here's a closer look at why I own this REIT.

Big numbers from small ones A key piece of the story here is that Federal Realty's portfolio is highly curated. It focuses on owning properties in and around major population centers that also tend to have high average incomes. The average population within three miles of a Federal Realty property is 170,000, with an average household income of $127,000. Its focus is on markets like New York City, Boston, Chicago, and Los Angeles. The Virginia shopping center it just acquired, for example, is near Washington, D.C. Although it is on the lookout for more markets, it is currently focused on just eight major metropolitan regions, where it believes it can grow by adding value to its properties.

That's not a throwaway concept here, because this real estate investment trust puts a lot of effort into making sure its properties remain leaders in the regions it serves (or, in the case of newly acquired assets, turn into leaders). In fact, during 2020, when the pandemic was hammering retailers, Federal Realty was fielding calls from companies looking to relocate into its properties from nearby locations. Effectively, they wanted to upgrade into a Federal Realty property. As the saying goes in real estate: location, location, location.

But there's a lot that goes into that for Federal Realty. The 83% leased Virginia asset the REIT just acquired, for example, is likely to get upgrades that make it more desirable, helping to increase the occupancy and rent levels, and growing the property's value over time. It's not just about being in the right place; it's also about managing properties for peak performance.

Federal Realty's success in managing its portfolio is impressive. In the first quarter, it generated $217 million in rent from 101 properties, or roughly $2.2 million per property. Kimco, one of the industry's biggest names, generated $279 million in rent from about 400 properties in the first quarter, or around $700,000 per property. That's a huge difference, and it helps to explain why Federal Realty's market cap sits at the top end of the peer group despite its relatively modest portfolio size.

But in that back-of-the-envelope analysis lies a problem for investors -- this disparity hasn't gone unnoticed on Wall Street. In fact, Federal Realty is rarely cheap. Its dividend yield at Thursday's prices is around 3.75%. That's toward the high end of the yield range over the past decade, but still down materially from the roughly 6% yield seen during 2020 and in the 2007 to 2009 recession. The current yield, meanwhile, is in line with peers, but not exactly what I would call a great price point. Value-conscious investors probably wouldn't be interested right now. 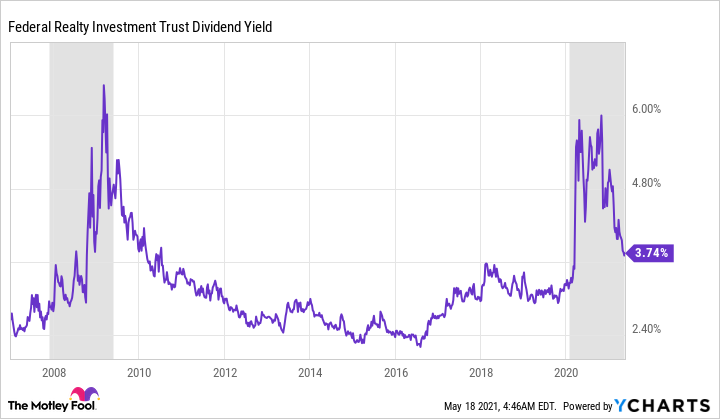 Luckily, I jumped on Federal Realty during the 2020 downturn. I'm also happy to let the returns compound by dividend reinvesting. However, I definitely wouldn't be as excited to buy the REIT today as I was when I acquired it. I think it's probably fully valued, or maybe even a little pricey (at least for my taste). Given its five-decade-plus history of annual dividend increases, however, conservative dividend investors might still be OK with the risk/reward trade-off here at today's prices if dividend reliability is of prime importance.

Pay up or wait?

Federal Realty is a top-notch player in the shopping center space and worth a deep dive for any investor, even if it just provides a comparison point for other landlords you are looking at. Indeed, you might realize that paying a cheap price for a middling REIT isn't what you really want. That said, conservative income investors willing to pay full fare for quality will probably still find Federal Realty attractive even at today's valuations.

And for those who think it's a bit too dear right now, well, the mercurial market may eventually open up another buying opportunity -- so maybe put Federal Realty on the wish list so you are prepared for the next downdraft. If you own, it I wouldn't suggest selling it even if you have notable unrealized gains, because extremely well-run companies are worth holding onto.