Please ensure Javascript is enabled for purposes of website accessibility
Log In Help Join The Motley Fool
Free Article Join Over 1 Million Premium Members And Get More In-Depth Stock Guidance and Research
By Dan Caplinger - Updated May 20, 2021 at 1:38PM

Growth is back, and these innovators are on the rise.

The stock market got some relief on Thursday morning, and that helped the Nasdaq Composite (^IXIC -0.43%) recover some of the ground that it has lost in recent days. As of 12:30 p.m. EDT today, the Nasdaq was up more than 1.5%, with many hoping that the rebound could be the beginning of a new push toward all-time highs for the index.

Technology stocks in areas like cloud computing and e-commerce have gotten a huge amount of attention, especially those that trade on the Nasdaq. However, many investors have neglected the rise of the fintech industry, as companies like Upstart Holdings (UPST 10.59%) and Affirm Holdings (AFRM 5.75%) take innovation and try to disrupt a staid and old-fashioned financial industry. Below, we'll look at what's helping push Upstart and Affirm higher today and what it means for fintech in general.

Upstart gets a boost

Shares of Upstart Holdings were up more than 5% on Thursday morning. The credit-information provider has seen several encouraging things happen in recent days that have raised awareness of its stock.

First of all, Upstart said Wednesday that it had expanded its partnership with banking institution Customers Bancorp (CUBI 1.07%), with Customers extending the Upstart artificial-intelligence powered lending platform's capabilities to more of its prospective borrowers. The bank explained that using the Upstart model had improved its returns, default rates, and fraud risk compared to using traditional lending metrics and practices. Moreover, the bank's borrowers have gotten a better experience from using the platform, enhancing its own reputation in the banking industry. 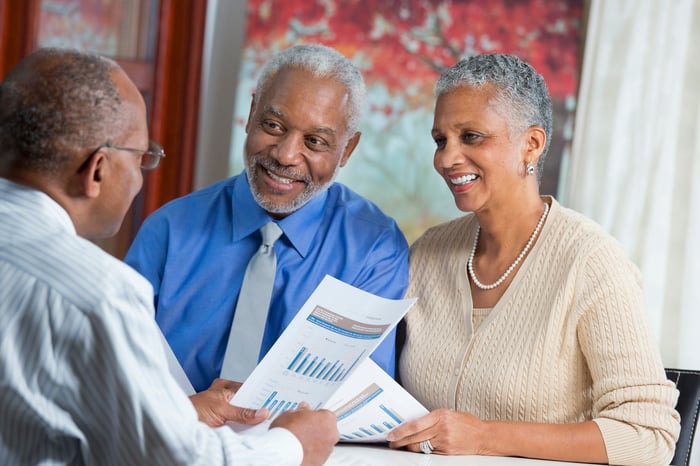 In addition, Upstart is seeing some high-profile investors take an interest in the company. Billionaire investor Dan Loeb's Third Point added to its stake in Upstart in early 2021, reporting that the stock now represents the fund's largest holding. At around 13.3 million shares, Loeb's position was worth more than $1.8 billion, working out to a stake of between 15% and 20% of Upstart's total outstanding shares.

Upstart is starting to gain traction in the banking community. If that trend continues and Upstart gets a more diverse set of customers, then the gains it has seen lately could be just the beginning of a long-term boom for the AI-powered lending platform provider.

Affirm gets a lift

Elsewhere, shares of Affirm Holdings climbed more than 4% today. Investors appear to be taking a second look at recent results that got a negative reception coming out of the gate.

Affirm's quarterly results from earlier this week were generally solid. Fiscal third-quarter results included an 83% rise in gross merchandise value and a 60% boost in the number of active consumers using the "buy now, pay later" service to 5.4 million. Affirm more than doubled the number of merchants offering the service to their customers, with almost 12,000 stores letting buyers spread out their payments.

Particularly encouraging was how Affirm is starting to see benefits from its partnership with e-commerce platform provider Shopify (SHOP -0.98%). In recent weeks, Affirm has scaled up its onboarding of Shopify merchants. That could dramatically accelerate Affirm's growth for the remainder of the year and even beyond.

Some investors have been nervous about Affirm's heavy reliance on customers of connected fitness company Peloton Interactive (PTON 1.18%), especially given Peloton's recent recall of its treadmill products. Yet as Affirm gets more customers, it stands to benefit if and when it finds ways to turn growing revenue into profitable business over the long run.