Please ensure Javascript is enabled for purposes of website accessibility
Log In Help Join The Motley Fool
Free Article Join Over 1 Million Premium Members And Get More In-Depth Stock Guidance and Research
By David Jagielski - May 25, 2021 at 6:20AM

Low payout ratios and tons of cash make these stocks solid income investments that you can buy and forget about.

AT&T (T 0.00%) gave income investors an unwelcome surprise last week when the company announced it was ditching WarnerMedia and would be "re-sizing" its dividend after the spinoff. It's an important reminder for investors of just how quickly and without warning dividend policies can change. With a smaller business moving forward and different growth prospects, AT&T investors will undoubtedly lose a good chunk of the recurring income they were previously accustomed to.

One way to minimize the risk of a company slashing its payouts is by investing in businesses that are generating ample free cash flow to support their dividend payments and that aren't struggling to stay out of the red (AT&T incurred net losses of $2.2 billion over the past four quarters). And although their yields may not be nearly as high as AT&T's, three much safer income stocks to invest in are Becton, Dickinson (BDX 0.31%), Target (TGT -3.47%), and Apple (AAPL -1.51%). 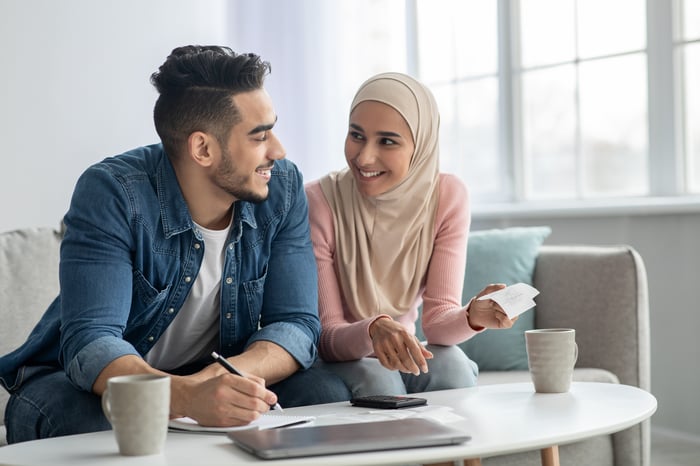 Becton, Dickinson (BD) doesn't pay a huge dividend, but at 1.3%, its yield is in line with what you can expect from an average stock on the S&P 500. But BD is more than your average dividend stock -- it is on track to becoming a Dividend King this year, as it has hiked its payouts for 49 years in a row.

Over the trailing 12 months, the company has generated free cash flow of $4.2 billion, which is four times the $1 billion it paid out in dividends during that time. Its payout ratio (which takes net income into account) sits at around 60% and confirms that BD's financials look rock-solid enough to support its dividend payments.

The healthcare company has gotten a boost in revenue from its COVID-19 testing products, reporting 79% year-over-year sales growth in its integrated diagnostic solutions segment for the six-month period ending March 31. BD is seeing positive growth in every area of its business except surgery, which should pick up as hospitals resume regular procedures now that COVID-19 case numbers are falling.

With some good growth and plenty of cash to support its dividend plus an impressive streak going, BD is a much safer income stock to hold than AT&T as it's extremely unlikely to cut or stop its payouts anytime soon.

Target is likely to reach the status of Dividend King even sooner than BD. The retailer last hiked its payouts in June 2020, so it may only be a matter of weeks before this stock joins that exclusive club.

And while Target has also benefited from pandemic-driven buying, its business hasn't been slowing down. The company released its first-quarter earnings last week for the period ending May 1 and its comparable sales were up by 23%. Its free cash of $611 million left plenty of room for the company to cover its dividend payments of $340 million during the period. And per-share profits of $4.17 were more than six times its quarterly payout of $0.68.

Even if there is a drop in revenue this year, Target is still in a stellar position to continue to not just pay but increase its dividend in the future. Unlike AT&T, the company doesn't have an expensive streaming service like HBO Max that could thwart its dividend plans. Although its yield of 1.2% is a bit low, that will likely become larger in the years to come, as it's unlikely that Target will stop raising its payouts in the foreseeable future.

Apple's yield of 0.65% is the lowest on this list. However, the tech giant's payouts are incredibly stable. And investors will likely profit from the stock's gains over the long term by investing in what billionaire investor Warren Buffett calls "the best business I know in the world."

With revenue of more than $325 billion over the past year, the company's top line is higher than what many countries report in GDP. And during that time, its free cash totaled more than $90 billion -- more than six times its dividend payments of $14 billion. It has a minuscule payout ratio of just 19%. The company had so much cash that it repurchased $76 billion worth of shares. So if you're not making a whole lot of money from the dividend, you could more than make up for that through the stock's rising value; in 12 months, the stock has soared 60% and has outperformed the S&P 500, which is up 42% during the same time frame.

Although the company is nowhere near being a Dividend King (Apple has only been raising its dividend payments since 2013), this is a stock that looks to be an ultra-safe bet to continue making rate hikes in the future. Although it does have its Apple+ streaming service that it can invest in, with the plethora of cash that it is generating, the company has more than enough money to go around. Income investors won't need to worry about the safety of their dividend payments.