Please ensure Javascript is enabled for purposes of website accessibility
Log In Help Join The Motley Fool
Free Article Join Over 1 Million Premium Members And Get More In-Depth Stock Guidance and Research
By Will Healy - May 25, 2021 at 8:45AM

However, one can easily overlook how both have evolved into high-yield dividend stocks that pay well above the average S&P 500 cash return of 1.4%. Also, given the condition of each business, the current performance of the stock market will likely not affect these payouts.

Because it's not a consumer-based tech company, Broadcom may not be as familiar as other tech giants. However, it continues to develop products that bolster the industry. 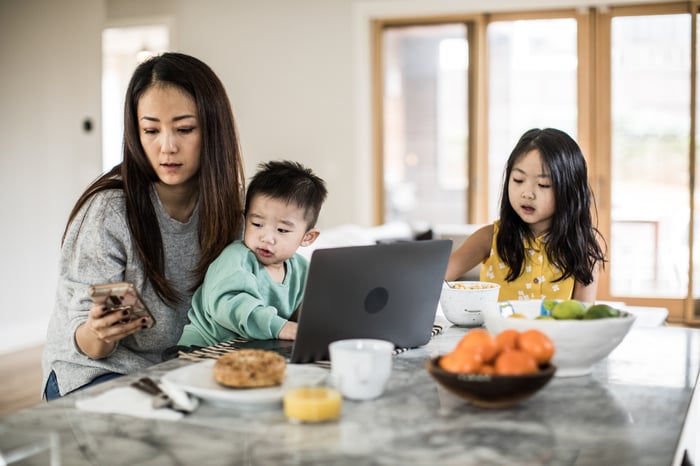 Dividend investors benefit from its $14.40-per-share annual payout. It delivers a cash yield of about 3.3%, and the payout has increased at least once per year since its introduction in 2010.

Given the strengths of Broadcom's business, the payout hikes will probably continue. Broadcom derives its revenue from two main divisions: semiconductor solutions and infrastructure software. In 2020 alone, Broadcom spent about $5 billion in research and development, a 6% increase from the previous year.

That investment helps Broadcom deliver solutions in areas such as data centers, broadband, and server storage. However, the current cash cow is the next-generation Wi-Fi 6E solution, a chip delivering faster speeds and lower latency. Such technology has helped the company ink multi-billion-dollar supply deals with Apple and Samsung.

These successes allowed Broadcom to generate about $11.6 billion in free cash flow in fiscal 2020, a 25% increase over 2019 levels. Also, the $3 billion in cash flow in Q1 2021 represented a rate of increase of 36% versus the year-ago quarter. With about $570 million going to interest and over $1.5 billion of this cash allocated to dividend payments in Q1 2021, Broadcom should not have issues with maintaining and increasing the payout.

Still, Broadcom faces some fiscal challenges. Its total debt of about $41.9 billion seems concerning for a company with a book value of $24 billion. Moreover, the valuation of around 50 times earnings comes in much higher than its P/E ratio of nine three years ago, making it seem a bit pricy in a falling market.

Nonetheless, with its competitive advantages and rising cash flows, Broadcom should continue to deliver cash for investors regardless of the stock market's current direction.

At first glance, Verizon does not look like a potentially lucrative play. The company has long struggled to sustain revenue and net income increases. Additionally, in the latest quarter, the company revealed that debt surged by more than $29 billion compared with one year ago as the company invested heavily in licensing spectrum.

Nonetheless, market conditions continue to work in favor of both Verizon and its dividend. The news that competitor AT&T (T 1.27%) will slash its dividend probably means that Verizon's 4.4% cash yield will now exceed AT&T's payout return.

Verizon's $2.51-per-share annual payout has risen every year since 2007, and management has signaled that those increases will continue. Verizon can sustain that pace. The $5.2 billion in free cash flow during the previous quarter helped Verizon cover $1.1 billion in interest payments and $2.6 billion in dividend payments.

Moreover, after initially buying AOL and Yahoo!, Verizon quickly realized that following AT&T into large media acquisitions would not work well. Hence, it has now decided to spin off Verizon Media.

Additionally, it did not invest as much in these losing ventures. This means it could buy $45 billion worth of licensed spectrum at the recent auction, almost double what AT&T spent. This spectrum will allow it to boost the quality of its coverage above its 5G nationwide offering.

Such coverage will also become critical as it evolves into more of a network-as-a-service business. As CEO Hans Vestberg mentioned on the Q1 2021 conference call, the business creates a new stream of income as Verizon can more directly support Amazon's edge computing or Honda's driverless cars.

Furthermore, income investors benefit from the fact that Verizon only trades for about 12 times earnings. This comes in well under T-Mobile US's 55 multiple (AT&T does not have a P/E ratio at the moment).

Verizon faces challenges. The spectrum purchase took its current debt level to almost $159 billion, a $30 billion increase in one quarter. Still, Verizon can cover the interest and dividend obligations. Moreover, with it achieving a notable victory over AT&T and spending heavily to foster its network-as-a-service business, income investors should prosper with this stock in most any market environment.