Please ensure Javascript is enabled for purposes of website accessibility
Log In Help Join The Motley Fool
Free Article Join Over 1 Million Premium Members And Get More In-Depth Stock Guidance and Research
By Courtney Carlsen - Updated May 25, 2021 at 12:11PM

The company is steadily growing and taking market share from competitors.

You're probably familiar with one or more of the many retail trading platforms, like E*Trade and Robinhood. But the professionals need more powerful tools, and more of them are turning to Tradeweb Markets (TW -2.28%) as their trusted trading platform.

Tradeweb caters to institutional investors who trade bonds and stocks at huge volumes, and its increasing market share shows that it's becoming the preferred trading platform. However, the company flies under the radar because its business just doesn't have the name recognition.

On the surface, Tradeweb underperformed the S&P 500 index in the past year, returning 28.3% versus the 40.2% return in the broader market. This largely reflects the outsized move higher in the company's stock price following the volatile trading month of March, which cooled down in the months that followed. However its stock has picked up since then, with Tradeweb up 51.5% compared to the S&P 500's 29.4% return since August 2021. And since its IPO in April 2019, Tradeweb has crushed it, returning investors 126.7% compared to the S&P 500's 46.4%. Here's why you should be paying attention to Tradeweb. 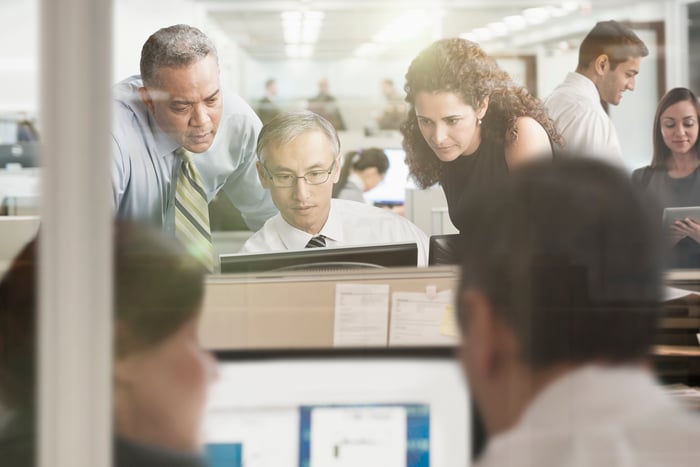 Tradeweb provides electronic trading to institutional customers such as hedge funds, insurance companies, and central banks, as well as wholesale traders such as market makers. When the company was founded, it sought to bring the trading process into the computer age and eliminate outdated telephone ordering. Since 1996, it's played an important role of modernizing trading with its electronic trading platform, starting with U.S. Treasuries.

Tradeweb has been crushing it. From 2004 to 2020, the company grew revenue at a compound annual rate of 12.5%. Very impressive, especially considering two recessions took place during this time. In the past four years, the company has grown revenue at 14.6% annually. This growth has continued in the first quarter of this year, when the company recorded total revenue of $273 million, an increase of 16.5% from last year.

How Tradeweb makes its millions

A majority of Tradeweb's revenue come in the form of transaction fees. In the first quarter, the company raked in $217.9 million in transaction fees, which were up 18.8% from last year. Subscription fees make up another $53 million in revenue, and were up 7.9% when compared to last year.

Tradeweb's platform allows for trading across different asset classes, but its interest rates and credit products -- like U.S. Treasuries, high-yield debt, and corporate bonds -- make up 80% of its revenue.

Its credit asset class saw volume drop 18%, to an average daily volume of $27 billion. This decrease was due to a 35% drop in derivatives product volume, but record volumes in U.S. and European corporate bond trading helped revenue in the credit asset grow 38%, to $74.3 million in the quarter.

What makes Tradeweb great is the role it plays in the interest rates and credit markets. The company has grown steadily over the years, and is perfectly positioned for the current market conditions. Given the increasing importance of the Federal Reserve coupled with huge fiscal stimulus, government bond issuance is at all-time highs and is driving record trading activity on the Tradeweb platform.

Even better news for Tradeweb is that it continues to take market share from its competitors, with Bloomberg being its primary competitor. In the first quarter, Tradeweb accounted for 15.3%, 19.4%, and 6.9% of the U.S. Treasuries, U.S. high-grade, and U.S. high-yield credit markets, respectively -- increases from its 12.5%, 15%, and 4.1% shares of those markets last year.

Olesky said that the company's electronic trading platform, which has innovated the trading process for institutional clients, deserves all the credit for the company's growth. The company prides itself on the speed of execution on its platform as one of its game-changing features, and its customers seem to agree as more migrate to the platform.

The continued growth of global bond and stock trading should serve as a tailwind for the company, and its impressive growth over the years makes Tradeweb deserving of more attention.

3 Reasons This Growth Stock Could Be a Monster