A tasty menu and expanded options without the wait is a recipe for success.

Whether it's a cookout with friends, a catered gathering, or a quick dash to a favorite restaurant, Americans are sure to be dining out more this summer as pandemic restrictions ease. Famous Dave's, from parent company BBQ Holdings (BBQ -0.12%), should benefit from some pent-up desire for a barbecue-style meal. But in certain Famous Dave's locations starting this summer, customers may be greeted by a slightly different service model.

BBQ Holdings -- a line of company-owned and franchisee-owned restaurants -- also owns Granite City Brewery, Clark Crew BBQ, and Chicago's Original Real Urban Barbecue. Much like other restaurant businesses during 2020, pandemic-related closings took a toll on the company's operations. In early 2020, Granite City Brewery was on the verge of filing for Chapter 11 bankruptcy protection. That's when BBQ Holdings stepped in to purchase 25 units of the business.

Back in early March, the first hints of movement within BBQ's go-forward strategy became public, suggesting a potentially big turnaround in business. The first-quarter financials released this month were strong enough that management even raised its outlook for the full year. 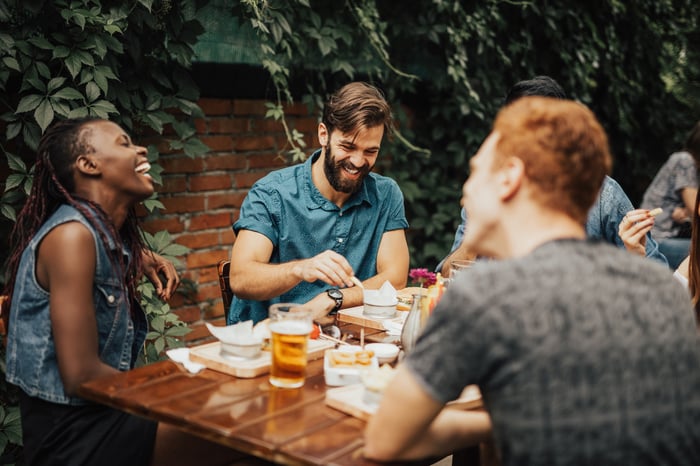 BBQ reported first-quarter 2021 earnings earlier this month. Adjusted EBITDA came in at $3.1 million, compared to a loss of about $400,000 in the first quarter of 2020, driven by both company-owned and franchise-operated Famous Dave restaurants, which celebrated 17.7% and 16% increases in same-store sales, respectively. Margin was also elevated, from a margin loss of 1.9% in 2020 to a positive margin of 9.1% so far this year.

By now, we all know that 2020 was not an ordinary year, and sales over the first four months were representative of the closures and (later) reduced capacities the pandemic created in 2020 and early 2021. It might be better to take a look at the first quarter of 2021 compared to the pre-pandemic Q1 of 2019. Famous Dave's saw nearly flat sales for January and February, followed by consistent increases of 9.5% for March and April.

One negative might be the Granite City sales when comparing 2019 to 2021. Those sales have decreased across each of the first four months of the year, though the trend is moving in the right direction, going from a decrease of 33% in January to a decrease of 19% in April. But before that becomes a sticking point for investors, it's worth a reminder that BBQ purchased Granite City's 25 units during early 2020 after Granite City filed for Chapter 11 bankruptcy protection. In looking back at the increase of 371% in sales at Granite City locations for April, it's not hard to find signs of life and a potential turnaround in full motion.

This past year the restaurant industry saw an uptick in delivery and carry out orders. That uptick often requires technology to support accuracy and efficiency. Since the pandemic, Famous Dave's is seeing 65% of its business coming from carry out. In order to keep up with demand, BBQ turned to Mobivity (MFON 0.00%) as its mobile messaging service for customer engagement and effectively adjusted its service model for customers. This helped BBQ see an attributable lift of 26% in customer frequency, and almost a 50-to-1 return on marketing spend.

For the remainder of 2021, BBQ Holdings has a lot to be excited about. As mentioned, two franchise-operated locations are opening up new models, the cafeteria-style line and the drive-thru. The cafeteria-style line is expected to make ordering a meal more efficient for store operators, and allow customers to get their meals in under three minutes. The company also has contracts in place for 90% of commodity spend through Q3, which provides good pricing and will help control costs.

After first-quarter numbers came in, the company also decided to raise its 2021 guidance by $5 million for net revenue, and net income was raised by 50%, from an average of $1.8 million to $3 million.

The grills are fired up, pandemic restrictions are gradually being lifted, and a new strategy is in place for a new service model. Just keep an eye on the stock price. It's recently been on fire, rising from $4.90 to a recent $15 since the start of the year, and the current P/E ratio is at 65, compared to an average of 49 for the restaurant industry.

You may or may not be visiting one of the 117 U.S. Famous Dave's locations, or possibly one of the other BBQ Holdings locations this summer, but with a turnaround strategy in place and a first quarter to prove it, now might be a good time to consider adding BBQ Holdings to your portfolio menu.