Please ensure Javascript is enabled for purposes of website accessibility
Log In Help Join The Motley Fool
Free Article Join Over 1 Million Premium Members And Get More In-Depth Stock Guidance and Research
By Timothy Green - May 27, 2021 at 7:20AM

These retail stocks could rally as consumers return to stores.

More than half of U.S. adults are now fully vaccinated against COVID-19. The pandemic isn't over in the U.S., but consumer behavior is starting to change. While some of the shift to e-commerce may prove permanent, people are returning to retail stores. 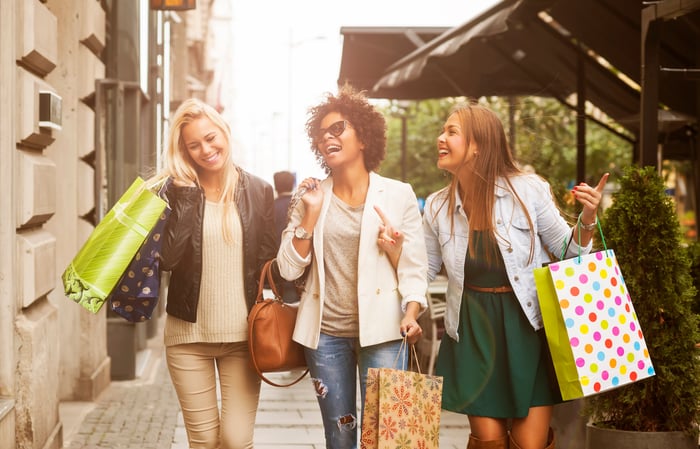 Shopping malls were not the business to be in when COVID-19 forced lockdowns last year. Some mall operators that were already struggling before the pandemic filed for bankruptcy, while others muddled through.

Tanger survived the pandemic. Solid liquidity was part of the equation, as was the fact that Tanger's outlet malls are largely open air. An investment in Tanger as COVID-19 raged last year was a bet that the company would make it through to the other side.

With more than half of U.S. adults now fully vaccinated, shoppers are returning in force to Tanger's outlet centers. Traffic to Tanger's properties reached 97% of 2019 levels in the first quarter of 2021. Rent collections have also normalized, with Tanger collecting 95% of contracted rents for the first quarter. The company allowed tenants to defer some rents early in the pandemic and now has collected 83% of those deferred rents.

In terms of liquidity, Tanger's in good shape. It raised nearly $130 million during the first quarter by selling new shares, allowing it to pay down a term loan and partially redeem some senior notes. The company has no significant debt maturities until the end of 2023.

Tanger expects to produce as much as $1.57 in per-share adjusted funds from operations (FFO) this year. Factored into this guidance is the expectation of store closures and lease adjustments related to tenant bankruptcies and restructuring. Fully recovering from the pandemic may take years, but Tanger is on the right track.

The company trades at just 11 times the high end of its adjusted FFO guidance, so the stock could surge as shoppers flock to the company's open-air outlet centers.

Department stores were also hit hard by the pandemic, but the best of the bunch could recover in a big way as consumers look to scratch their shopping itches after a year of restrictions and fear. Nordstrom's latest earnings report disappointed investors, but the numbers are moving in the right direction.

The company's sales soared 44% in the first quarter, no surprise given that stores were closed for half of the first quarter last year. Sales were down 13% compared to the same period in 2019, so things aren't quite back to normal yet. Digital sales accounted for 46% of total sales and were up 23% year over year.

Nordstrom reported a loss for the first quarter, but the company expects to be profitable on an operating basis for the year. The company sees sales soaring more than 25% in 2021, with an operating margin around 3%. Lower debt payments will help the bottom line -- Nordstrom redeemed some high-interest debt and issued lower interest debt in April, which will reduce its annualized interest payments by about $30 million.

Nordstrom had $377 million in cash and nearly $1 billion in total available liquidity at the end of the first quarter. The stock isn't particularly cheap relative to expected earnings, but it's historically cheap relative to sales. Analysts are expecting earnings to nearly double next year as the pandemic era comes to an end.

A strong comeback for Nordstrom isn't a guarantee, but the retailer is well positioned to benefit from a surge in in-person shopping as the pandemic draws to a close.