Please ensure Javascript is enabled for purposes of website accessibility
Log In Help Join The Motley Fool
Free Article Join Over 1 Million Premium Members And Get More In-Depth Stock Guidance and Research
By Rich Smith - May 27, 2021 at 6:52AM

One of these things is (no longer) like the others.

But in one case, it may have been a mistake. 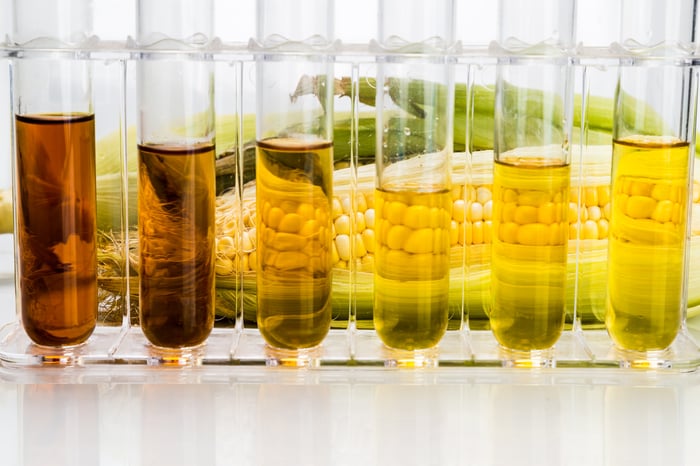 Historically, all three of Amyris, Gevo, and Aemetis have been known as "biofuel" stocks. That made them all logical beneficiaries of an announcement on Tuesday that Sens. Chuck Grassley (R-Iowa) and Maria Cantwell (D-Wash.) had jointly introduced a bipartisan Biodiesel Tax Credit Extension Act of 2021 to the Senate. If passed, the bill will extend the current federal biodiesel tax credit program -- worth $1 per gallon of biodiesel produced -- through 2025.

There's just one problem: While a cursory Google search for "biodiesel stocks" features all three of these stock names prominently, in fact, Amyris largely exited the biofuels market years ago, and currently spends most of its time developing biotech products for the clean health and beauty markets.

Even in the two cases where today's run-ups are more justified -- Gevo and Aemetis, both of which are still in the biofuels game -- caution may be in order. For one thing, the extension of tax credits for biofuels, while supported by influential legislators in the Senate, is not sure to pass.

For another, even with tax credits for biofuels in place, neither Gevo nor Aemetis has yet figured out a way to consistently profit from selling the stuff. Over the past decade, Aemetis has booked a full-year GAAP profit only once (in 2014), and Gevo -- not at all. To the contrary; according to data from S&P Global Market Intelligence, over the last three years, both companies' losses have actually increased.

Maybe the protection of a "green"-friendly administration in the White House, and the help of an extension of the tax credit, will change that -- but don't be too surprised if it doesn't.