Please ensure Javascript is enabled for purposes of website accessibility
Log In Help Join The Motley Fool
Free Article Join Over 1 Million Premium Members And Get More In-Depth Stock Guidance and Research
By Howard Smith - May 27, 2021 at 5:40PM

Earnings from this New Holland and Case equipment dealer is more evidence of an ongoing boom in agriculture.

Titan reported 20% growth in revenue for its fiscal first quarter ended April 30, 2021. But net income exploded by more than 350% versus last year. That supports what Deere also reported in the sector last week. Deere said sales in its fiscal quarter ended May 2, 2021 increased 34%, resulting in net income growing 169% compared to its year-ago period. 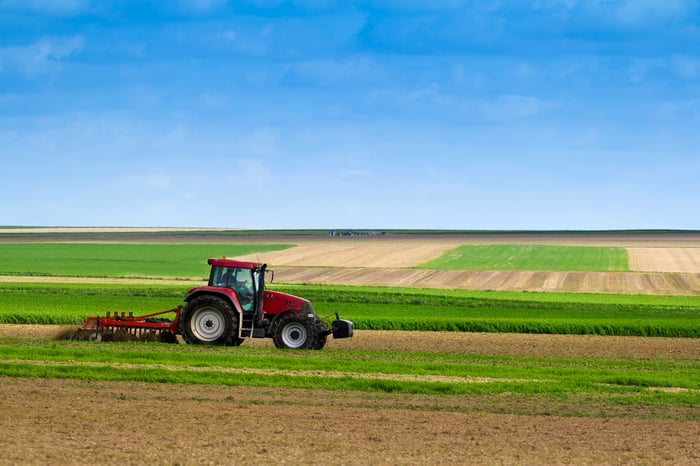 Rising commodity prices have been driving a surge in farming equipment. In its earnings call, Deere said it sees growth in agriculture across every global geographic area for fiscal 2021. The much-smaller Titan sells and rents the competing Case and New Holland brands in its dealer network that operates in nine U.S. states as well as five European locations.

Shares of both companies had almost equally benefited from the boon in the sector before investors piled into Titan shares in today's trading session. 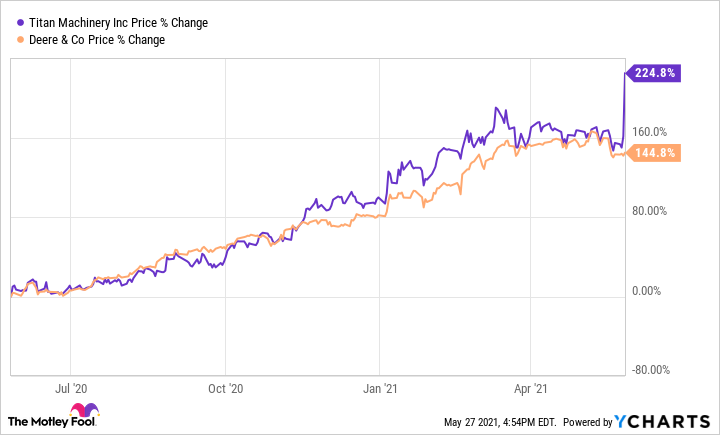 Titan chairman and CEO David Meyer echoed Deere's outlook, saying in a statement: "The renewed strength across the agriculture complex, following an improved commodity outlook, is having a positive impact on all our businesses." He noted a shift in the business environment, adding the company is seeing "some of the pent-up demand come back after several years of more conservative posturing." Investors in Deere and other names in the sector should also be happy to hear that.