Please ensure Javascript is enabled for purposes of website accessibility
Log In Help Join The Motley Fool
Free Article Join Over 1 Million Premium Members And Get More In-Depth Stock Guidance and Research
By Leo Sun - May 28, 2021 at 5:05AM

My diversified bet on the market's highest-growth tech stocks backfired.

I bought a new position in Cathie Wood's flagship exchange-traded fund, the ARK Innovation ETF (ARKK 4.19%), back in February. At the time, I thought it was a good way to gain some diversified exposure to higher-growth stocks that I didn't want to start full positions in.

Unfortunately, I bought the ETF near its all-time highs, and it's now trading about 30% below my purchase price. I'm not losing any sleep over ARK's losses, since the ETF only accounts for 1.6% of my portfolio, but I'm also reluctant to add more shares, for five simple reasons. 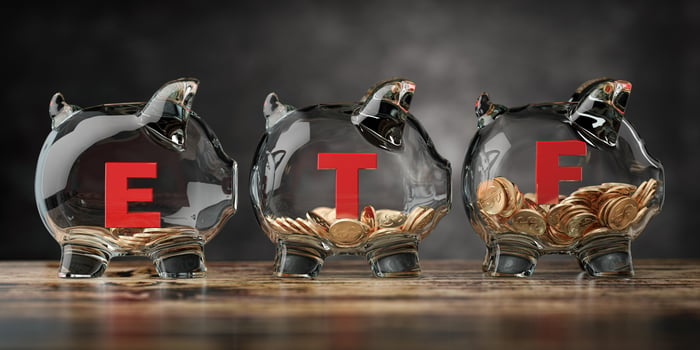 1. Most of ARK Innovation's top holdings trade in tandem

ETFs that track major indexes, such as the Vanguard S&P 500 ETF (VOO 1.71%), provide instant diversification across multiple sectors. However, the ARK Innovation ETF mainly invests in high-growth tech companies, many of which are unprofitable and trade at frothy valuations.

As a result, most of its top holdings rise and fall in tandem -- which doesn't make it much safer than an individual stock. That also nullifies my plan to own the ETF for its "diverse" portfolio of growth stocks.

The ARK Innovation ETF soared nearly 150% last year as investors flocked to tech stocks throughout the pandemic. A new breed of retail investors, empowered by free trading platforms like Robinhood, amplified those gains. Many of those investors adored ARK Innovation's top holdings, which include Tesla, Teladoc, Roku, Square, and Shopify.

However, many of those stocks have underperformed the S&P 500 this year as higher bond yields, inflation fears, and a focus on reopening plays have sparked a rotation from growth to value stocks. That rotation will likely continue for the foreseeable future, and prevent ARK's top stocks from beating the market.

3. Swapping out stable growth stocks for speculative ones

As the ARK Innovation ETF floundered, it sold its more stable stocks -- including Apple, NVIDIA, and Baidu -- and bought more speculative ones, like Palantir, Coinbase (COIN 7.73%), and Skillz (SKLZ 7.34%).

That trend is troubling, because it suggests ARK is trying to replicate its previous gains by chasing growth and hype at any price. I also wouldn't personally buy stocks like Coinbase and Skillz because they have glaring weaknesses: Coinbase is essentially an all-in bet on cryptocurrencies, while Skillz is still deeply unprofitable and overwhelmingly dependent on just two game publishers.

4. It's easy to buy ARK's winners while avoiding its losers

I can understand why ARK's ETFs might appeal to some inexperienced investors. They offer exposure to a wide range of companies that have disruptive growth potential, and the fund only needs a few winners to offset its losers.

But as someone who follows the stock market daily, I should have simply used ARK's holdings as a starting point for fresh investing ideas. If I did that, I probably would have bought more shares of promising companies like Shopify and Square while avoiding stakes in speculative companies like Coinbase and Skillz.

Invesco's QQQ ETF (QQQ 1.95%), the popular fund that holds a diverse basket of top tech stocks like Apple, Amazon, and Microsoft, charges an expense ratio of just 0.2%. Here's how ARK Innovation fared against those two ETFs this year. 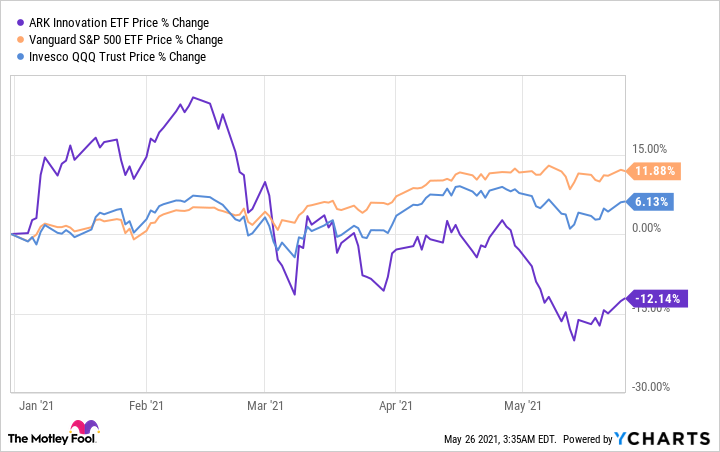 ARK Innovation might eventually recover, but it could struggle to justify its higher fees if its current slump continues. Therefore, it's not surprising that the fund was hit by record redemptions over the past few months.

I don't plan to sell my ARK Innovation shares anytime soon, but I also don't plan to average down with more shares. For now, I think it's a better idea to be selective with individual growth stocks instead of trying to cast a wide net over all of the market's hottest names with this overpriced ETF.