Please ensure Javascript is enabled for purposes of website accessibility
Log In Help Join The Motley Fool
Free Article Join Over 1 Million Premium Members And Get More In-Depth Stock Guidance and Research
By Neil Patel - May 28, 2021 at 7:20AM

PayPal and Square have the potential to reward investors over many years, but in the past few months, their share prices have slumped.

Worries about rising inflation (and interest rates) as the economy starts to heat back up have led some investors to sell off their high-flying growth stocks in favor of value plays that had been underperforming for the past year. But even with their stock prices down double-digit percentages from their 52-week highs hit in mid-February, PayPal Holdings (PYPL -1.08%) and Square (SQ -1.42%) are still up in price by about 85% and 190%, respectively, from their 52-week lows.

These two fantastic businesses are prospering from a broad shift to digital payments, and they are my top fintech stocks to buy right now. Let's take a closer look at why that is. 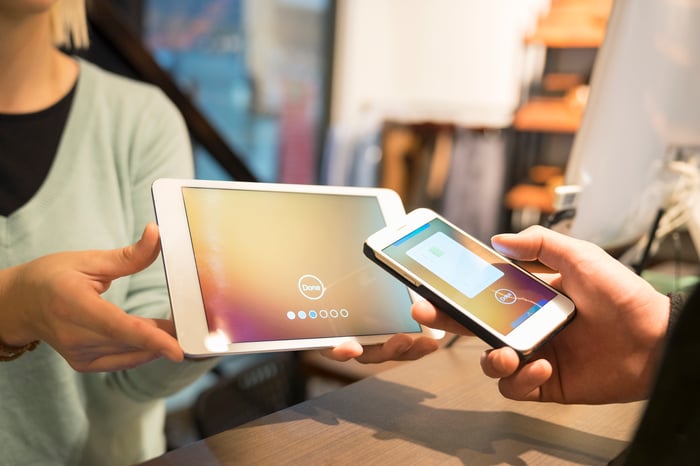 PayPal was an early pioneer in the shift toward digital transactions, and its importance was never more apparent than in 2020, when its revenue rose by 20.7% and profits soared by 70.9%.

As people were compelled to do much more of their shopping online, the economic environment was tailor-made for PayPal. And while the pandemic only accelerated the ongoing secular shift to digital payments, the momentum hasn't slowed this year. In the first quarter, the company added 14.5 million net new active accounts and processed $285 billion worth of transactions, an impressive 46% jump from the prior-year period.

PayPal's competitive advantage comes from powerful network effects that are only getting stronger. As of March 31, the business had 392 million total active accounts -- and CEO Dan Schulman said he believes that metric could one day reach 1 billion. This is certainly in the realm of possibility given PayPal's ambitions to play an increasingly central role in merchants' and consumers' financial lives.

The company continues gaining traction by innovating and introducing more capabilities, such as in-store QR code payments and a buy-now-pay-later option. Furthermore, its popular Venmo app, which saw payment volume increase 63% in Q1, now has tools that let users buy, sell, and hold cryptocurrencies. Expect even more updates to the company's apps later this year.

"Our record-breaking first quarter results underscore the ongoing strength, diversification, and relevance of our scaled, two-sided, global payments platform. We are raising our FY'21 guidance based on these strong results," CFO John Rainey said in the earnings release.

The stock price is down 15.9% from highs in mid-February, giving investors a potential buying opportunity in this great business.

Square, too, has benefited from the move toward greater use of electronic payments. The company is now a major enabler and supporter of small businesses, with a large suite of products and services that make it an increasingly important partner.

In the most recent quarter, its gross profit soared 79% year over year, driven by 171% growth in its Cash App ecosystem. Cash App can be viewed as a funnel through which Square draws new users into its platform. The mobile app allows people to send and receive money, handle their banking needs, and buy, sell, and hold Bitcoin. Additionally, the company offers a free debit card that also offers shopping discounts. In March, Square counted 10 million monthly active customers using its debit card.

Square's seller ecosystem is gaining more larger clients, too. In Q1, gross payment volume (GPV) for mid-market sellers (those with annual GPV greater than $500,000) rose 43% compared to the prior-year quarter. This was more than double the growth in total seller GPV. That's significant because it helps to reduce the macroeconomic risks that the business dealt with in 2020, as the pandemic caused the most pain to the smallest businesses.

Square continues its push to expand its products internationally. In the first quarter, the business added new offerings in Japan, the U.K., and Australia to enable wider use of contactless payments. Its hope is to mimic in overseas markets the successes it has had domestically.

Since mid-February highs, Square's stock has fallen by 22%. Investors who have been on the sidelines waiting for a pullback should consider scooping up shares in this high-growth company now.

This is an exciting time in fintech, particularly in the payments space, and adding PayPal and Square to your portfolio would be among the best ways to get exposure to this industry. The world is moving steadily toward greater use of digital payments in a trend that the pandemic only accelerated, and these two companies are at the forefront.

Both are intensely focused on innovation, and they each stand to gain tremendously as more users sign up for their products and services, and as established users engage with them at a higher rate. That's why they are my top fintech stocks to buy now.