Please ensure Javascript is enabled for purposes of website accessibility
Log In Help Join The Motley Fool
Free Article Join Over 1 Million Premium Members And Get More In-Depth Stock Guidance and Research
By Rachel Warren - May 29, 2021 at 8:13AM

Even $100 invested in these three stocks could help you to set up your portfolio for long-term success.

When it comes to investing, there are a few common misconceptions. One is that you need to have a lot of money to build a winning portfolio. Another is that the cheapest stock is the best stock. For example, investments like penny stocks often appear promising at first glance if you have a more modest sum to invest and are hoping to produce market-beating portfolio returns.

But the reality is that many penny stocks can introduce unnecessary volatility to your basket of holdings and actually hinder rather than stimulate optimal portfolio performance. Rather than putting your hard-earned cash into high-risk penny stocks, here are three rock-solid companies to consider buying instead. 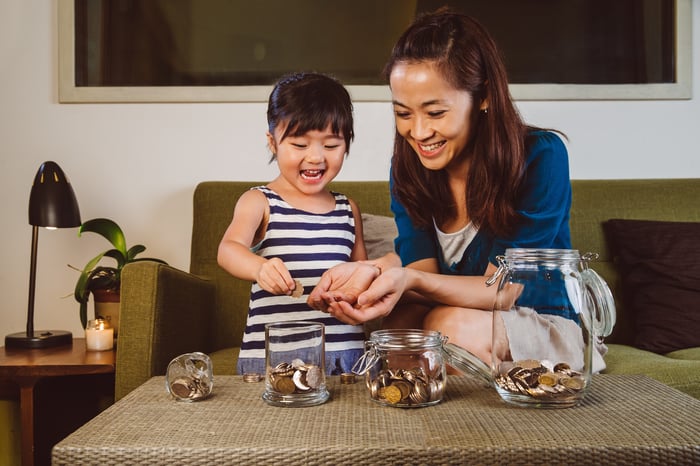 Online retailer Chewy (CHWY 7.36%) sells pet food along with a variety of other pet products, including toys, treats, and even medication for everything from dogs and cats to farm animals. The stock is still relatively affordable at about $75 per share. However, analysts have set its price target at around $133, which gives the stock impressive upside potential of around 80%.

Chewy has positioned itself as a key player in the lucrative pet products market, which generates consistent consumer demand on a year-round basis regardless of economic volatility. In 2018, the global pet food industry -- a mere sliver of this broader market -- achieved a valuation of more than $83 billion, according to Grand View Research. Another study released by the American Pet Products Association in March revealed that consumers shelled out more than $103 billion on their pets in 2020, and that was just in the U.S.

2020 was definitely a banner year for Chewy. The company reported that its net sales surged 47% and its gross margin spiked 190 basis points from 2019. In the company's full-year earnings report, CEO Sumit Singh said that the company also boosted its "customer base by 43 percent year-over-year, delivered our first full year of positive adjusted EBITDA, and generated the company's first quarter of positive net income in the fourth quarter of 2020."

After a year of big wins for Chewy, analysts think the company is just getting started. In fact, they estimate that Chewy can deliver triple-digit average annual earnings growth for the next five years.

In a day and age when more and more people are turning to online shopping over buying in person, Chewy's robust e-commerce footprint in the pet products sector gives the company a distinct competitive advantage over brick-and-mortar retailers with less robust online presences. Shrewd investors shouldn't wait to capitalize on Chewy's long-term growth potential.

Intuitive Surgical's (ISRG -0.49%) leadership in the field of robotic-assisted surgery has enabled it to maintain remarkable recession resilience. The company trades at a premium -- more than $830 per share -- but the beauty of fractional investing is that you don't have to pay the full price tag if you have a set amount in mind that you want to spend on stocks.

Intuitive Surgical has continued to record steady gains throughout the pandemic despite the market's ongoing volatility. At the time of this writing, the stock is trading about 46% higher than it was just 12 months ago.

Intuitive Surgical saw a slight decline in its revenue in full-year 2020. This was to be expected: Global surgery delays during the pandemic resulted in the company shipping and installing fewer of its da Vinci surgical systems than usual. However, things were moving upward in the fourth quarter when revenue grew 4% year over year. The company reported that its installed base of da Vinci surgical systems increased 7% year over year, while the number of da Vinci procedures that took place in the quarter jumped 6% from the year-ago period.

The company has already started 2021 on a high note. In the first quarter, Intuitive Surgical shipped 26% more of its surgical systems to customers than it did during the year-ago period, and its installed base of da Vinci surgical systems was up 8% year-over-year. Moreover, the number of da Vinci procedures that took place during the three-month window represented a 16% increase from the first quarter of 2020.

As a result, Intuitive Surgical reported first-quarter revenue and net income growth of 18% and 36%, respectively, over the year-ago period. And breaking down Intuitive Surgical's revenue by business segment, its instruments and accessories revenue grew 14% year over year, while system revenue surged 30%.

The company also grew its cash position by a whopping $361 million in the first quarter to end the period with a robust $7.2 billion in cash, cash equivalents, and investments on its balance sheet.

According to a recent report by Research and Markets, the surgical robotics industry is on track to achieve a global valuation of nearly $17 billion by the year 2031. And as of 2020, Intuitive Surgical controlled an eye-popping 79.8% share of this behemoth market. In short, if you're wondering when would be a good time to invest in this healthcare stock before it shoots even higher, the answer is right now.

Amazon (AMZN -0.99%) continues to generate astonishing business growth and fuel consistent investor returns no matter what's happening in the broader market. This makes it an excellent growth tech stock to add to your buy list during periods of both market volatility and tranquility.

There's no getting around the fact that Amazon is expensive. Trading at more than $3,200 per share at the time of this writing, it's another ideal candidate for fractional investing if you want to add a high-caliber egg to your basket for the price of a penny stock.

Amazon's financial performance in the first quarter of 2021 was simply a continuation of its lofty track record of growth. During the three-month period, the company reported that its net sales spiked 44% and net income grew 224% year-over-year. Online retail sales continue to fuel exponential growth for Amazon, but that's only a single slice of its diverse stable of businesses.

Prime Video is just one example of a thriving business unit that is contributing more and more to Amazon's growth story. In the first-quarter report, CEO Jeff Bezos said that streaming hours on Prime Video rose by 70% from the year-ago period. And the company is moving quickly to expand its Prime Video offerings and augment its competitive advantage in the fast-growing world of on-demand streaming services. On May 26, the company announced a landmark deal to acquire MGM, which will not only ramp up the capabilities of Amazon Studios, but will also usher in a vast roster of thousands of beloved classic films into the Prime Video family.

The company's Amazon Web Services (AWS) business has also made it a force to be reckoned with in the cloud computing universe. Bezos said in the company's first-quarter earnings report that "AWS has become a $54 billion annual sales run rate business competing against the world's largest technology companies, and its growth is accelerating -- up 32% year over year."

Amazon is forecasting that it will deliver between 24% and 30% net sales growth in the second quarter alone. For long-term investors, Amazon isn't just the gift that keeps on giving -- it's one of those stocks you can buy and never, ever sell.