Please ensure Javascript is enabled for purposes of website accessibility
Log In Help Join The Motley Fool
Free Article Join Over 1 Million Premium Members And Get More In-Depth Stock Guidance and Research
By Jason Hawthorne - Updated Jun 3, 2021 at 9:48AM

The only thing similar between these two assets is the price.

With meme stocks and cryptocurrencies once again capturing the imagination of investors, it's important to add some perspective. One of the great innovations of the stock market is that it allows individuals to own small pieces of large cash-producing businesses. That's important because not all assets are created equal, even if they are priced the same.

Right now, the total value of Dogecoin (DOGE -14.41%) is about $54 billion. That's the same value as one of the best biotech companies around. Vertex Pharmaceuticals (VRTX -1.65%) dominates the market to treat one rare but life-threatening disease and has a pipeline of candidates targeting six others. It's also cheaper than the broader market. Those are just a few of the traits that could make it a much better investment over the next several years than a digital currency that started as a joke. 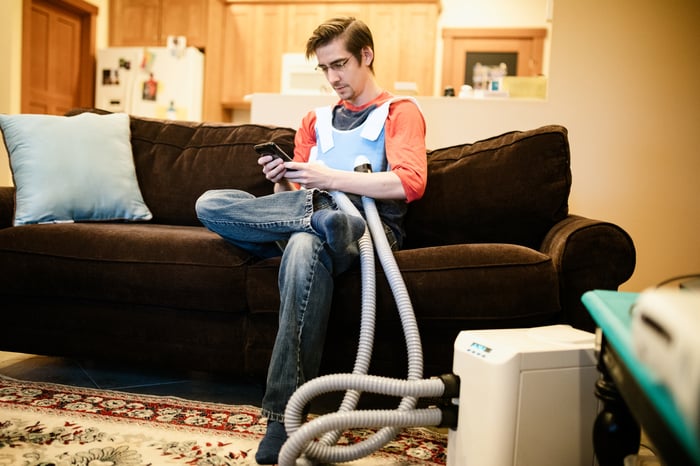 A leader in treating a rare genetic disease

Cystic fibrosis (CF) is a disease caused by mutations in the CFTR gene. When children inherit one defective CFTR gene from each parent, the flow of salt and water in and out of the cells is inhibited. This leads to a sticky buildup of mucus that blocks the passages in several organs. It is especially troublesome in the lungs, where it can lead to chronic infections and lung damage. The company's drugs help the right proteins reach the cell surface to improve the flow of salt and water.

The newest drug from Vertex -- marketed as Trikafta in the U.S. and Kaftrio internationally -- was approved by the Food and Drug Administration (FDA) in 2019 and the European Commission (EC) in 2020. It is a twice-daily regimen of pills that management estimates can help 90% of CF patients. Unlike previous treatments that merely delayed the damage to patients' lungs, it actually increased the amount of air they could force out by 14%.

Not satisfied with the status quo

It's clear management isn't resting on its laurels. Vertex has innovated for the past decade, with CF drugs approved by the FDA in 2012, 2015, 2018, and 2019. Later this year it will begin phase 3 trials for another combination therapy that promises superior results in a once-per-day dosing regimen.

For the 10% of patients who do not possess the common mutation addressed by Trikafta/Kaftrio, the company is pursuing gene therapies. Unfortunately, none have entered clinical trials.

Beyond CF, Vertex recently inked a four-year deal to expand its partnership with CRISPR Therapeutics. It will pay $900 million and take on 60% of the cost to develop and commercialize CTX001. That's the pair's candidate to cure sickle cell disease and transfusion-dependent beta thalassemia. Vertex will also get 60% of global profits. Early results from the treatment have produced very strong results that have been called an effective cure. Even patients dosed two years ago continue to be symptom-free. It's the latest stage in a collaboration that has been ongoing since 2015.

There is still opportunity

For the time being, the financial performance of Vertex will rely on its ability to continue gaining share in the CF market. Management estimates about 83,000 people in the U.S., Canada, Europe, and Australia have CF, and nearly 50% are treated with medicines from Vertex. Another 30,000 patients are currently untreated. With Trikafta/Kaftrio able to help 90% of those, there is still ample room for growth. It doesn't take many new patients to move the needle. Vertex's life-changing medicine comes with a price tag of $311,000.

The company posted revenue of $6.2 billion in 2020 and recently reported first-quarter sales that grew 14% year over year. Using expected 2021 earnings, the company's forward price-to-earnings ratio is 19.3. That's cheaper than the 22.6 of the S&P 500 index. Even more enticing, its free cash flow as a percent of sales has topped 35% for the past three years. That's comparable to cash flow titans Adobe Systems and Microsoft.

Investors thinking about putting money to work may want to consider an asset with a history of innovation, dominant market share, and the potential to grow new revenue streams. Unlike a digital currency designed as a joke, Vertex Pharmaceuticals is saving lives and generating cash for shareholders. That's a combination investors should be happy with. Although it might be fun to watch, the same can't be said for Dogecoin.