Please ensure Javascript is enabled for purposes of website accessibility
Log In Help Join The Motley Fool
Free Article Join Over 1 Million Premium Members And Get More In-Depth Stock Guidance and Research
By Timothy Green - Jun 4, 2021 at 7:10AM

Betting on the disruptors hasn't worked out this year.

If you had to guess at the start of the year which electric vehicle stocks would produce the best returns by the beginning of June, you would have likely been wrong. It's been a bloodbath for the most part.

Shares of industry leader Tesla are down around 15% year to date, and they're down more than 30% from their recent high. Upstarts like Workhorse, Lordstown Motors, and Canoo have suffered even steeper declines. Investors are no longer giving the benefit of the doubt to pre-revenue electric vehicle companies. 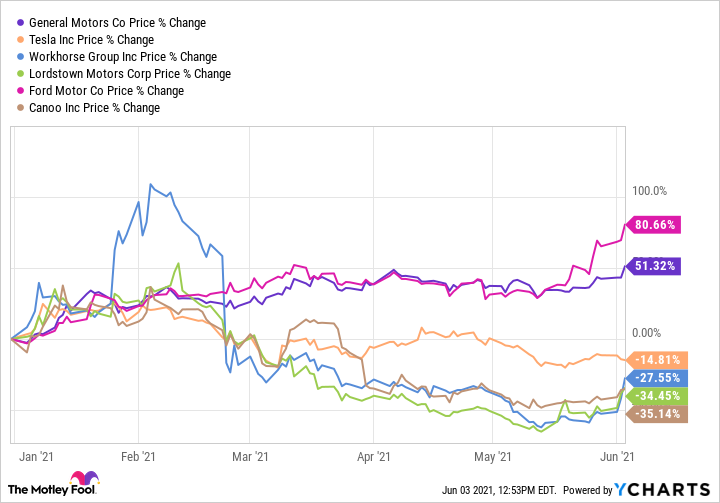 GM aims to be a leader

GM is planning to launch 30 new electric vehicles globally by 2025. Many of these vehicles will be based on GM's modular Ultium platform, which will accommodate a wide range of vehicle types. The core of the platform is GM's Ultium battery technology.

Thanks to the Ultium platform, GM has managed to nearly cut its vehicle development time in half. This newfound nimbleness will help the company achieve its goal of delivering over 1 million electric vehicles by 2025. GM is aiming for the top -- the company expects to be the EV market leader in North America by that year. 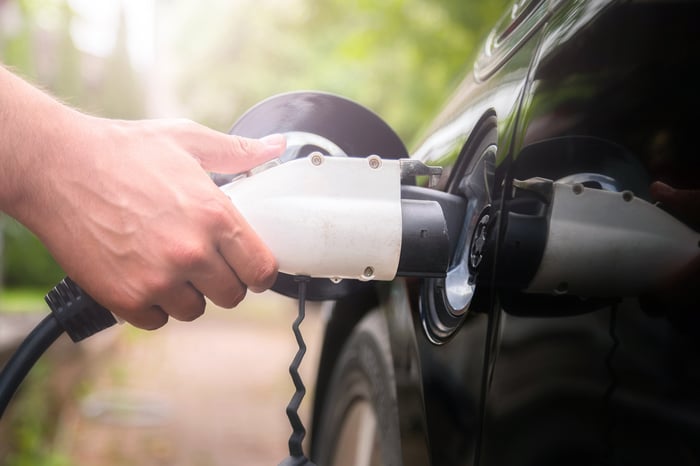 Selling its truck customers on electric vehicles is going to be the key to GM hitting its targets. The company sold nearly 600,000 Silverados in the U.S. in 2020, along with over 250,000 GMC Sierras. GM sold more Silverado trucks in the U.S. last year than Tesla's total global vehicle volume, to put it in perspective.

In the near term, GM is facing the consequences of the global semiconductor shortage along with all car companies. However, GM now expects to produce better results in the first half of this year compared to its prior guidance. The company has made progress optimizing chip usage, and it's planning to ramp up production of its most profitable vehicles. GM's scale is likely giving it an advantage here as it works to secure semiconductor supply.

With GM expecting to produce adjusted earnings per share as high as $5.25 this year, good for a price-to-earnings ratio of just 12, GM looks like a relatively low-risk way to bet on electric vehicles.

Disrupting the pickup truck market is a compelling story, but market leader Ford isn't going to sit back and let upstarts like Lordstown Motors steal away sales. Ford dropped a bombshell last month when it revealed an all-electric F-150 pickup truck at a surprisingly affordable price.

Ford sold around 800,000 F-150 trucks last year. Given the price and capabilities of the F-150 Lightning, there's just no reason to believe this thing isn't going to be in high demand when it launches next year. What disrupts Ford's gas-powered truck business may end up being Ford's electric-powered truck business, instead of a new product from an unproven company like Lordstown.

Like GM, Ford expects to produce plenty of profit this year despite the semiconductor shortage. Ford expects to produce adjusted earnings before interest and taxes between $5.5 billion and $6.5 billion in 2021. The company is valued right around $60 billion, so Ford could be a good way to bet on the growth of the electric pickup truck market without having to take a big risk.