Please ensure Javascript is enabled for purposes of website accessibility
Log In Help Join The Motley Fool
Free Article Join Over 1 Million Premium Members And Get More In-Depth Stock Guidance and Research
By Parkev Tatevosian - Jun 4, 2021 at 8:30AM

The online pet store is expecting to report robust revenue growth when it announces earnings on June 10.

Chewy (CHWY -6.98%), the online pet retailer, is set to report first-quarter earnings on June 10. The company is experiencing surging sales during the pandemic with many folks looking to avoid shopping in stores.

Sometimes referred to as the Amazon of pet stores, because it sells exclusively online, Chewy also caught a tailwind from increased pet ownership during the pandemic. Many found that furry friends help make passing time at home a bit more pleasant. And unsurprisingly, many of those same folks looked to Chewy.com to deliver things necessary to keep their newfound companions happy and healthy.

As of this writing, the stock is up over 77% in the last 12 months as investors anticipate some of the customers gained during the pandemic will stick around long term. But has the stock run up too far, too fast? Or should investors still buy it ahead of the company's June 10 earnings announcement? 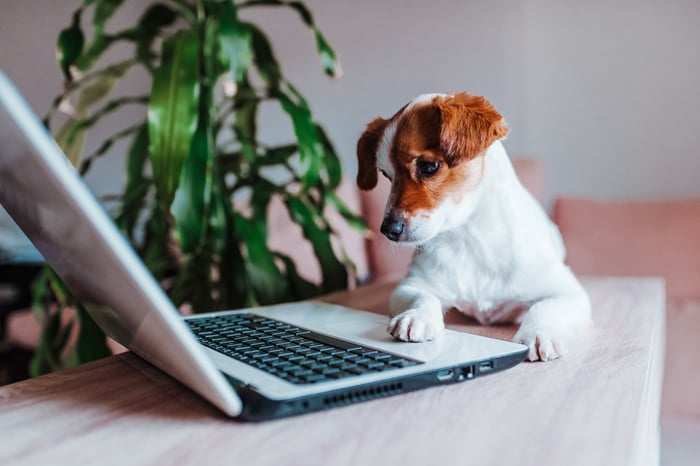 Chewy stock is up over 75% in 12 months. Image source: Getty Images.

Chewy is guiding for revenue of $2.12 billion at the midpoint, which would be year-over-year growth of roughly 30%. That would be a deceleration from the previous quarter's rate of 50.8%. Note, however, that management gave this guidance several months ago, before consumers got stimulus checks of $1,400 per person in March and April.

Those stimulus checks have fueled better-than-expected sales at several retailers, from Home Depot to Macy's. This phenomenon could cause Chewy to exceed its revenue guidance in the first quarter.

Chewy is forecasting revenue of $8.9 billion at the midpoint for the fiscal year, which would be year-over-year growth of roughly 24%. However, keep in mind that this is following a tough comparison in 2020, where revenue surged by 47.4% due to the pandemic.

Is Chewy stock a buy?

The company benefited from a surge in sales during the pandemic, but that doesn't mean it will lose those sales in the aftermath. Instead, Chewy is riding a longer-running tailwind from people moving spending away from brick-and-mortar stores to e-commerce.

Moreover, pets are a long-term commitment for most people; those bought or adopted are growing older and larger during the pandemic. According to industry analysts, pet ownership grew by 5.7% in 2020, almost 10 times faster than the 0.6% compound annual growth rate before the pandemic. They are going to eat more food, and their stronger teeth are going to destroy more toys.

That's in part what's causing forecasts for the pet industry to grow from a $100 billion market in 2020 to $120 billion in 2024. Chewy has roughly 7% market share right now, and as more sales move online, that share is likely to increase. 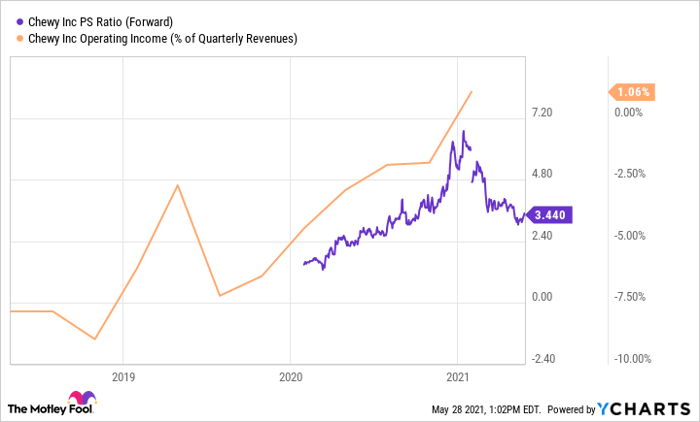 Its excellent long-run prospects and recent price decline mean that those interested in starting a position in Chewy can feel pretty good about buying shares ahead of earnings. But if you want to take a more cautious approach, you could split your purchase allocation in two and buy half ahead of earnings and half in the days following the announcement.

Why Chewy, Ollie's Bargain Outlet, and Petco All Slumped This Week

Up 54% in 1 Month, Does Chewy Stock Have Room to Go Even Higher?