Please ensure Javascript is enabled for purposes of website accessibility
Log In Help Join The Motley Fool
Free Article Join Over 1 Million Premium Members And Get More In-Depth Stock Guidance and Research
By John Ballard - Jun 5, 2021 at 7:15AM

There are multiple ways to invest in this fast-growing entertainment market.

Interactive entertainment is the fastest-growing entertainment category worldwide, reaching $177 billion in total revenue in 2020. Advances in graphics technology and adoption of mobile devices are making video games more immersive and accessible, which should continue to push the industry forward. 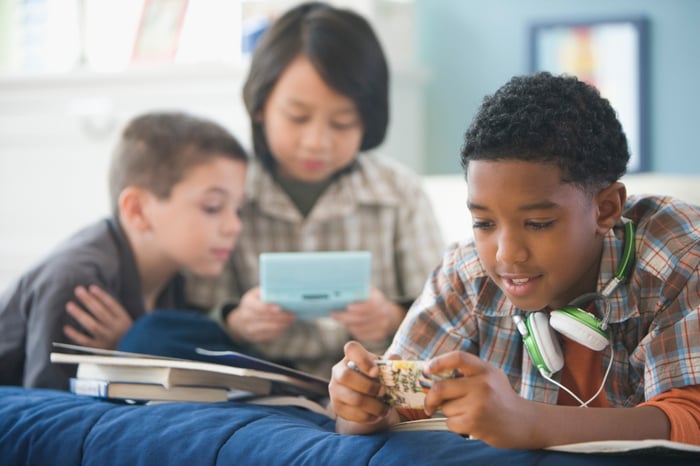 Take-Two is the company behind the popular Grand Theft Auto franchise, one of the best-selling titles of all time with over 270 million copies sold. The torch bearer of the series is currently Grand Theft Auto V (GTA V), which has sold 145 million copies. In the most recent quarter, GTA V and strong results from NBA 2K continued to deliver strong results, helping Take-Two achieve a record year in bookings (a non-GAAP measure of revenue).

While management expects lower total bookings this year, CEO Strauss Zelnick mentioned during the recent earnings call that they expect the addressable market opportunity to be "notably larger going forward than it was pre-pandemic."

To capitalize, Take-Two has several new titles in development, which management expects to produce record levels of bookings over the next few years. PGA Tour 2K21 launched last year and has sold more than 2 million copies. In the fiscal fourth quarter, Take-Two acquired the creator of PGA Tour, HB Studios, signaling management's satisfaction with the title's results so far and the desire to invest further in its development to drive growth for future installments.

The stock reached a high of $214 in January before pulling back over the last few months. The share price bounced after the recent earnings report and currently sits at $185 at the time of this writing, or a price-to-free cash flow (P/FCF) multiple of 25. This valuation looks reasonable relative to the companies' long-term growth prospects, making Take-Two one of the best game producers to consider buying right now.

Corsair Gaming is one of the leading brands of computer peripherals and system components primarily designed for gamers. The momentum from the pandemic carried over to the first quarter, with revenue up 71% year over year. With the stock down 12% year to date, this could be a great time to consider buying shares before better news sends the stock price higher.

Management is continuing to release new products, which is a good sign that the company sees healthy demand continuing in the near term. It released about two products per week in the first quarter and plans to maintain a steady pace of new releases through the year.

A discerning investor might think this strategy could backfire if demand suddenly falls off following the spike in sales during the pandemic. However, Corsair has been struggling to meet demand due to supply shortages. Getting more products on store shelves puts Corsair in position to gain market share once supply and logistics constraints ease.

Investors are still underestimating Corsair Gaming. Based on a better outlook for near-term demand, management raised full-year guidance and now expects revenue to be between $1.9 billion to $2.1 billion, or year-over-year growth of 11.6% to 23.4%. That outlook makes the stock a compelling buy at its current P/FCF multiple of 16.8.

Sony's gaming business was on fire last year. Sony reported a 9% increase in total revenue, with most of that increase coming from the game and network services business.

Demand for the new PlayStation 5 (PS5) game console has been incredibly strong, but Sony is having a difficult time meeting demand given the supply chain issues hurting many businesses right now. It sold 7.8 million units through fiscal 2020 (which ended in March), and management expects PS5 to become its biggest gaming platform ever.

Sony is currently in the process of upgrading PS4 owners. Supply problems have made this process slower, but the high interest in the PS5 bodes well for future growth, especially in subscriptions to PlayStation Plus and the PlayStation Now cloud gaming service. It's these categories, along with sales of software titles, that drive Sony's gaming profits.

Sony has made significant strides in recent years to shift its gaming business to tilt more heavily into higher-margin software and services, as opposed to relying on lower-margin hardware sales. PlayStation Plus subscribers have more than doubled to 47.6 million over the last five years.

The electronics giant is involved in a lot of different business segments, including music, pictures, imaging solutions, and financial services. But the growth opportunities in gaming and music, which together comprise most of Sony's total operating profit, make the stock worth owning at a modest P/FCF multiple of 15.6.