Please ensure Javascript is enabled for purposes of website accessibility
Log In Help Join The Motley Fool
Free Article Join Over 1 Million Premium Members And Get More In-Depth Stock Guidance and Research
By Harsh Chauhan - Jun 6, 2021 at 8:30AM

This cybersecurity company is preparing for a breakout 2021.

Check Point Software Technologies (CHKP 1.47%) hasn't been a top cybersecurity stock over the years when measured against its peers. The company's growth has been quite underwhelming compared to the broader cybersecurity market, translating into poor stock market returns.

The good news, however, is that Check Point is showing signs of a turnaround. It has been making moves to tap the fast-growing cloud security market, which seems to be reaping results. But can Check Point grow fast enough to remain competitive in the cybersecurity market and deliver strong upside to investors in the long run? Let's find out. 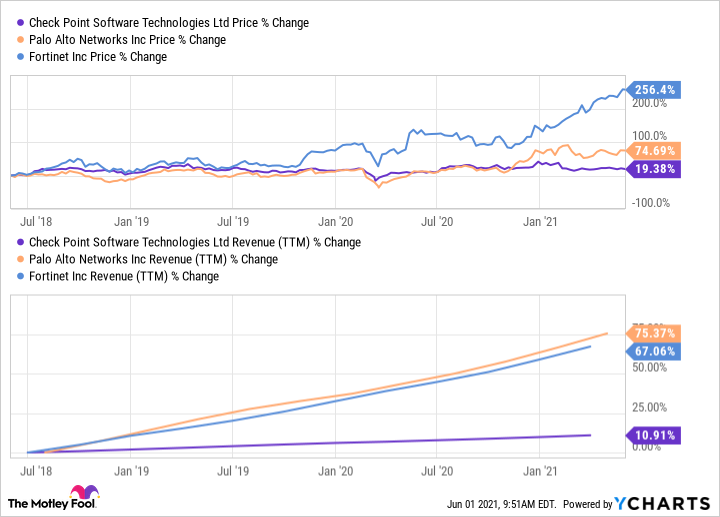 Check Point Software is stepping up its game

Check Point released its Q1 results in April. Its revenue increased 4% year over year to $508 million, while non-GAAP net income increased 9% to $1.54 per share. While this is nowhere near the terrific growth that rival Fortinet delivered during the same quarter, there were a few nice takeaways indicating that Check Point may be stepping on the gas.

For instance, Check Point's deferred revenue grew at a faster pace of 8% year over year when compared to the actual revenue, hitting $1.46 billion at the end of Q1. Deferred revenue is the amount of money collected in advance in lieu of services that will be rendered later. So, the faster rate of growth in this metric bodes well for Check Point's future, indicating that its subscription-based cloud business is gathering steam and setting it up for faster revenue growth.

Check Point's security subscription revenue shot up 12% year over year in Q1 to $177 million, up from the 10% growth seen in Q4 last year. The segment accounted for almost 35% of the company's total revenue. The segment's impressive growth was driven by Check Point's increased focus on cloud-based cybersecurity. The company is now offering three solutions geared toward the cloud security market -- Quantum (a network security solution), Harmony (aimed at securing the remote workforce), and CloudGuard (a cloud-native offering countering threats in a multi-cloud environment). Check Point is also offering a consolidated cybersecurity architecture known as Infinity, which integrates the three offerings mentioned above. This solution allows enterprises to secure multiple endpoints spread across the cloud, mobile networks, and the Internet of Things in real-time while lowering the operating costs at the same time.

Cloud security is a fast-growing market that's expected to clock nearly 15% compounded annual growth through 2025, as per a third-party estimate. So, it isn't surprising to see why Check Point's subscription business is growing at an impressive pace and outpacing its overall growth. What's more, the company anticipates the CloudGuard, Harmony, and Infinity platforms to clock double-digit percentage growth rates going forward, which seems achievable given the solid end-market opportunity at hand.

Is now a good time to buy Check Point?

Check Point's subscription business is clocking robust double-digit percentage growth. Its deferred revenue is nearing the double-digit growth mark as well. More importantly, the company's focus on cloud security seems to have given its customers and distribution channels a shot in the arm.

Check Point saw more than 14,000 customers and partners attending its virtual conference earlier this year, which was more than double the number of attendees in 2020. Though Check Point doesn't disclose the exact number of customers it has, its quarterly investor presentation does indicate that its customer count more than doubled at the beginning of 2021 over the year-ago period.

All of this indicates that Check Point could gradually deliver stronger growth rates than what it is currently clocking. That's why investors should think of accumulating Check Point stock as it is trading at 19 times trailing earnings, a discount to the five-year average multiple of nearly 22. Additionally, the company has a strong balance sheet with just over $4 billion in cash and no debt. It can put that cash to work by acquiring smaller, fast-growing companies in the cybersecurity niche or by spending more money on marketing and sales.

As such, Check Point has the necessary ingredients to turn into a growth stock in the future, which makes it an ideal bet for investors looking to buy a cybersecurity stock at a reasonable valuation.