Please ensure Javascript is enabled for purposes of website accessibility
Log In Help Join The Motley Fool
Free Article Join Over 1 Million Premium Members And Get More In-Depth Stock Guidance and Research
By Eric Volkman - Jun 6, 2021 at 8:15AM

The company posts yet another highly profitable quarter and pledges to maintain its high-yield dividend, but...

Tobacco giant Altria (MO -0.31%) has managed to attract investors to its stock despite a great many challenges. After all, the one-two punch of consumers seeking healthier lifestyles and sharpened anti-tobacco laws makes for a difficult business environment.

Yet the company continues to be very profitable, as shown in its first-quarter results, with its stock price generally cruising higher since those figures were released at the end of April. Let's pick the latest report apart and gauge whether the company is still a worthwhile investment or an also-ran that's mostly ash these days.

Altria wants you to smoke 'em if you've got 'em

Since Altria sells goods that are near-essential to its customers, it hasn't suffered as much economic damage from the pandemic as other companies. 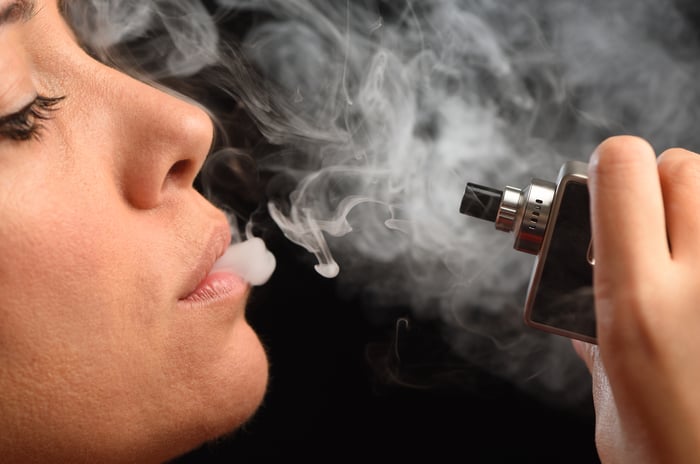 In the company's first quarter, it earned $4.88 billion in net revenue, which was down only 3% year over year. Attributable net earnings on an adjusted basis slipped by nearly that percentage, landing at $1.98 billion ($1.07 per share).

On average, analysts tracking the tobacco stock were modeling $4.98 billion on the top line, and an adjusted per-share net profit of $1.05. In other words, Altria notched a not-huge miss and a slight bottom-line beat for the quarter.

The company also reiterated its guidance for all of 2021. Management believes the company will book an adjusted per-share net profit of $4.49 to $4.62, which would represent a year-over-year improvement of 3% to 6%. It didn't provide a revenue estimate.

What Altria did say is that it intends to maintain its dividend policy, in which its long-term payout ratio target is roughly 80% of adjusted net profit. That certainly gave some comfort to investors who might not have been impressed by the quarter's mixed results, or the fairly tepid bottom-line guidance.

Altria is, after all, a top dividend stock, and such a policy should keep its yield nice and high. At the moment, the yield is nearly 7%, which is very rich for a major company on the exchange.

While I'm a fan of profitable set-it-and-forget-it companies that can eke out some growth every year, I feel Altria as a company (and therefore as an investment) has a cloudy future.

The U.S. government's intermittent war on Big Tobacco clearly isn't over, with the Biden administration stating its aim to cut nicotine levels in tobacco products and even bar the sale of menthol cigarettes entirely (although the latter will affect certain peer tobacco makers far more than Altria).

And while Altria has made a sensible push into alt-tobacco products, the company is stumbling with troubled e-cigarette maker Juul, in which it has a 35% stake. It has high hopes for Philip Morris International's (PM -0.37%) IQOS tobacco heating device, for which it has exclusive U.S. sales rights, but since overall U.S. tobacco use continues to plummet, I doubt this will be anywhere near the revenue-generator traditional cigarettes once were.

Cronos, however, is one of a slew of marijuana companies facing a domestic market beset by significant challenges. It frequently posts heavy losses and lacks a clear path toward regular profitability. Its share price has plunged since Altria's investment. U.S. decriminalization will open our massive market to Cronos, sure. But both Canadian and U.S. competitors will also pounce on the opportunity.

Altria is burning out

So for me, there are more threats than opportunities for Altria's stock. We do have to give credit to management for surviving, if not necessarily thriving, in the "down-with-smoking" era. Yet there's not much that even the most talented management can do to keep a fire lit when faced with ever-stiffening headwinds.

Why I Bought the Stock of This Hated Company