Please ensure Javascript is enabled for purposes of website accessibility
Log In Help Join The Motley Fool
Free Article Join Over 1 Million Premium Members And Get More In-Depth Stock Guidance and Research
By Adam Levy - Jun 6, 2021 at 7:07AM

Owning your own Tesla (stock) doesn't have to break the bank.

If you're a Tesla (TSLA -2.62%) owner, you may have no clue how much a tank of gas costs. And if you aren't a Tesla owner, you may be painfully aware of the drain on your wallet every time your tank is on E.

There's good news, though. You can become a Tesla (stock) owner for less than the cost of a tank of gas. 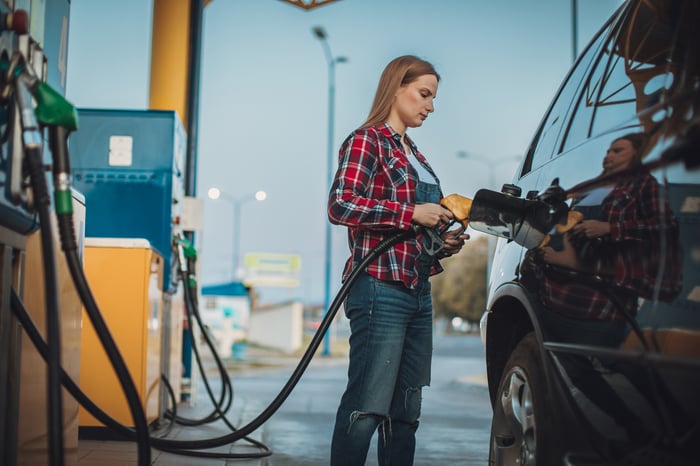 Tesla shares currently trade around $600, but many brokerages will allow you to buy fractional shares with no commission charges. So, instead of waiting until you've built up $600 in cash, you can trickle money into shares whenever you get it.

If you add to your investment every time you fill up your gas tank, eventually you'll have one full share. Think of it like slowly charging a Tesla with your standard 120V outlet instead of going to the Supercharger station and taking the battery back to full charge in 45 minutes.

On the other hand, if the stock goes down after you bought your initial piece of Tesla, you'll have an opportunity to buy an even bigger portion of a share on your next purchase. And since you're buying more but putting the same amount of cash in every time, your average price per share will weigh toward the lower end of your purchases. That's the magic of dollar-cost averaging.

Buying fractional shares at brokers that allow it is pretty straight forward. You make your standard buy order, but instead of putting the number of shares you want to buy, you put how much money you want to invest in dollars and cents.

Some brokers only allow fractional share trading on certain stocks. Considering the popularity of Tesla stock and its inclusion in the S&P 500 (^GSPC -0.07%), it's likely on the list.

Some brokers will have minimum investments, but the highest I've seen is $5. That's just a moped-sized-tank-of-gas worth of stock.

Some brokerages will allow you to regularly invest a certain amount of cash every week or month, too. So, if you wanted to buy $25 worth of Tesla shares every month, you could do so automatically with just a few minutes of setup. It's like putting your investments on autopilot mode.

A Nikola here, a Nikola there

Buying a few fractions of a share of Tesla is only part of a good investment strategy. While it's possible Tesla stock could repeat its performance of 2020, it's also capable of producing returns like its seen in 2021.

It's a good strategy to spread your investments across at least a handful of good companies in different industries with promising futures. That's a basic form of diversification, and it'll help protect your portfolio against the significant volatility of a single stock holding like Tesla.

The great thing is you can use fractional shares for most of your investments. So, if you can only add a few bucks to your investments at a time, you don't have to leave it sitting on the sidelines of your brokerage account waiting to buy stock. You can buy now.

So, put the pedal to the metal and get started.