Please ensure Javascript is enabled for purposes of website accessibility
Log In Help Join The Motley Fool
Free Article Join Over 1 Million Premium Members And Get More In-Depth Stock Guidance and Research
By Matthew DiLallo - Jun 7, 2021 at 10:39AM

The hotel REIT had some good news last month.

Shares of Ashford Hospitality Trust (AHT 3.40%) surged 47.8% in May, according to data provided by S&P Global Market Intelligence. Driving up the hotel REIT were its first-quarter results and improving fundamentals in the hotel market.

Ashford Hospitality Trust reported its first-quarter results in early May. While they were down significantly compared to last year's pre-pandemic first quarter, they were much better than expected. Overall, the hotel REIT reported an FFO loss of $0.30 per share, which was $0.43 per share better than the consensus estimate. Meanwhile, adjusted EBITDAre, while a negative $5.2 million in the quarter, marked its best-performing quarter since the pandemic started late in last year's first quarter. Further, the trust's hotel portfolio generated positive EBITDA during the quarter. The company is benefiting from improving hotel demand as vaccines roll out, giving people the confidence to travel once again. 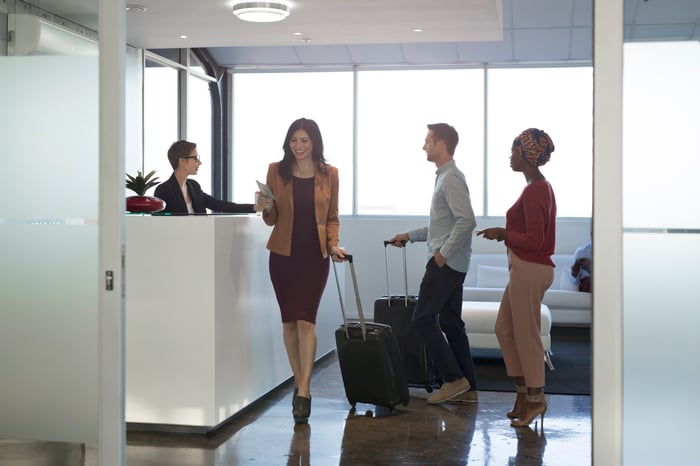 The REIT took several steps in recent months to strengthen its balance sheet. It secured forbearance agreements for $3.6 billion of loans and exchanged $325 million of preferred equity for common shares. Those moves enhanced its financial flexibility. That puts it in a stronger position to benefit from improvements in leisure travel as the pandemic subsides in the U.S.

Finally, the REIT's parent company, Ashford (AINC -2.79%), outlined four ways it can grow last month. That boosted shares of Ashford Hospitality Trust because one of the big growth drivers it sees ahead is the continued recovery of the hotel sector.

The hotel REIT continued to rally in June, surging 25% on the first of the month after disclosing that it completed another equity swap. It issued 7.54 million shares of common stock in exchange for 849,400 shares of preferred stock, reducing the amount of high-cost preferred stock it has outstanding.

As a result of that swap and its other financial moves in May, Ashford Hospitality Trust has a much-improved financial profile. That will put it in a better position to grow its earnings as hotel demand improves because it should benefit from higher occupancy levels and room rates. In addition, while the REIT's stock has nearly doubled this year, it's still 50% below its pre-pandemic value. That suggests it could have more room to run as the pandemic subsides and hotel demand recovers.

Why Ashford Hospitality Trust Stock Rallied as Much as 13% Today

Why Shares of Ashford Hospitality Trust Are Down This Week