Please ensure Javascript is enabled for purposes of website accessibility
Log In Help Join The Motley Fool
Free Article Join Over 1 Million Premium Members And Get More In-Depth Stock Guidance and Research
By Jason Hawthorne - Jun 10, 2021 at 6:11AM

This favorite of the retail crowd has something the others don't: growth and innovation.

Similar to AMC Entertainment and GameStop before it, Clover Health (CLOV -1.08%) is the new target of retail investors trying to drive a stock price higher. Unlike the previous price spikes, this healthcare upstart has a growing business and a data-dependent strategy that could lead to sustainable, long-term share gains.

Let's take a deeper dive to see why Clover Health might be the meme stock worth buying. 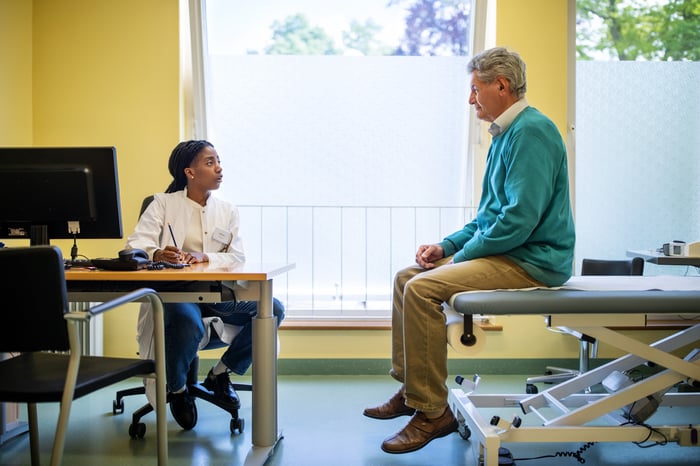 Clover stock is up more than 180% this month on six times the normal volume. That's reminiscent of late January, when the coordination of Reddit users on the WallStreetBets forum triggered a massive run in stocks that had a high short interest. It's also a theme this time. More than 43% of Clover Health's float -- the number of shares available for trading -- are being shorted.

Unlike the low-growth businesses of video game stores and movie theaters, Clover provides an artificial intelligence-based platform that helps physicians deliver better care at lower costs. So far, it has targeted Medicare-eligible patients. That's a growing population in a country where 10,000 people turn 65 years old every day. The Reddit crowd might actually be buying a company with excellent prospects for the future.

What WallStreetBets is betting on

The company's secret sauce is something called the Clover Assistant. It's a platform that brings patient data from many sources -- primary care physicians (PCPs), specialists, hospitals, clinics, labs, and pharmacies -- and marries it with socioeconomic factors to apply machine learning. The result is an interface for PCPs that guides them to improve clinical decision making.

Since its founding, Clover Health has been focused on the Medicare Advantage (MA) market. It's a crowded field -- there are more than 3,000 MA plans from private insurance companies -- but the young insurer has steadily gained share. That's produced solid growth in membership and revenue, but it hasn't yet translated to positive cash flow. A good proxy for that is earnings before interest, taxes, depreciation, and amortization (EBITDA). Even when adjusted for non-recurring costs, it's getting worse as a percent of sales.

What's in a number

Management claims that its participants have 22% fewer hospital visits and 23% fewer emergency room visits. However, that's compared to an internal baseline so it's hard to say. A better measure might be the medical care ratio (MCR). It's the percent of insurance premiums spent providing care and services, so lower is better. Clover's platform is proving to reduce the cost of care when removing COVID-related expenses that did not exist in 2019.

Perhaps the most impressive measure is the 92% of onboarded PCPs using the platform for eligible visits. After all, you can't produce results with analytics alone. Even the best algorithms in healthcare require behavior change. That's true for both doctors and patients. Here, the value of the platform is evident.

Despite the success, the company isn't standing pat. It recently launched a direct contracting option. That's a risk-sharing agreement for original Medicare where the company is paid per member and assumes the risk of delivering good outcomes at a cost below what they are being paid. If they do, what they save becomes profit. Direct contracting led to lives under management nearly doubling to 130,000 in the most recent quarter. It plans to end the year with between 70,000 and 100,000 members in the program. The growth sounds great but analysts weren't impressed. At most, that's half of what Clover Health indicated had already signed up when it came public. The discrepancy has called some of management's other claims into question.

Clover Health has an innovative approach to helping physicians deliver better outcomes for patients at a lower cost. Its first offering in the MA market seems to deliver. That market is a whopping $270 billion and is expected to grow to $590 billion by 2025. It's now throwing its hat in the ring for original Medicare. That market was $800 billion in 2019. Those numbers mean the company has a chance to succeed in a big way.

It will still have to overcome healthcare giants with their own Medicare plans like UnitedHealth Group, Anthem, and Cigna. The curious thing about MA and the healthcare industry in general is that a better solution doesn't necessarily guarantee success. The complexity of the shopping experience for consumers and stickiness of existing systems can make it difficult for something new to gain traction.

Clover Health has been able to do that in its few established markets since being founded in 2013. However, as artificial intelligence plays a more prominent role in patient care, the larger insurers have the advantage of more data. Clover Health's early success could simply be the test case that convinces larger players to roll out their own platforms. With the recent craziness in the stock price, investors might want to wait for proof that the company has a path to profitability before buying shares.