Please ensure Javascript is enabled for purposes of website accessibility
Log In Help Join The Motley Fool
Free Article Join Over 1 Million Premium Members And Get More In-Depth Stock Guidance and Research
By Parkev Tatevosian - Jun 12, 2021 at 11:22AM

AMC is best known for its part in the meme stock-trading frenzy, but its business is slowly recovering.

AMC Entertainment (AMC -9.69%) stock has experienced some violent price movements in the last several months -- its price recently came close to doubling in a single day. The stock has been the subject of a virtual tug of war between retail traders and Wall Street, with each side betting on an opposite outcome in AMC's stock price. So far, the retail traders are crushing Wall Street: AMC stock is up 2,230% year to date as of Friday's close. To add fuel to that fire, the summer movie season is under way, and with coronavirus trends all moving in a positive direction in the U.S., AMC could experience a surge in viewers. 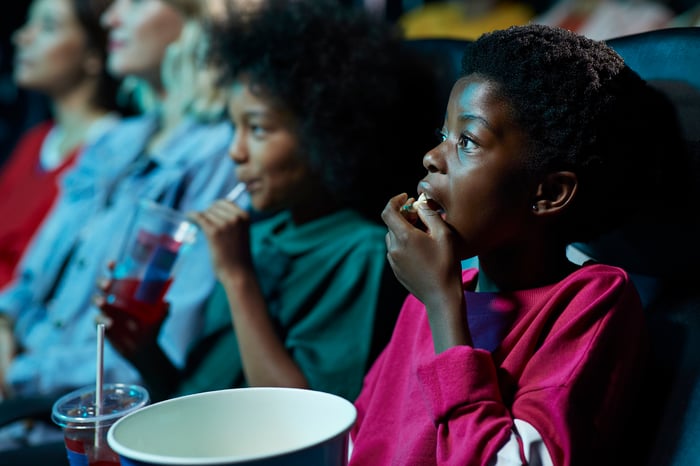 Seats are filling up in AMC theaters again

The summer movie season is off to a great start with the release of two new films: A Quite Place 2 and Cruella. That's just about as good as it can get considering the circumstances. Although nearly all of AMC's theaters have reopened in the U.S, significant capacity restrictions remain.

In roughly two weeks since its release, Walt Disney's Cruella has grossed $86.8 million at the box office worldwide despite being also available on Disney+ (for an additional fee of $29.99 to subscribers). Thus far, the reasonably robust box office total, under restricted seating capacity and a simultaneous release on a streaming service, is good news for AMC.

In contrast, A Quiet Place 2 is opening under a 45-day exclusive theatrical window. Box office totals for the film, released on the same weekend as Cruella, come to $138 million worldwide.

The outperformance of A Quiet Place 2 could be due to the film's exclusive availability at theaters. However, it would be reasonable to expect some folks deciding to watch Cruella on Disney+. Still, getting visitors back inside movie theaters is a win for AMC.

Moreover, F9: The Fast Saga, another part of the successful Fast and Furious film franchise, is set to be released in U.S. theaters on June 25. The ninth installment has already been successful elsewhere in the world, grossing over $250 million at the international box office.

With a few more blockbusters coming into theaters soon, this could be a summer of recovery for AMC.

That could be a huge gain for the company's efforts in removing cash flow problems. AMC burned through $312.9 million in cash in the most recent quarter. That's a rate of about $104 million per month. AMC has to pay rent on its movie theaters whether it has people in the seats or not. Since most of its costs are fixed, getting viewers in attendance generates positive cash flow for AMC even if it remains in negative net-income territory.

On average, an AMC moviegoer spends 72% of the price of a ticket on food and beverage. Add in the fact that AMC makes more in operating profit from viewers buying food and beverage than it does from ticket sales, and AMC could be generating positive cash flow from operations by the end of the second quarter. That is, of course, if there are no further disruptions from a resurgence of coronavirus cases.

The increase in cash flow, combined with the $1.246 billion in equity capital it has raised in recent months, should go a long way toward shoring up AMC's balance sheet and giving the battered movie theater chain more time to recover from the devastations of the coronavirus pandemic. And that should give the millions of retail investors rooting for the success of AMC stock something to cheer about.