The architecture-focused software giant recently put out a bid for the electronics software company.

Architecture, engineering, and construction (AEC) software leader Autodesk (ADSK -1.04%) put out a press release last week announcing a bid to acquire Altium Limited (ALU -0.30%) for around $4 billion. Altium management immediately turned down the proposal, stating that it "significantly undervalues Altium's prospects." This response likely means Altium is looking for a higher bid from Autodesk or is not interested in being acquired at all.

Here's what investors need to know about this potential deal, and what it could mean for Autodesk shareholders.

What is Altium Limited?

Based in San Diego but listed on the Australian Stock Exchange, Altium sells software for printed circuit board (PCB) and electrical engineering design. The applications go for a range of fields, from medical devices to aerospace. Essentially, anything that has electrical circuits in it (which is almost everything these days), Altium can help engineers build. 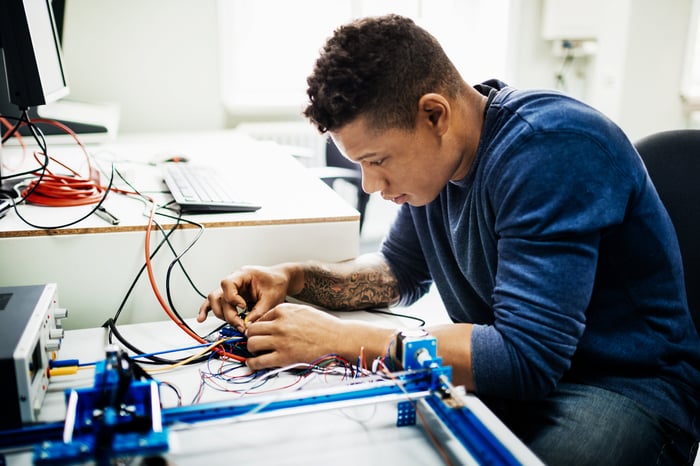 Why would Autodesk want to acquire Altium? Likely because it would be a great addition to its Fusion 360 platform. Fusion 360 is a computer-aided design (CAD) software platform Autodesk launched a few years back. The service combines design, manufacturing, and other parts of the engineering supply chain into a unified cloud-based solution. On top of a Fusion 360 subscription (which typically costs around $500 a year), customers can purchase software add-ons for machining, 3D printing, generative designs, and other products.

With Altium's electronics design tools under its belt, Autodesk could integrate them into Fusion 360, offering them as a bundle to current customers or leaving it as an optional add-on subscription. This can build up Fusion 360's value proposition to customers, while also giving it a scale advantage over its competitors. The combination of Altium's products and Fusion 360 would be a tough bundle to replicate.

The proposed deal would be expensive

At Autodesk's proposed price for Altium of 38.50 Australian dollars a share, Altium would be valued at around $3.9 billion. The offer was a 41.5% premium over the June 4 share price of AU$27.21 (the price the day before the offer was made). With only $186 million in 2020 revenue, that means Autodesk's proposed purchase price is at a price-to-sales ratio (P/S) of 21. Don't forget that Altium management immediately rejected the acquisition offer, which indicates it thinks it can get an even higher bid from Autodesk (or that it doesn't want to be acquired at all).

And it's not like Altium is growing sales at a rapid rate, either. In 2020, its revenue only grew 5% compared to 2019. However, before the onset of the COVID-19 pandemic, it was consistently growing sales around 25% a year, so this current slowdown in revenue might just be a one-time blip. Either way, a P/S of 21 (or higher, if Autodesk raises its bid) would be an expensive purchase for Autodesk. Investors in Autodesk should hope management doesn't overspend trying to acquire this company, especially since it is such a large purchase relative to Autodesk's market cap, which currently sits at around $61.5 billion.

Altium fits perfectly into Autodesk's engineering and manufacturing strategy, but proposing to spend almost $4 billion to acquire a company with less than $200 million in annual revenue doesn't seem like a great long-term investment.