Please ensure Javascript is enabled for purposes of website accessibility
Log In Help Join The Motley Fool
Free Article Join Over 1 Million Premium Members And Get More In-Depth Stock Guidance and Research
By Jeff Little - Jun 15, 2021 at 5:39AM

When future promise meets hype, it's hard to deny the potential.

Six months into 2021, we are still experiencing a market of ups and downs. The S&P 500 is chugging along nicely with a 14% gain year to date, but stocks like Apple (AAPL 0.63%) and Amazon (AMZN -0.26%) -- both of which came out with mind-blowing revenue and earnings numbers earlier in the year -- have somehow failed to climb. In fact, as of this writing, Apple stock is down 1.9% on the year, while Amazon stock has had its moments but is currently sitting at only a 5% gain. Perhaps investors are looking for news on companies that will be life-changing, or even life-saving?

Clovis Oncology (CLVS -1.35%) may fit that bill. As a biotech aimed at improving and saving lives, Clovis is focused on advancing the fight against cancer with treatments for patients across the U.S., Europe, and internationally. 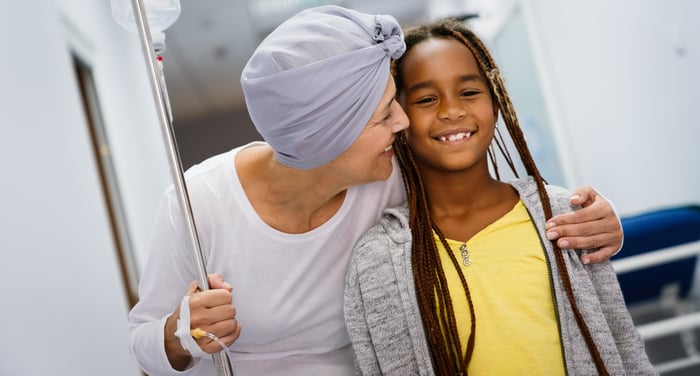 Signs of a breakthrough

In March of this year, Clovis announced that phase 3 trials for its ovarian cancer treatment drug, Rubraca, met their primary endpoint. In patients with advanced relapsed ovarian cancer, the studies found that Rubraca significantly improved progression-free survival when compared to chemotherapy.

Although the U.S. Food and Drug Administration (FDA) granted approval of Rubraca in 2016 for use as a maintenance treatment for ovarian cancer, the new studies show that the drug can be effectively used in relapse patients with advanced disease, for whom there are currently a limited number of options. If approved by the FDA for advanced treatment, Rubraca will provide Clovis with the opportunity to grow revenue while extending the lives of more patients.

The ovarian cancer market, valued at $1.8 billion in 2018, is expected to grow at a compound annual growth rate (CAGR) of 16% through 2027, driven by a growing ovarian cancer incidence rate, increasing health expenses, and a growing number of clinical trials. An expansion into this market could provide Clovis with greater revenue opportunity, building on its 2020 results.

2020 full-year revenue for Rubraca was up 15% over 2019, supported by a 10% increase for the fourth quarter on a year-over-year basis. Clovis also did a nice job of corralling expenses, which were reduced by 22% for the full year compared with 2019, thanks primarily to lowered research and development (R&D) spending on Rubraca trials. The company anticipates those expenses to be further reduced during 2021.

So far, it's making good on plans to continue with its reduction in R&D spend, successfully bringing that number down by $28 million year over year during the first quarter. However, based on first-quarter revenue results, Clovis will need the additional growth opportunity of a growing market to get back to 2020-type revenue numbers and signs of improvement. Revenues for the first quarter of 2021 came in at a less-than-stellar $38 million, an 11% decline from the same period last year.

For investors, the combination of higher revenue and lower expenses during 2020 resulted in an improvement in earnings per share. Though the company still experienced a net loss for the year, the amount of loss per share decreased by 41%, from a loss of $7.43 in 2019 to a loss of $4.38 in 2020.

The company's Rubraca received FDA approval during 2020 as a treatment to help fight prostate cancer, and its product pipeline is putting up a battle with some heavyweight competition. Now, promising clinical trials for advanced relapse of ovarian cancer and a potential stock short squeeze are gaining hype.

The announcement of successful phase 3 trials in March caused the stock price to shoot up by 60% shortly after. Then it slid back down -- until it garnered some notice on Reddit's r/WallStreetBets. The hype on Reddit really didn't do long-term investors any favors. The stock spiked by about 25%, just enough to possibly make some grab-'n'-go retail investors a small profit, but has since started to slide once again slide, even with the short interest still at a huge 31%.

The combination of promise and hype is a great reason to keep an eye on Clovis, especially if you're already invested. An average analyst 12-month price target of $6.63 leaves room for a 15% jump from today's price, and a high target of $12 is a nice teaser. But for now, as the hype cools off, being on the sidelines until second-quarter numbers are reported might be good for those thinking about jumping in.