Please ensure Javascript is enabled for purposes of website accessibility
Log In Help Join The Motley Fool
Free Article Join Over 1 Million Premium Members And Get More In-Depth Stock Guidance and Research
By Zhiyuan Sun - Jun 20, 2021 at 6:31AM

This coronavirus vaccine developer is near the finish line to the already-decided vaccine race.

On June 14, Novavax (NVAX 2.00%) announced that its recombinant nanoparticle coronavirus vaccine, NVX-CoV2373, had demonstrated 93% overall efficacy against coronavirus variants in phase 3 trials -- and that number shot up to 100% for severe or critical COVID-19. The vaccine candidate was also well-tolerated, with serious adverse events spread out equally between placebo and treatment groups.

Unfortunately, shareholders have been acting in a "buy the rumor, sell the news" sort of manner. Shares fell about 10% after Novavax published the results. As of now, the company is pretty undervalued relative to its vaccine production capacity and potential commercialization. Should investors put all their eggs in one basket for this stock? 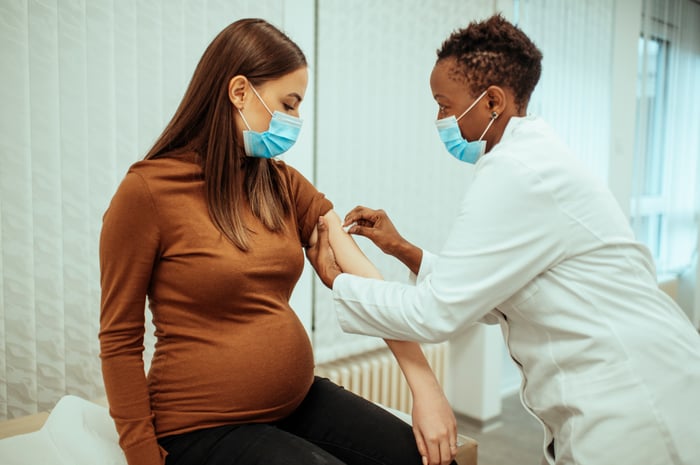 Based on the results, Novavax plans to file for Emergency Use Authorization (EUA) with the U.S. Food and Drug Administration (FDA) in the next quarter for NVX-CoV2373. By the end of the year, the company plans to produce 150 million vaccine doses each month. The company already has advance purchase agreements for 310 million doses with various developed nations. It also finalized a 350 million-dose supply agreement to international vaccine alliance Gavi via its contract manufacturer Serum Institute of India.

The opportunity for Novavax to partake in vaccination campaigns in G7 countries is mostly over. However, the company stands to play a significant role in delivering billions of doses of vaccines to middle- and low-income countries. That's not to mention the potential to supply booster shots as antibody levels decrease over time. Novavax is ready to deploy NVX-CoV2373, having secured over $2 billion in funding since the beginning of the pandemic for this purpose.

But the biggest risk facing long-term investors is sustainability. I do not doubt that Novavax could make billions (or even tens of billions) in revenue by commercializing NVX-CoV2373 next year. But I just can't see Novavax still supplying billions of doses of vaccines in 2025.

What happens when coronavirus vaccine sales fall off a cliff? The company's mRNA vaccine peers, like Moderna (MRNA 3.27%) and BioNTech (BNTX 1.33%), already have that figured out. Both companies are heavily reinvesting their vaccine cash flows into mRNA cancer vaccines. Since this technology involves injecting mRNA-encoded genetic instructions into a patient's body regarding mutations (such as from a tumor sample), it is theoretically scalable across a large variety of diseases.

Unfortunately, Novavax has taken a different approach to research and development. It is historically known for developing influenza vaccines, which typically have low or moderate efficacy. Given the very low fatality rate for that disease, many people tend to skip out on flu shots even when health authorities recommend them.

At this point, Novavax does not have the problem of sustaining its (upcoming) revenue and earnings figured out. Investors should keep in mind that the high likelihood of success for NVX-CoV2373 is largely priced into the stock. I would definitely not go all-in just because the vaccine candidate is highly efficacious. It's best to wait until the biotech has more promising candidates in its pipeline before initiating a stake.