Please ensure Javascript is enabled for purposes of website accessibility
Log In Help Join The Motley Fool
Free Article Join Over 1 Million Premium Members And Get More In-Depth Stock Guidance and Research
By David Jagielski - Jun 23, 2021 at 6:23AM

These companies are generating tons of free cash and don't need to rely on debt to grow.

Interest rates have been at record lows, and that's kept borrowing costs down, with some businesses using the opportunity to add to their debt levels. But that can spell trouble in the future because as interest rates go up, so will interest-related expenses. And that can chip away at a company's bottom line and impact its ability to stay out of the red.

If you're worried about those risks, consider buying shares of Regeneron Pharmaceuticals (REGN 2.32%), Facebook (META 0.22%), and Costco Wholesale (COST 1.59%). With insignificant levels of debt and lots of cash, these businesses aren't likely to make you worried about rising interest rates. 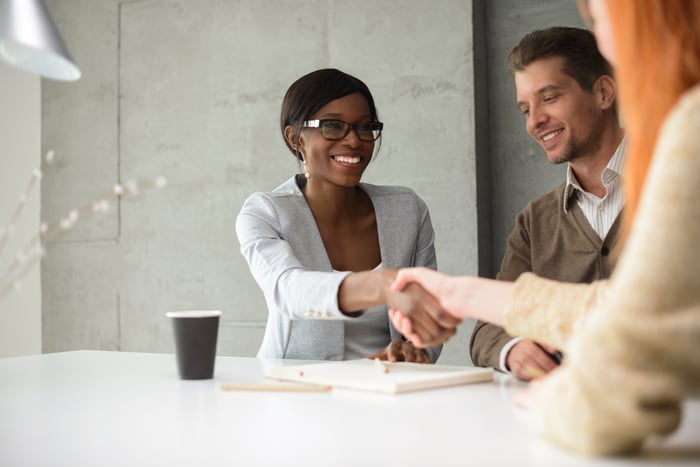 There are many reasons to like healthcare company Regeneron. Its profit margins are normally higher than 40%, and sales have been growing, too.

Profitability isn't a problem, and that's not likely to change, even if interest rates increase. As of March 31, Regeneron reported long-term debt of just under $2 billion. It has five times that amount in its current assets, including $1.4 billion in cash and cash equivalents.

Conservative investors often look for debt-to-equity (D/E) ratios of less than 0.5, and Regeneron's is less than 0.2. The company is in a strong financial position without debt to burden its operations or prevent it from growing. Sales in its most recent quarter (for the period ending March 31) were $2.5 billion, up 38% year over year.

Impressively, Regeneron has been working on a pipeline that includes 30 product candidates serving several different therapeutic areas while still generating free cash flow of more than $2 billion over the past 12 months. When a company is able to bring in loads of cash while also funding clinical trials and long-term growth opportunities, investors get the best of both worlds. Whether you're looking for a safe investment or one that's full of potential, Regeneron is one you'll want to consider today.

Social-media giant Facebook doesn't have any long-term debt on its books. The business has current assets of more than $77 billion that could easily cover all of its liabilities, which total $30 billion. And its financial position is likely only going to get stronger.

Over the past four quarters, Facebook's free cash flow has totaled more than $24 billion. Its cash position is strong enough that it's been able to repurchase $9 billion worth of shares during that time.

The biggest risk facing the company today isn't rising interest rates, but an antitrust lawsuit that could break up its business, with the FTC looking to undo Facebook's acquisitions of Instagram and WhatsApp. However, Facebook's core platform is continuing to grow. Even under a scenario where it loses those two other businesses, it's still likely to remain in good shape.

The company reported daily active users of 1.9 billion as of March 31, which is 8% higher than a year ago. And Facebook says that its metrics for daily and monthly active users do not include the users who are only using Instagram or WhatsApp. While Facebook doesn't explicitly list the revenue that it generates from those businesses, some estimates have them accounting for more than $25 billion in annual revenue -- roughly 30% of the social-media company's top line.

Although Facebook's financials would take a hit under the worst-case scenario in which it loses both Instagram and WhatsApp, the business still looks strong enough to weather the storm, with plenty of cash at its disposal that could allow it to pursue other growth opportunities and acquisitions.

There's some uncertainty ahead with Facebook, but interest rates are the least of the company's worries today. And for long-term investors, the stock remains a solid buy.

Big-box retailer Costco may face some headwinds this year as it goes up against some impressive comparable numbers from last year, when consumers were loading up on supplies amid worries that the pandemic would keep them hunkered down in their homes. The early results are still impressive, with revenue for the 12-week period ending May 9 topping $45 billion and growing 21% year over year.

Even if things slow down for the business later this year when the economy opens up and consumers have more retail choices, investors needn't worry about the role rising interest rates may play in Costco's operations. Although its D/E ratio of 0.46 is the highest on this list, it's still fairly light. Its total long-term liabilities total over $12 billion -- less than half of the company's current assets of $28 billion. Cash and cash equivalents of $10 billion would nearly be enough on their own to cover the long-term obligations.

Over the trailing 12 months, Costco has generated nearly $7 billion in free cash flow. And although it may have benefited from an atypical year in 2020, the company has had no trouble bringing in cash in prior years; free cash flow hasn't dipped below $2 billion since back in fiscal 2016.

While Costco's stock may face some turbulence this year as investors opt for businesses that may be in better positions to profit from the economy opening back up, it's still a solid investment to hold in your portfolio, especially if you're worried about interest rates.

Randi Zuckerberg, a former director of market development and spokeswoman for Facebook and sister to its CEO, Mark Zuckerberg, is a member of The Motley Fool's board of directors. David Jagielski has no position in any of the stocks mentioned. The Motley Fool owns shares of and recommends Costco Wholesale and Facebook. The Motley Fool has a disclosure policy.