Please ensure Javascript is enabled for purposes of website accessibility
Log In Help Join The Motley Fool
Free Article Join Over 1 Million Premium Members And Get More In-Depth Stock Guidance and Research
By Zhiyuan Sun - Jun 24, 2021 at 8:12AM

There is a lot to be excited about with this hot cannabis stock.

That's arguably one of the best in the industry in terms of sales per dispensary. But much of these good results appear already priced into the stock, as its market cap has reached well over $1 billion. Can the company keep up its momentum and continue to deliver wealth to shareholders? 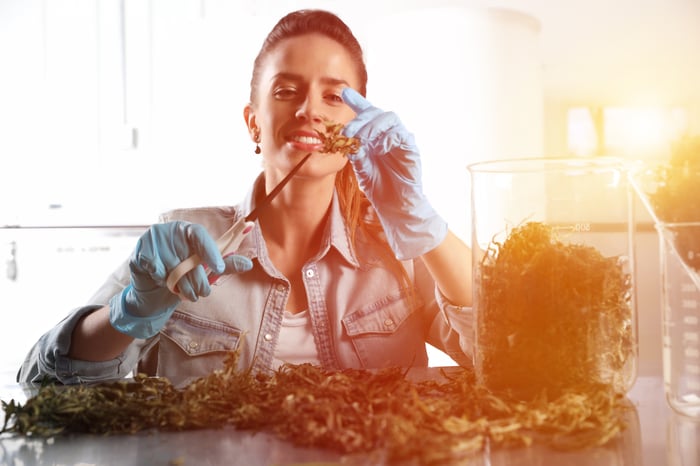 Planet 13 is known for its flagship namesake cannabis store in Las Vegas, which also happens to be the largest pot dispensary in the world. It is located very near the Strip, only a few miles away from the major resorts and casinos. The company is encountering a massive sales boom as Vegas returns to normal post-pandemic, with many of the surrounding hotels reporting sold-out rooms in the near future. Before the pandemic hit, the Planet 13 Vegas store saw over 1 million visitors per year and accounted for 9% of all cannabis sales in Nevada.

In May, Planet 13 witnessed its third consecutive month of record sales, reporting $11.2 million in revenue with a gross margin of 50%. To put that into context, the company did $10.8 million in revenue for the entire second quarter of 2020 at a 43.8% gross margin. The store, which is extremely popular with tourists, is itself a landmark, featuring an in-house coffee shop/restaurant, a live cannabis production facility, and various other attractions. Inside, the store contains everything a cannabis user could want, including high-potency flower, edibles, and vapes. Customers seem to be enjoying it all a great deal, as the store currently has an average 4.7-star review out of 5 stars on cannabis review site Leafly. Aside from this, the company also owns a smaller dispensary in Vegas.

Now, the company plans to replicate its success in California. Planet 13 will soon open a new cannabis store in Santa Ana within driving distance of Walt Disney's Disneyland. The Santa Ana store features a digital waterfall with a vibrant beach-like display.

Can you count on the stock?

Not only is Planet 13 is experiencing rapid sales growth, but it is also profitable. The company increased its net income tenfold to $3 million in the first quarter of 2021 compared with the prior year's quarter. It is also doing well in terms of capital management, with negligible debt and over $140 million in cash on its balance sheet.

Based on its May sales metrics, the company is on track to double or triple its revenue for the entire year. That's not accounting for upcoming revenue with its Santa Ana store. All this makes the stock seem like a great deal at 14.6 times price to sales (P/S). There's still plenty of room to open up mega dispensaries in prime real estate locations, so its growth is sustainable for at least a few years. For its high brand quality, awesome location(s), and surging momentum, Planet 13 remains an affordable cannabis stock to buy now -- and it definitely has millionaire-maker potential over the long term. If it can replicate its past growth, then a $10,000 investment now would be worth over a million within a decade.