Please ensure Javascript is enabled for purposes of website accessibility
Log In Help Join The Motley Fool
Free Article Join Over 1 Million Premium Members And Get More In-Depth Stock Guidance and Research
By Alex Carchidi - Jun 26, 2021 at 6:10AM

Several critical pieces are starting to fall into place for this clinical-stage biotech.

It's a cliché to say that psychedelic drugs can generate mind-altering experiences. But one biotech is betting that it's possible to use psychedelics to help alter for the better the mental states of people who struggle with disorders like depression and anxiety.

Cybin (CYBN -5.16%) is developing medicinal psychedelic compounds, and as the name suggests, its lead program is based on psilocybin, the key active chemical in numerous species of "magic mushrooms." If you're an adventurous investor looking for a possible 10-bagger opportunity, this is one stock you shouldn't overlook, even if the therapies the company is developing might sound a bit unusual at first. Here are three reasons to consider adding it to your portfolio. 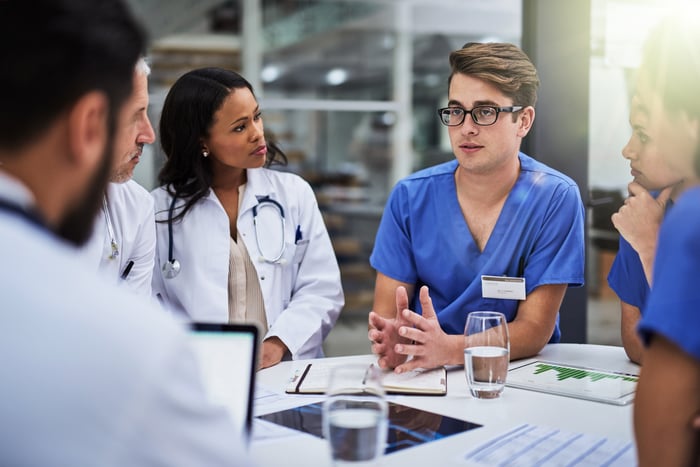 1. There are signs the legal environment may become more permissive for psychedelics

One of the biggest barriers to Cybin's success is that psychedelic drugs are illegal in the U.S. and in many other countries -- but that could change soon. On June 15, the Drug Policy Reform Act was introduced in Congress. Among many other things, the act would decriminalize drug possession and transfer the burden of regulating drugs from the Department of Justice to the Department of Health and Human Services.

If the bill passes, it will doubtlessly lead to a loosening of restrictions on research into psychedelic therapies, which would be a huge boost to that niche. Even if it doesn't, other legislative efforts supporting the decriminalization of psychedelics are already underway this year in California, Massachusetts, Michigan, and elsewhere. So it looks like things are moving in the company's direction along several parallel paths.

2. Cybin's tech platforms are progressing rapidly and into unique niches

Biotechnology companies sink or swim depending on the strength of their technology platforms. In Cybin's case, there are three distinct platforms that matter: one for aiding in drug discovery and staking out intellectual property; another for calibrating drug dosing, optimal delivery, and controllability; and a third for measuring drug efficacy via brain scans of patients. There are a plethora of companies developing psychedelics that (broadly speaking) have platforms covering the first two areas. But Cybin's drug efficacy platform is, to my knowledge, unique in terms of its intended purpose as well as its value proposition.

In short, Cybin is developing a scanning device that can noninvasively measure the brain's responses to being under the influence of psychedelic chemicals. If it's effective, the company will be able to use the device to get detailed quantitative information about the nuances of how its therapies work in clinical trial participants. This would give it data it could use to adjust its treatment protocols or drug formulations, paving the way for it to develop more effective and controllable psychedelic medicines than would otherwise be possible.

Right now, Cybin is sponsoring a feasibility study that tests the brain-scanning device in the context of psychedelic therapy with ketamine. If the project bears fruit, it'll be a giant leap forward for the company's drug development process, not to mention giving it a tremendous competitive advantage in the future.

Over the next year and a half, the company will be starting new clinical trials. On May 18, it cleared a key regulatory hurdle that will enable it later this year to start phase 2a trials of its CYB001 psilocybin formulation as a therapy for major depressive disorder. CYB001 is Cybin's lead program, so any progress on this front could catalyze significant growth in the stock.

Likewise, the company's CY003 candidate for alcohol use disorders and its CYB004 candidate for anxiety disorders are also on course to pass similar barriers and proceed into phase 1 trials shortly thereafter. While management hasn't provided a timeline other than to say that there will be progress in the near term, investors who buy the stock now will reap the benefits of any post-trial-initiation stock bumps.

Finally, on June 8 the company announced that it would be sponsoring a clinical trial examining the efficacy of psilocybin-assisted psychotherapy in healthcare workers who are experiencing depression, anxiety, and post-traumatic stress as a result of working on the front lines during the pandemic. Positive results from that trial would be further evidence in favor of Cybin's therapeutic approach, though it wouldn't directly lead to any new opportunities for revenue.

There's still a long and difficult path ahead

Despite the three reasons why I think it's worth buying Cybin, there's one reason for current shareholders to sell it. The restrictive regulatory environment makes this stock even riskier to own than a typical early-stage biotech.

To succeed, Cybin needs to develop the right technologies and drugs, advance those drugs through the clinical trial process, and then actually sell the new therapy in a market where it's legal to do so. If there's nowhere legal to consume psychedelics medicinally, investors in the company will be left high and dry.

If that type of risk seems excessive to you, this is a stock you should stay away from.

Could Cybin Be a Millionaire-Maker Stock?