Please ensure Javascript is enabled for purposes of website accessibility
Log In Help Join The Motley Fool
Free Article Join Over 1 Million Premium Members And Get More In-Depth Stock Guidance and Research
By Jason Hawthorne – Jun 29, 2021 at 6:36AM

The company has a steady business but a big liability hanging over its head.

Many investors are aware of the reasons to invest in Johnson & Johnson (JNJ 0.13%). It is big, diversified, and sports one of the healthier dividend yields in the Dow Jones Industrial Average (DJINDICES:^DJI). They're even well-versed in a big reason to avoid it -- the company's recent history of legal issues.

A deeper dive can help lay out just how much someone should weigh each of those factors. It can also serve as a reference point if the reasons for buying change. Without further adieu, here are three reasons the company could be right for your portfolio and one to place your chips elsewhere. 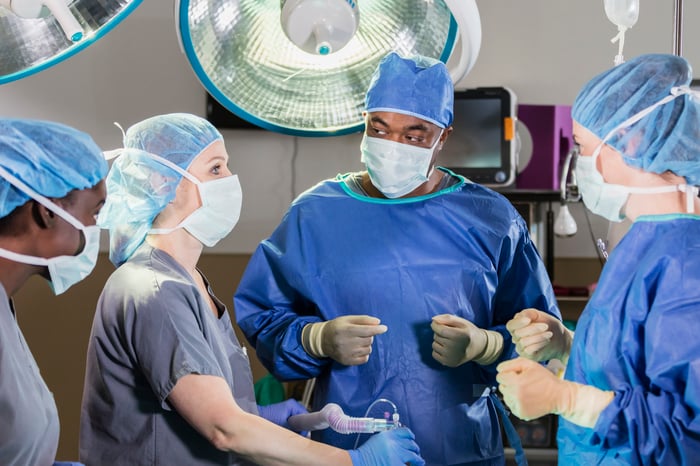 1. The company is practically a global healthcare index fund

Johnson & Johnson is not just the largest publicly traded healthcare stock by market cap, it might also be the most-diversified. Breaking down its sales by business, as well as geography, highlight a company with its eggs spread across a lot of baskets.

The company's largest business is pharmaceuticals. Its portfolio of drugs treat everything from cancer and cardiovascular diseases to immunology and infectious diseases. That last category will benefit from its COVID-19 vaccine. Its best-selling drug is Stelara. It treats plaque psoriasis and psoriatic arthritis and generated $7.7 billion in sales last year. The drug continues getting approved for new indications, leading to 15% growth last year.

Medical devices account for more than one-quarter of sales and are spread across service lines like orthopedics and vision. Instruments and surgical systems contribute significantly in this area too. Johnson & Johnson has also made a few meaningful acquisitions to bring in new, innovative technology. More on that below. Finally, consumer health -- the segment famous for items like Tylenol, Neosporin, and Band-Aids -- accounted for a little more than one-sixth of sales.

Similar to its lack of reliance on any one part of healthcare, the company's sales are also spread across the globe. Although the U.S. accounts for a little more than half of total revenue, management claims it operates in just about every country in the world.

2. A paycheck and raise you can count on

That diversification provides stability in all kinds of economic cycles. It also helps dampen the effects from any problems in one business unit. The predictability has allowed management to pay increasing dividends for the past 59 years. The 2.6% dividend is respectable. However, thanks to the distribution increases, those who bought 20 years ago will be getting checks this year that amount to 7.7% of their initial investment. That's the power of holding a dividend grower for the long term.

Despite that history of growth, the company still has plenty of room to keep raising the payout. It distributed just 62% of earnings last year and 51% of free cash flow. That last measure -- the cash dividend payout ratio -- has bounced between 50% and 60% for a decade. Not only is the dividend not going anywhere. Management isn't raising it any faster than its ability to pay it. That's a conservative approach that should let risk-averse investors sleep well at night. 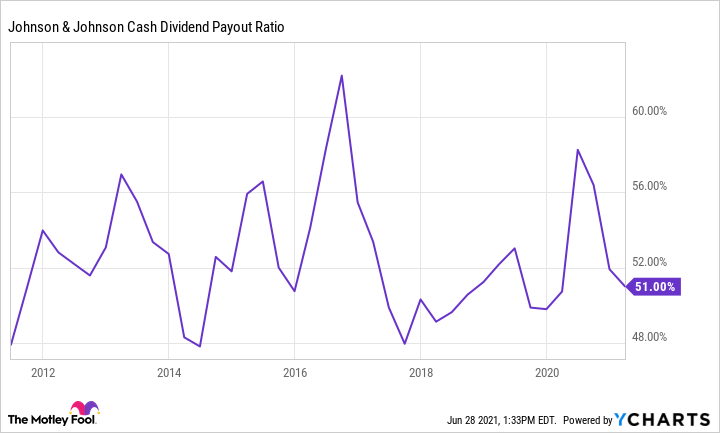 3. Buying its way into growth areas

Another thing stability and free cash flow allow Johnson & Johnson to do is acquisitions. Recently, the company has been using those to target medical device companies bringing robotics and data science to the operating room.

In 2019, it acquired both Auris Health and Verb Surgical. Auris was founded by Fred Moll, who also founded Intuitive Surgical. His latest venture has been focused on lung cancer, but Johnson & Johnson sees more potential applications for its Monarch surgical system.

Prior to being purchased, Verb Surgical was a collaboration with Alphabet's Verily. It's bringing analytics and artificial intelligence to surgery. CEO Alex Gorsky has called it "computerized surgery." The term might not catch on with patients, but it's just starting to scratch the surface of the market potential.

It's hard to quantify the company's potential liability

Despite a storied history that traces back to the 1880s, the company has had a string of product recalls across its divisions in the last two decades, as well as billions in settlements. The reasons range from marketing a drug to patients it wasn't approved for, promoting another drug for unapproved uses, allegations that its talc baby powder contained cancer-causing asbestos, to flawed hip implants, and others. Perhaps the most worrisome is Johnson & Johnson's exposure due to its role in the opioid crisis.

Although much of the blame for the opioid crisis has fallen on the brand name makers of the addictive painkillers, some companies further up the supply chain have also been implicated. Johnson & Johnson is among them. The company pushed development of a 'super poppy' in the 1990s that was especially dense with opiates which it processed it into oxycodone and hydrocodone. The company has previously pledged $5 billion to settle claims and agreed to pay the state of New York $230 million a few days ago.

Johnson & Johnson also shut down its opioid business last year. That said, the state by state litigation leaves a lot of potential liability. In 2019, an Oklahoma judge ordered the company to pay $465 million for its role in that state's crisis. That was a lot less than the $9.3 billion the state attorney general was asking for. It remains to be seen how cases in other states play out. Either way, it is a wildcard that could end up costing the company billions more than it is planning for.