Please ensure Javascript is enabled for purposes of website accessibility
Log In Help Join The Motley Fool
Free Article Join Over 1 Million Premium Members And Get More In-Depth Stock Guidance and Research
By Rich Duprey - Jun 29, 2021 at 8:57AM

You may have paid a pretty penny for your connected treadmill, but the manufacturer can still change the rules about how you use it later.

All the sweat Peloton Interactive (PTON -6.88%) has put into recovering from its treadmill recall is at risk of being wasted after the company reportedly made moves to "brick" customers' fitness equipment if they didn't sign up for its monthly exercise programs.

While Peloton maintains that it's for safety reasons that customers pay for those $39 a month subscriptions after having shelled out over $4,300 for the treadmill, the high-end exercise equipment maker may find it ends up making fewer sales if it doesn't resolve the situation favorably for customers. 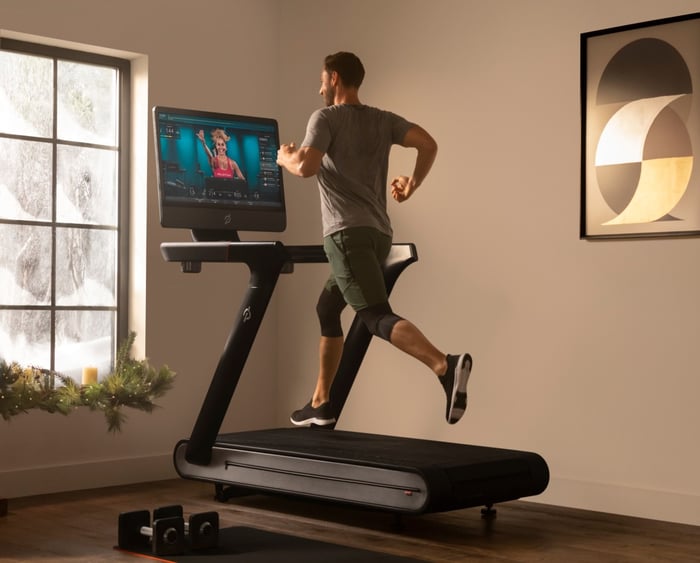 Following the tragic death of a 6-year-old child who was pulled under one of its treadmills, and a few dozen reports of injuries to children and pets, Peloton issued a recall through the Consumer Products Safety Commission to allow it to install locking devices that could only be disabled by entering a four-digit code.

But the company seems to be compounding its problems by telling customers that the unlocking codes they receive will only be good if they sign up for its $39 per month exercise class subscriptions.

In an email to customers, Peloton said the "Just Run" feature of its upscale Tread+ treadmill that enabled users to use the device like a regular treadmill without accessing the company's digital content had been disabled by the locking device. It noted, "Unfortunately at this time, 'Just Run' is no longer available without a Peloton Membership."

Because the Just Run feature was just a bit of software within the Tread and Tread+ systems, Peloton was able to disable it.

Wow. The Peloton Tread will no longer allow you to use your $3000 treadmill without a $39.99 a month subscription.

The pretext is their design issues that led to a child's death.

Hope reporters will cover this. pic.twitter.com/XHKS6DaOeD

While Peloton says it is working on a fix to restore the Just Run capabilities for everyone and is waiving the monthly fees for three months, it does reveal a potential dark side of the connected fitness trend, one that theoretically extends to the connected home, too.

Consumers who become tethered to a company through subscriptions for their devices could find themselves at the mercy of that company's membership or subscription requirements. At least based on this report, Peloton apparently has the power to essentially turn its workout equipment into an expensive and inert piece of sculpture if it so chooses.

Of course, the connected fitness powerhouse would do so at its peril. Peloton generated more than $1.8 billion of revenue in its fiscal 2020 (which ended June 30, 2020), double the amount it took in during the prior fiscal year, and it is on course to handily beat that figure in fiscal 2021.

Although subscription revenue accounts for approximately 20% of its total sales -- $590 million in the first three quarters -- it would be foolish for the company to put its reputation at risk for such a comparatively small slice of its business. Among its more than 2 million connected fitness subscriptions a good number are people who have signed up for the exercise classes alone, and don't have a Peloton treadmill or connected exercise bike.

Peloton basically has three months to come up with a fix or risk the wrath of customers who thought they owned their treadmills outright after plunking down thousands of dollars for them, only to find out they are still on the hook for $40 a month subscriptions fees for the life of the devices.

The stock price of the upscale exercise equipment maker has rebounded 50% from the lows it hit following the recall announcement. Whether it was the public backlash that caused Peloton to begin searching for a quick fix or whether that was the plan all along, the company risks damaging its brand and its share price if potential customers decide that a perpetual contract with their treadmill provider isn't something they're eager to sign up for.

Randi Zuckerberg, a former director of market development and spokeswoman for Facebook and sister to its CEO, Mark Zuckerberg, is a member of The Motley Fool's board of directors. Rich Duprey has no position in any of the stocks mentioned. The Motley Fool owns shares of and recommends Facebook, Peloton Interactive, and Twitter. The Motley Fool has a disclosure policy.