Please ensure Javascript is enabled for purposes of website accessibility
Log In Help Join The Motley Fool
Free Article Join Over 1 Million Premium Members And Get More In-Depth Stock Guidance and Research
By Eric Volkman - Jun 30, 2021 at 7:07AM

Pride Month is a good time to be proud of these pioneering corporate leaders.

June is Pride Month, a time to celebrate and heighten the achievements of the LGBTQ+ community. Individuals in the community have made great strides in nearly every aspect of modern life, and more and more these days, that includes the C-suite.

In fact, LGBTQ+ executives have made it to the very top of the corporate food chain as leaders of some of the most popular publicly traded companies in the world. Read on for more about three LGBTQ+ CEOs that are busy shaping the world. 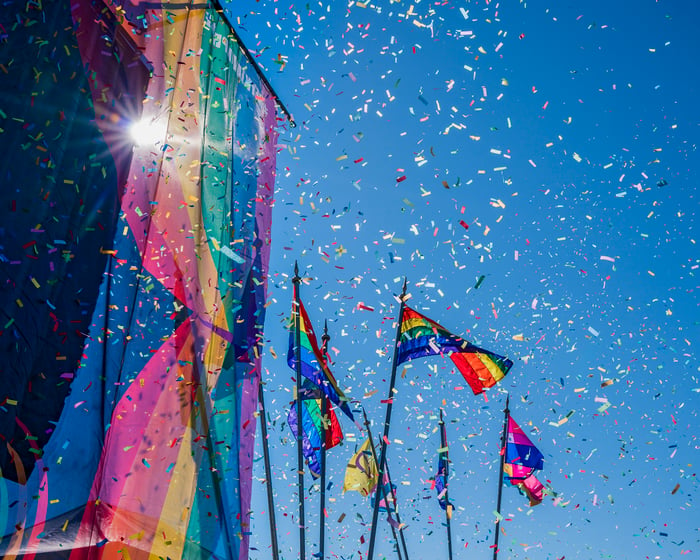 Arguably the best-known LGBTQ+ CEO, Cook had one of the hardest acts to follow in the history of American business -- succeeding Apple's (AAPL -0.23%) beloved co-founder and leader Steve Jobs. But that succession is becoming a distant memory, as Cook -- previously Apple's COO -- has been on the throne for nearly 10 years. This is an extremely long tenure by major U.S. corporation standards, not to mention the fast-moving world of Big Tech.

While the ride hasn't always been smooth over that stretch of time, Cook has guided Apple to ever-growing heights of financial success and popularity. Over the past five fiscal years, the mighty company has leveraged its considerable competitive strengths to grow both revenue and net profit by nearly 30%.

Along the way, its monster popularity with investors pushed its market capitalization to the point where it became the first company in history valued at over $1 trillion. That was in 2018; two years later, it doubled down on that feat, rising to a $2 trillion valuation.

Cook and Apple show no sign of slowing down. The company keeps its durable lineup of iProducts fresh with regular upgrades and has numerous sources of revenue -- like the successful (if occasionally controversial) App Store -- that keep the cash flowing in.

Many investors are expecting the retail sector to bounce back from the shutdowns and lock-ins of the coronavirus pandemic. If that occurs, one man on the forefront of that recovery will be Jeff Gennette, CEO of battered Macy's (M -0.54%). Gennette has been at Macy's almost exclusively for nearly four decades, beginning his service at the company way back in 1983 as an executive trainee and rising patiently through the ranks.

Macy's needs a steady veteran like Gennette as a leader. Even before the pandemic, the company was a poster child for the retail apocalypse, suffering from stagnant sales and weak profitability when it didn't land entirely in the red. The environment is getting better, though, with Macy's posting a surprise Q1 net profit on higher-than-expected revenue and consequently raising its full-year guidance significantly.

It's not out of the woods yet, of course. There's still a high number of brick-and-mortar stores, so Macy's must find effective ways of getting the public to shop live in its outlets. The let's-finally-get-out-of-the-house bounce it's seeing as the pandemic wanes is sure to fade. Still, Macy's certainly has a fighting chance with its seen-it-all CEO at the helm.

The founder, chairperson, and CEO of biotech company United Therapeutics (UTHR 0.82%), Rothblatt is one of the very few transgender CEOs in American business. But that's far from the most interesting aspect of her life and career. Trained as a lawyer, Rothblatt's fascination with satellite communications led her to co-found the company that would ultimately become the top dog in that industry, SiriusXM.

In the mid-1990s, Rothblatt's daughter Jenesis was diagnosed with a potentially fatal disease, pulmonary arterial hypertension (PAH), an "orphan disease" (i.e., one not common enough for most drugmakers to develop treatments for). Undaunted, the lawyer/entrepreneur became an expert on the affliction and created a company -- United Therapeutics -- to develop and bring to market effective PAH therapies.

Within only a few years, United accomplished its mission, receiving Food and Drug Administration (FDA) approval for Remodulin in 2002. After years of success, however, the prominence of the drug is fading because it no longer enjoys patent protection and must face competition from generics.

Yet United continues to do well in the hypertension realm, thanks to its more recently approved Tyvaso, which has recently posted double-digit sales growth. That, combined with a considerable pipeline of products in various stages of development, means the Rothblatt-led United has a potentially very bright future in front of it.