The renewable energy industry is slowly upending a multi-trillion dollar electricity market worldwide and a decade or two from now it could make most fossil fuels obsolete. Wind and solar energy are now beating coal, nuclear, and natural gas on a cost basis and electric vehicles could dominate the transportation market before the middle of the century. That's a long runway for disruptive renewable energy stocks to grow into.

We asked three of our energy contributors for their top long-term renewable energy picks. Bloom Energy (NYSE:BE), NextEra Energy (NYSE:NEE), and Seimens Energy (OTC:SMEG.F) bubbled to the top and are certainly built to thrive for the next decade or more. 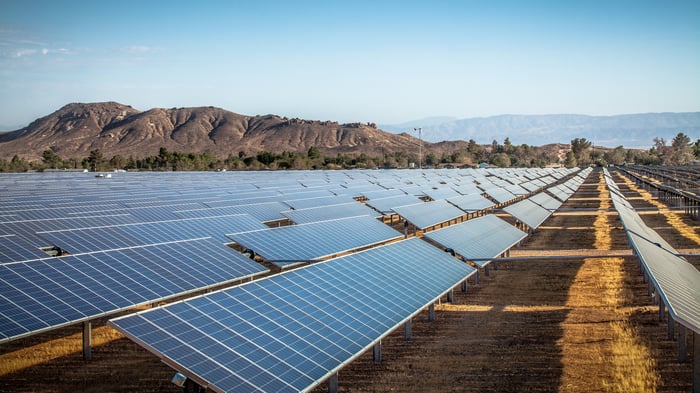 Travis Hoium (Bloom Energy): Hydrogen is one segment of the renewable energy industry that's just getting off the ground. Hydrogen can be used as a fuel, replacing fossil fuels, for a variety of applications from transportation to power plants to local backup power. And through a process called electrolysis hydrogen can be created with water and electricity as inputs. If wind, solar, or other clean energy is used, we can now create "green hydrogen" and enable a clean energy ecosystem.

Bloom Energy is a leader in the hydrogen space, and has been making fuel cells for businesses and utilities for more than a decade. The company's solid-state fuel cell technology should cost less than competing proton-exchange membrane technology in the long term and allows a fuel cell to be run backward, creating hydrogen at times and consuming it to produce electricity when needed.

Bloom Energy has also been improving financially at a rapid rate. You can see below that revenue is up slowly but steadily since the start of 2019 and margins and losses are improving as well. Like other renewable energy technology, revenue growth is often underwhelming at times when costs are rapidly falling because installation growth needs to overcome price reductions. For example, in the first quarter of 2021, the company installed 40.2% more kilowatts of fuel cells than a year earlier, but revenue was up just 23.8%. That's a challenge for the top line now, but the falling cost trajectory should be great for the adoption of fuel cells and hydrogen over time, which will ultimately lead to revenue growth. 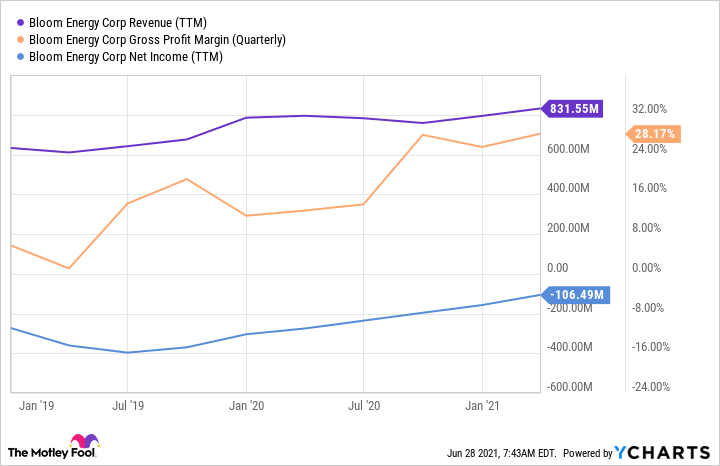 There's a lot of optionality in hydrogen and fuel cells. It can be a source of energy storage for the grid and businesses, fuel for the shipping industry, and could even be used for carbon capture. As an industry leader with improving finances, Bloom Energy is set to thrive for a long time into the future.

Long-term security in a growth sector

Howard Smith (NextEra Energy): NextEra Energy gives investors the benefit of diversity within one stock holding. It is the parent of electric utilities Florida Power & Light and Gulf Power, but also includes a renewable energy subsidiary, NextEra Energy Resources. The future of renewables looks bright. Even during the pandemic crisis, renewables were the only energy source for which global demand increased in 2020, according to the International Energy Agency.

NextEra Energy Resources is a leader in wind and solar power and it has a backlog of renewable energy projects that's even greater than its current portfolio. That expanding portfolio should have plenty more runway for growth. The U.S. solar market now has more than 100 gigawatts (GW) of generating capacity, according to a new report released by the Solar Energy Industries Association and research group Wood Mackenzie. That represents twice the solar generating capacity versus just three and a half years ago.

Investors must also consider risks with any growth industry, making it difficult to know whether a company can thrive well into the future. But NextEra Energy's utility business provides a hedge. It offers shareholders a reliable dividend since it has a secure cash stream. And as that dividend has grown over the past three years, so has the stock price and the company's valuation. 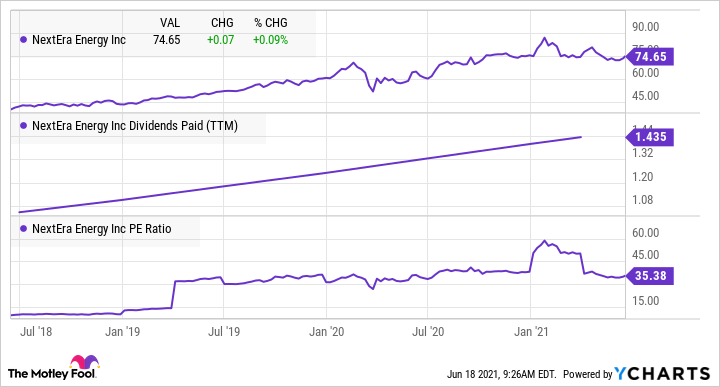 NextEra told investors in its recent fourth-quarter earnings release that it plans to continue to increase the annual dividend by about 10% through next year. With the support of the growing renewables business, it also predicts between 6% and 8% annual earnings growth through 2023.

NextEra Energy has a balanced business and looks to be set to succeed well into the future. It's not a typical utility, however, and income investors can't expect as high a dividend yield as most regulated utilities offer. But for investors with the right expectations, NextEra Energy is a good renewable energy name to include in a portfolio.

Daniel Foelber (Siemens Energy): German integrated industrial giant Siemens may not be what comes to mind when investors think about long-term renewable energy investments. After all, Siemens is so diversified that its renewable plays are dwarfed by other endeavors.

However, Siemens owns a minority stake in the newly independent Siemens Energy, which has a 67% stake in Siemens Gamesa Renewable Energy. Siemens Energy is tailor-made for renewables investors, combining a strong industry-leading gas turbine and power transmission portfolio with renewable investments.

Although about 80% of the value of Siemens Energy is due to its stake in Siemens Gamesa, the company's gas and power business supplied roughly two-thirds of Siemens Energy's second-quarter 2021 revenue. The disparity is mainly because the vast majority of Siemens Gamesa's projects are still in the works. In fact, Siemens Gamesa's order backlog is now 33.7 billion euros as orders rose 150% in Q2 compared to the same quarter in 2020. For the full fiscal year, Siemens Energy is guiding for a 2% to 6% nominal revenue growth rate in its gas and power business, and adjusted EBITDA margin to be between 3.5% and 5.5%. For Siemens Gamesa, it expects nominal revenue growth of 8% to 11% and an adjusted EBITDA margin of 3% to 5%.

In all honesty, these numbers are not that impressive. In fact, revenue and adjusted EBITDA guidance for both segments are lower than what Siemens Energy previously provided. What the company lacks in short-term performance it makes up for with the sheer size and scope of its renewable investments. These projects will take time to develop and scale. But five to 10 years from now, Siemens Energy could be a thriving industrial and wind energy company.

These three stocks offer very different ways to play the growing renewable energy industry but they're leading in their respective segments. And over the next 10 or 20 years they're all built to pay off well for investors.

These Renewable Companies Are Set to Thrive Long Into the Future @themotleyfool #stocks $NEE $BE $GCTAF $SMEG.F Next Article
Current