Alector (NASDAQ:ALEC) was one of the most electrifying stocks on the market Friday, experiencing a monster 53% pop in midafternoon trading. This was entirely justified, given the company's announcement of an exciting new collaboration deal.

Friday morning, Alector and pharmaceutical industry giant GlaxoSmithKline (NYSE:GSK) announced a pact under which they will jointly develop and (if all goes well) commercialize a pair of monoclonal antibodies that can aid in the treatment of various neurodegenerative afflictions. 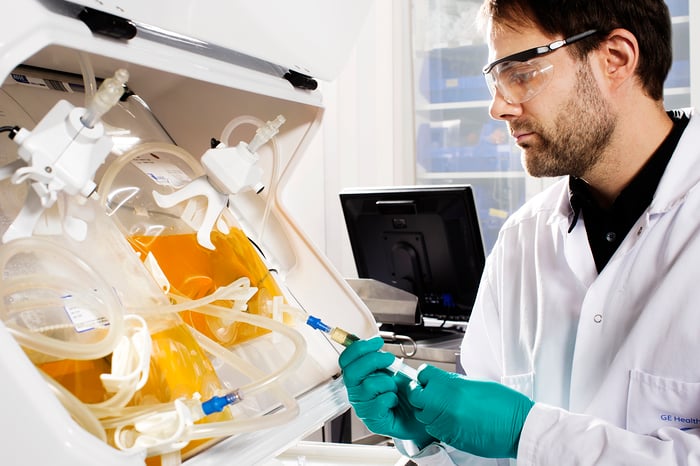 The terms of the arrangement stipulate that Alector is to be provided $700 million in upfront payments. It stands to make up to $1.5 billion more when and if those antibodies hit various developmental, regulatory, and commercial milestones. The company will spearhead the global clinical development of the antibodies through phase 2 proof of concept. Following that, it and GlaxoSmithKline will divide the development responsibilities, splitting their costs.

Should they reach the commercial stage, in the U.S. Alector and GlaxoSmithKline will be equally responsible for commercialization, and will share profits (or losses). Outside of the U.S., the latter company will handle commercialization, with Alector being eligible for royalty payments.

This deal is unquestionably a game changer for Alector. For perspective, that $700 million in upfront payments dwarfs the biotech's existing sales, which totaled slightly over $21 million in 2020. But it's not only the finances that matter here -- GlaxoSmithKline is a powerful company with significant resources, and should therefore make an excellent partner for the two projects.