The stock of AeroVironment (NASDAQ:AVAV) is having a rough landing this week, having dropped nearly 10% as of the market close Thursday. The big fall came on Wednesday after the drone maker announced its fourth-quarter and full-year 2021 earnings (the company closes its financial year on April 30).

Remarkably, AeroVironment exited the fourth quarter and fiscal 2021 with record revenue and backlog and beat its net income guidance. But the market was still miffed thanks to undue attention on one number.

Back in March, AeroVironment upgraded its revenue outlook to a range of $400 million to $410 million for the full year, backed by strong ongoing demand and a string of acquisitions. On July 29, though, the drone maker, which primarily serves the U.S. government (specifically the Department of Defense), reported revenue worth only $394.9 million. The shortfall was almost entirely because of lower sales for its High-Altitude Pseudo-Satellite systems (HAPS). 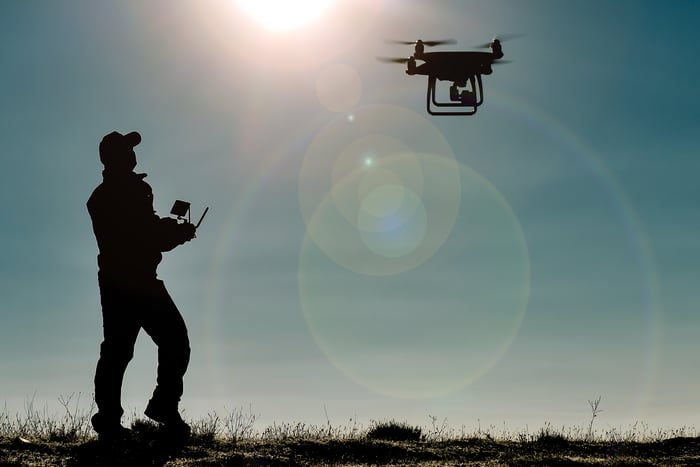 While management didn't provide a firm reason for the lower HAPS revenue, pandemic-induced travel restrictions were cited as one of the factors during the fourth-quarter earnings conference call. AeroVironment develops HAPS for HAPSMobile, a joint venture majority owned by SoftBank with a 7% stake owned by AeroVironment.

Because HAPS contributed 11% to the company's revenue in 2021, lower sales offset higher demand for AeroVironment's core products like tactile missile systems and small unmanned aircraft systems. All of these are collectively part of AeroVironment's largest segment, UAS. Its other segment, Medium Unmanned Aircraft Systems, or MUAS, consists of its recently acquired Arcturus business.

AeroVironment still grew its UAS revenue by 3% in 2021 and earned net income worth $23.3 million in 2021, which exceeded management's expectations. Also, its funded backlog more than doubled sequentially and hit a record high of $211.8 million at the end of the fourth quarter.

AeroVironment's numbers don't leave much room to complain, but the market is evidently paying too much attention to the company's revenue shortfall and ignoring its backlog growth. To be fair, recent acquisitions added to its backlog number and it remains to be seen how successfully the company can unlock value from the acquisitions.

For now, AeroVironment's 2022 outlook looks hugely encouraging. It is projecting:

With that kind of growth visibility, this defense technology stock could be headed for better days ahead after its fall in recent months.